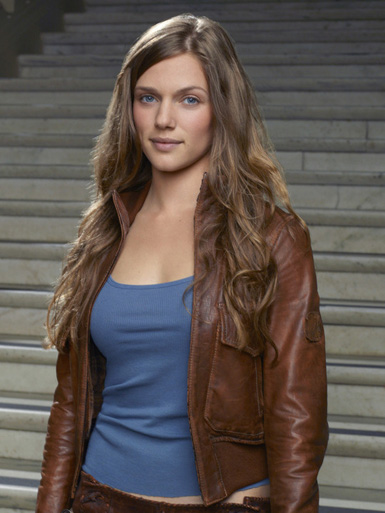 Every great adventure tale needs a hero that is someone we can root for and in REVOLUTION, that is Charlie (Tracy Spiridakos) – a headstrong young woman bound and determined to rescue her brother from the evil clutches of a despot.  But unbeknownst to Charlie, she had a lot more family than just a brother after her father was killed; she had an uncle and a long-lost mother who she thought was dead.  So while in the mid-season finale, we saw Charlie reunited with her brother and her mother, that reunion may be tenuous as they flee the wrath of Col. Sebastian Monroe (David Lyons).
At the recent WB Mondo International Press Tour, star Tracy Spiridakos provided insight into the tumultuous relationship between Charlie and her nefarious uncle Miles (Billy Burke), as well as taking about how physically demanding the role is, and what she loves about the show.

Exploring the relationship between Charlie and her uncle Miles, they started out she just kind of idolized him a little bit even though she hadn’t quite met him, gotten to know him.  As she’s getting to know him, she’s learning he has kind of a dark history and dark past.  Would there be, at some point, she’d feel like she’d have to cut him loose or sacrifice him for the greater good?
TRACY:  I don’t think she would have to distance herself from him for the greater good.  At least that’s not how I see that going.  She starts off at the beginning idolizing him because he’s the guy that’s going to help her get there, but very quickly, when she starts finding out all these things about him, is a little weary, which kind of takes her into a place where he tells her to do something and she would question him all the time.  Because the more she finds out about him, the worse it is.  And I think the development of their relationship has finally come to a place of understanding each other a little bit more, accepting each other for their pasts, for Charlie, for her mistakes and for being kind of new to this whole thing.  Where at first he would kind of be a little bit more short with her, he gets it more now and he sees where she’s coming from.  And I think they’ve really developed a strong bond.  I think it’s really cool.  I really like where their relationship has grown to.

Since the characters are sort of divided down into the two groups battling it out, what’s that dynamic like when you all hang out and you’re friends?  Does it make any difference with what you’ve been doing against each other during the day?
TRACY:  No, not at all.  We really have a lot of fun.  Everyone’s really sweet.  Even David Lyons plays Monroe, and he plays such a good bad guy that you want to not like him.  And then you talk to him for, like, a second and you just want to hug him.  Like, he’s so sweet and lovely.  And same with Strausser (David Meunier) who plays this kind of crazy maniac, and he’s a lovely human being as well.  So we really have fun.  Between the lot of us, we do tease each other a lot.  We make fun of David [Lyons] because he and JD [Pardo] are really just easy targets.

Do you know more in the story than we do in terms of answers to some of the big questions, or are you as in the dark as we are?
TRACY: I only know a little bit just because we are a couple episodes ahead of what’s aired.  But outside of that, I have no idea, yeah.  I know nothing.  And we try.  We try to guess with each other.  Or we’ll send an e?mail to Eric just to see if he’ll spill, and he won’t, he’s tight?lipped.

So your role as Charlie is one of the most physical roles on the show.  It’s incredible.  What exactly are you having to do to maintain and train for all that craziness?
TRACY:  Our schedule is pretty intense, so there’s not a whole lot of time for working out other than the weekends here and there.  But because we’re doing so much running on the show every day and that’s how we kind of keep at it.  So genuinely, not a whole lot of training time beforehand.  But I’ve grown up with brothers my whole life, and I love the stunty aspect of it all.  So I’m right in there, any opportunity that I get.

Charlie uses the crossbow almost exclusively.  It’s amazing.  You’ve got to have some training with that.
TRACY:  You know what, the crossbow isn’t necessarily the hardest one, because it’s not like the bow and arrow.  The crossbow is more of like a point?and?shooter, so it’s just about loading it.  But I’ve dabbled with some other weapons coming up, which I’m not going to tell you about.  But that, we’ve done some training before.  And it’s usually just kind of in between takes.  When they’re filming somebody else’s scene, I’ll go to another side and I’ll kind of dabble in the other stuff.

It must be fun for all of you, because someone as beautiful as you doesn’t usually get to run around and kick ass the way you do.
TRACY:  Yeah, I love this stuff.  Like I said, I have two brothers.  I’m a huge tomboy.  I was playing football and soccer and street hockey my whole life.  So getting to do a show like this is really a dream come true, and I’m having fun, a lot of fun.

How are you most like and how do you differ most from your character?
TRACY:  I’m most like Charlie by I definitely am stubborn, don’t like to be wrong, and I love the action, kind of danger/adventure kind of stuff, I would say, as much as she’s kind of jumped into it.  How we differ Charlie kind of starts out a little kind of wide?eyed and a little naive, maybe, in moments.  And I think that maybe that was me a few years back, but I’m not very much like that anymore.  So that would probably be our difference.

How different is Charlie from all the other lady characters we can see on television?
TRACY:  I think the cool thing about Charlie is that she has a really good balance of being vulnerable and strong.  Eric [Kripke] puts it best by describing her as Dorothy with a sword.  And I think that’s kind of what makes her really unique in the fact that a lot of times you see the woman, the strong female characters who are already strong, whereas with Charlie, we get to watch her progress into becoming this warrior that we hope to see her become.  So she’s getting tougher and tougher as it goes along, and getting to watch that growth is what I think is very interesting and unique.

Do you like sci?fi?
TRACY:  I enjoy my sci?fi, yeah.  I like a little bit of everything.  Except horror, because I’m a wuss.  But outside of that, I do, yeah.  I think it’s fun.  I like being able to jump into something outside of my regular world.  That’s why I like playing video games and stuff, because I feel like I can really leave all my stuff behind and go into another universe, almost.

And do you like other sci?fi shows?  What kind of TV shows do you watch?
TRACY:  Well, I’ve just started watching LOST and it’s great.  I love it. BATTLESTAR GALACTICA is a great show.  I love that one. To think off the top of my head right now, but those are the two that I’m in the middle right now, yeah.  I love them.

A lot of people are doing that with TV these days. Is that something you enjoy?
TRACY:  Oh, special features are really cool. I want there to be a blooper reel, because I think they’re fun and funny.  And I fall a lot.  That’s kind of the ongoing joke.  I’m a little clumsy, like a little puppy with brand?new feet.  And so I think it would be really fun for everybody to just see.  I mean, we really have a lot of fun on the show.  We have a lot of fun filming, and we’re very close.  So I think it would be really cool for everyone to see kind of the drama and the heaviness that goes on and then to counteract it with seeing how we really are behind the scenes.  And I love being a part of the whole thing.  I mean, getting this job is definitely a dream come true.  I couldn’t be happier.  The fact that everyone’s enjoying the show so much.

Do you like watching shows on home video?  Like, is that how you’re watching LOST?
TRACY:  Yeah.  On Netflix, I’m watching it, yeah, if I get to, because my schedule is so wonky that I don’t get to really follow anything specifically, because our hours are all over the place.  So I just bought a little iPad and I watch it on my iPad.

To see more of the developing family drama between Charlie and her newly rescued mother Rachel and Mile, be sure to tune in for all new episodes Monday nights, starting March 25th at 10PM on NBC (City in Canada)