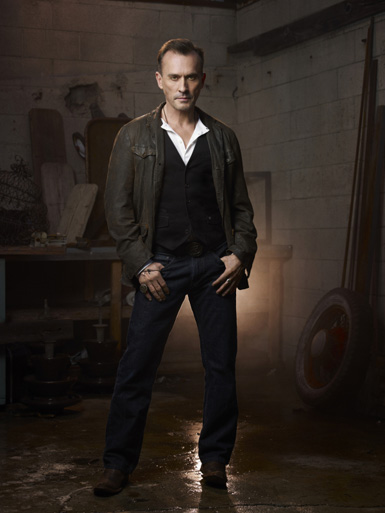 It comes as no surprise to longtime fans, but there is something magnetic and unusually compelling about Robert Knepper.  He has employed that charisma to his benefit over the years, including unforgettable roles in PRISON BREAK and STARGATE: UNIVERSE.  In an exclusive interview Robert Knepper shared the secret to his new character Billy Grimm’s cult-like success and provided a few clues that fans should be keeping a careful eye as the first season of CULT unfolds.

What is it about CULT that you think will hook viewers right away?
ROBERT:  The simple answer is that there are so many different layers of the show.  There’s the simple story of the brother trying to find his younger brother.  There’s the idea of:  Who is the real “cult”?  There’s “Cult” on the inside-show, where Billy Grimm lives; and then there’s the outside-show where if anyone gets close to finding out the truth, people start disappearing.  But by whom?  Someone who is in a cult-like organization?  Then you’ve got the other story, the little teaser of a thing where you see a card at the end that says: “Created by Stephen Rae”.  Well, who’s Stephen Rae? You start to think, “Wait a minute, I thought this show was created by Rockne S. O’Bannon.”  So there’s always these things popping up.

What do you think it is about Billy Grimm that make people want to follow him?
ROBERT:  (Laughs) His eyes and his voice.  I remember reading years ago that when John Kennedy walked into a room, everyone turned to watch. And that’s what I tried to tap into with Billy.  He doesn’t flinch.

He just commands attention that way.
ROBERT:  Effortlessly.  It felt like I was channeling Robert Mitchum for awhile.  There is something really strong about him without forcing it too much.  It’s the “this is just who I am, you will like it” attitude.

You are playing Roger and Billy, do you think Roger envies Billy’s character and wants to embody some of that magnetic charm for his own life?
ROBERT:  It’s like me, as Robert Knepper, can walk into any bar and everyone backs away because they associate me with the character T-Bag.  Viewers get an image in their head because of a character you play.  And Roger has had some success in his life, and he tries to distance himself from his character Billy Grimm, but he can’t.  The public won’t let him.  So he quickly goes to accept that this is a part of life as an actor.

Do you find it challenging to portray two different characters on the same show?
ROBERT:  Absolutely.  You find the similarities between the two characters and then you find he dissimilarities.  I have to say though that by the end of the first season I was going a little batty remembering this is Roger and this is Billy.  But, again, I’d rather be faced with that than not to have the challenge at all.

It seems like the show is ramping up and it is going to get a lot more dramatic with action going on, do either Roger or Billy get into the action, or are they going to sail right through it all?
ROBERT:  They’re like me, and I’m like a kid and saying “yeah, let’s do this!”  But then later, I’m like, “maybe I shouldn’t have done all those stunts.”

What’s the relationship between Roger and Marti like?
ROBERT:  He’s there for her.  He helps her through some stuff in dealing with how crazy this fandom-manic has gotten.

Do Roger and Marti start to buy into the fact that there is an actual cult out there trying to bring their show into the real world?
ROBERT:  NO, I think that I think we’ll delve into more later.  The first season is to establish the inside-show and follow Jeff’s story in going after his brother.  You have to remember, it’s all pretty much a secret.  They don’t want the network to know or anyone to know, as the network may be culpable with, “Are we promoting a show that is promoting violence?”  But that is all going to come to a head and explode.

To see more of the mystery of the cult behind the TV show in the mind-bending series CULT, be sure to tune for new episodes on Friday nights at 9PM on the CW.