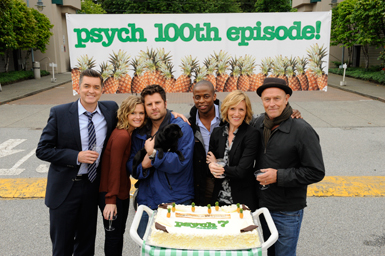 Tapping into a rich comedy vein in a fantastically hilarious homage to the film “Clue,” the USA Network series PSYCH reunites three of the stars of “Clue” for PSYCH’s 100th episode, aptly entitled “100 Clues.”  One hundred episodes of Shawn Spencer (James Roday) and Burton Guster (Dule Hill) using their psych-out abilities to aid the local Santa Barbara police department has taken fans on a merry ride.

This week’s very special episode offers one of the fun concepts from the film “Clue” by allowing fans to vote for 3-alternative endings, and votes may be cast on the Psych.USAnetwork.com website and via twitter.

During the PSYCH 100th episode celebration on set, special guest stars Christopher Lloyd, Martin Mull and Lesley Anne Warren shared how they came to be a part of this momentous episode and reflected back on the zany fun they had working on the film “Clue.”

What does it feel like to be together after so long?  Was it a weird experience for you?
MARTIN:  To be the ones that are still living?
LESLEY:  Martin and I did a movie after “Clue,” so we played husband and wife in another movie and so it’s fantastic to see him again.  But it’s so great to see Christopher.  It’s just amazing.  Really.
CHRISTOPHER:  Hadn’t seen Lesley since we wrapped “Clue.”
LESLEY:  A long time ago.
MARTIN:  And she’s changed not a whit.
LESLEY:  Yeah.
MARTIN:  It’s funny.  Some of the energy feels very akin to what it was like on “Clue,” a lot of the mob scenes, running here, running there, running here, running there, etc.  They’ve I think they’ve captured the essence of whatever it was we did that they kind of got that.  It’s been nice.

Were you fans of PSYCH? Had you see it before?
LESLEY:  I had not.
MARTIN:  No, I hadn’t.
LESLEY:  Completely new experience.

What kind of honor is it for you to have such an iconic movie being portrayed in a show like PSYCH?
LESLEY:  Oh it’s fabulous.  I mean it’s interesting, I mean, “Clue” has taken on its own life, like “Rocky Horror Show.”  I mean, I’ll go into a restaurant and some 20 year old server will come up to me and recite all these lines.  It’s really true.  I know that they do it throughout the country in different places, but there’s a movie theater in L.A. that has a “Clue” night and everybody dresses up and they do all the lines and sing.  They know the whole show. So it’s fabulous that we’re here, doing this.
MARTIN:  But it’s funny. It didn’t happen right out of the box though. I mean it was not where you go, “Oh it was a hit movie at the time.”  No, it has to take 40 years and be a cult thing.
LESLEY:  It’s true.

What was your impression coming onto this set?
LESLEY:  Well I just finished a five-year run on IN PLAIN SIGHT, another USA Network show and I was actually struck by how it’s such a different set.  The two leads, James [Roday] and Dulé [Hill], are so darling and sweet and generous and lovely.  And Maggie all of them are so open and collaborative. Not that our set wasn’t but it was a drama and it was very intense and it was very so it had a whole different energy.  So this is just really fun. Really creative and fun.
MARTIN:  Yeah, I’m impressed by how silly they are.   They seem like they have no worry ever about ever saying, “Is this too big or is this too far? “ These are not questions that enter their minds.  They’re willing, and they just go for it and it’s great.

How did you guys get back involved with this?  What was your first reaction when you heard they were going to be doing a “Clue” homage for PSYCH?
LESLEY:  Well I honestly I just got a call from my agents telling me that this was going on and asking, did I want to participate.  And then I found out that Martin and Christopher were involved and I’m like, “Yeah, this would be so much fun.  This would be great.  Definitely.”  It was that simple really.
MARTIN:  My agent just called and said, “Remember when you worked back in 1978?”  He said, “I think I have another opportunity for you.”  And I couldn’t believe it so I called the gardening service I’ve been working for and told them to sell the mower.  No, it was what Lesley said. It was the idea of knowing I was gonna be with these two [Lesley and Christopher].  You don’t say no.  In fact I’m sure Michael McKeon would be here if he had both legs operative right now.  He got hit by a car. So, we wish him well.
CHRISTOPHER:  (Laughs) I had no idea. I barely knew that it was a takeoff on “Clue.”  When I got here, I’m looking at a call sheet and discovered that you both were cast as guest-stars.  I was like blown away. I just couldn’t believe it.

Can you each share some favorite moments from working on “Clue”?
LESLEY:  It was insane on set.  I mean I really feel like we were out of control.  All of these brilliantly, hysterically funny comedic actors thrown together and doing their thing and this poor director, and he could not corral us to save his life.  And we were cracking up at each other’s stuff.  Constantly.  I mean constantly.  So I think one of my favorite moments is when we had a scene together when we were trying to get through a door and it took we milked it ‘til it was ridiculous.  But just made me laugh so much.
MARTIN:  You have to remember that we had Michael McKeon, Eileen Brennan, Madeline Kahn and Tim Curry all added to that mix. And we were all there, every day in every scene. So when you have that many people who are certifiable in one room, it just, — and she’s right, poor Jonathan, he was just kind of, not prim, but he was kind of by the letter of the book director — and then we would proceed to just go miles in another way or something like that.
LESLEY:  That was the last thing we did that we actually paid attention to any direction he gave us.  It was balls-to-the-wall after that.
MARTIN:  Yeah, it’s unfortunate it wasn’t one of those situations where there’s also a crew doing “the making of” because that would be something I would probably go out and see again tonight.

Can you talk a little bit about what your character is like in this episode of PSYCH?
LESLEY: It’s nothing like my character in “Clue.”  She’s kind of nervous and shy.  She was the number one groupie in her day and still feels a lot of pride about that.  And now she’s a single mom.  I don’t want to give away too much.  But my character in “Clue” is much more sort of sexy, angry. I had this whole other energy.  So it’s interesting to be doing this “Clue” takeoff and having a very diametrically opposed character to play in it.  I have to wrap my head around it every time.
MARTIN:  And I’m basically a drunken old fart.  So it’s kind of a reach. (Laughs) But I was Billy Lips’ road manager and I am no stranger to the bottle and virtually everything I say as written is undecipherable, or indecipherable. I’m not sure which it is but just mumbles his way through the whole thing drunk.
CHRISTOPHER: The defining thing for my character is also how different from what I feel, from what it was in the movie. What I know is that he graduated from Harvard.  That’s his defining thing.  I feel as it’s gone along, he’s a very repressed person and has been barely able to maintain his self-control in certain moments, and kind of like that.

How does filming PSYCH’s 100th episode “100 Clues” compare to filming the original film “Clue”?
LESLEY:  I think because we were there for three and a half months on this one set that was built on the Paramount lot, and as Martin said, we were all in all of the scenes together, so it had it took on its own sort of life. This, obviously, is a truncated schedule to say least in comparison.  We’re doing a week’s worth of work that we shot in three and a half months.  So there’s the pressure of time constraints and the reality of that. And trying to create as much as you can in that moment with as with the reality of serving a television series, which is ultimately different.  So it’s a very different energy, I would say.
MARTIN:  Yeah, there’s something that happens to just your brain when, like she said, that all of us were in one set for 13 weeks. It’s probably the same kind of mentality that happens when people are trapped in an elevator for eight hours and something happens to your sense of logic and your ability to communicate.  So it just blew out down on “Clue.”  But if we stayed here long enough, we could probably get that to happen here.
LESLEY:  It’s like being in therapy, in a marathon therapy session. And everybody gets very real.  All the guards are down people are different.  For me, it’s interesting.  I mean, things can happen in a moment when you’re doing the work this way on a television set.  On the other hand, you can also develop a character much more deeply and the relationships much more specifically, which brings another whole color to what you’re doing.
MARTIN:  Something else that’s kind of interesting about the “Clue” movie, at least to me, is that we never knew during the shoot.  We pretty much shot in sequence because we’re all in one outfit and we’re on one stage, so there’s no reason to do Day Five before Day One.  So we never knew, during the course of the shooting the film, who the killer was. We didn’t know if we were guilty or not.  So we didn’t know at all until we were done with the body of the film that there were going be four endings. That there were four different endings shot and, depending on which theater you went to, that was the ending you saw.  So that if you went to one theater, you’d say, “Oh, I love it.  I love it when Miss Scarlet kills the guy.” But then if someone else went to another theater, they thought it was Mr. Green.  Or whatever because the other theater had a different end. But we didn’t know any of this stuff at the time.

Do you know who the murderer is this time around?
MARTIN:  (Laughs) I don’t even know my lines.
LESLEY: I don’t think we should give it away.
MARTIN:  I don’t think so either.
LESLEY:   So we won’t say.  Be surprised.
MARTIN:  It will be equally enjoyable.

To see the iconic cast of “Clue” reprise their classic roles in an entirely new and fun way, be sure to tune in for the 100th episode of PSYCH appropriately entitled “100 Clues” on Wednesday, March 27th at 10PM on USA Network.  With three possible different endings, depending on fans online voting during the show, you are certain to never guess the ending!