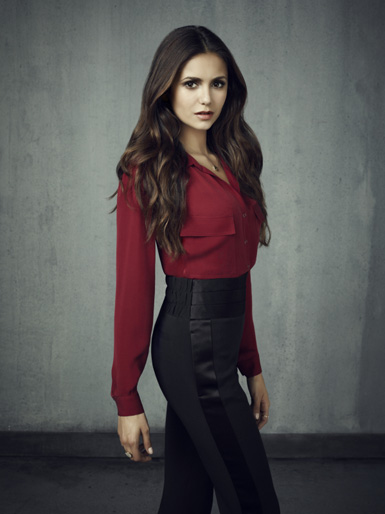 Since it first debuted 4 years ago, THE VAMPIRE DIARIES has never been shy about killing off characters.  In fact, they have taken such a no-holds-barred approach to it that major character deaths are now expected.  Most recently, the loss of Jeremy Gilbert (Steven R. McQueen) added to the long list of deaths of characters fans were attached to;  before that, there had been the death’s Alaric (Matt Davis), Jenna (Sara Canning), John (David Anders), Isobel (Mia Kirshner), Anna (Malese Jow), Lexi (Arielle Kebbel)– and to a lesser degree Grams, Vicki (Kayla Ewell), Mason (Taylor Kinney), Rose (Lauren Cohan), Kol (Nathaniel Buzolic), Finn (Casper Zafer), Esther (Alice Evans), Carol Lockwood (Susan Walters), and Bill Forbes (Jack Coleman).

What I propose here is that THE VAMPIRE DIARIES that has never been hesitant to kill before should take the ultimate risk and kill off its lead, Elena Gilbert. Now let’s be clear, I’m not advocating getting rid of the actress Nina Dobrev, who I still think exceptional in the doppelganger role of Katherine Pierce.  But, for me, the character Elena is simply done.

When Elena was first killed at the end of Season 3, everyone gasped with horror at the sheer audacity to kill the central character of the show.  But that death was short-lived as Elena soon revived due to the vampire blood in her system – albeit, revived as a vampire.  In fact this entire fourth season has revolved around the quest for a cure to return Elena to human status and banish her darker vampire nature.  But I say that is not enough.  The damage has already been done:  Elena is simply not a character worth rooting for anymore.  She is no longer the heart of the show and the show would survive just fine without her.

I can hear the outcry now.  But go with me on this.  I have been a long-time supporter of Elena — and the tug-of-war for her heart between the Salvatore brothers, Stefan (Paul Wesley) and Damon (Ian Somerhalder).  In fact, I devoted my Thursday nights for 3 years to reviewing THE VAMPIRE DIARIES because I loved the life of Elena and the ever-widening circle of friends and foes.  It was intoxicating and enthralling.  Then something happened — this season I found myself dreading Thursday nights.  I no longer cared to review the show I had devoted years of my life to;  and it took a lot of pondering and reflection until I realized, I had no one to root for.

The hero, heart and soul of the series has been stripped away.  Elena Gilbert, the vampire, was repulsive, off-putting, and downright despicable.  I had no desire to see her get anything in life; in fact, I began wishing she would disappear.  That’s right.  It boggled my mind at first.  It seemed inconceivable that the show could go on without the one character that it have revolved around for so long.  But the more I thought about it, I became convinced that Elena was the problem.  Again, to be clear, not the actress just the character.  For I still get shivers of anticipation when Katherine appears on screen as Katherine’s story is not yet over.

But Elena’s story virtually ended the day she awoke as a vampire.  Someone should have done her the honor of killing her outright.  If Damon or Stefan had truly loved her, they would have spared her the grief and horror of awakening to a state of being she never wanted.   Instead every single person in her life, from her two faithful suitors to her brother to her best friends, all worked against her wishes and allowed her to live the life she had refused time and time again.

The second Elena awoke as a vampire, her thoughts and feelings were not her own.  It took a number of episodes for anyone to realize it, but she was not only under the sway of her vampire needs, but also a sire-bond to Damon.  Unconsciously from the start, she was not the Elena we knew and loved, she was another creature/person entirely.  Credit to the writers and to Nina Dobrev for the subtle shifts in personality this season.  It was not as noticeable at first, but we all felt it.  Something was wrong with Elena.  So the fact that she was sire-bonded really came as no surprise.  She was not herself literally.

But the creature that Elena is now is not the heroine we all fell in love with.  Even before she turned off her humanity-switch, she showed tendencies of selfishness and thoughtlessness that were not true to her character.  The vampire curse had begun to tweak with her soul and infected it with her darker-side and desires.

For long-time fans, it was disheartening to watch the disintegration of such a beloved character.  It no longer mattered whether Elena ended up with Stefan or Damon.  She simply did not deserve either one of them, and watching her cozy up to either was nauseating.  This is sacrilegious to say, but it felt like we were watching Katherine in the scenes and not Elena.  That is how far off track Elena’s persona had eroded; and not for one second have we ever wanted Katherine with Stefan or Damon.  That always felt wrong, as it should.  Katherine was only out for herself and used people mercilessly;  which she proved more recently by callously killing Jeremy Gilbert (or rather leaving him to be killed by Silas) and her attempt to barter her freedom from Klaus’ (Joseph Morgan) wrath by giving him the cure.

Elena, as a vampire, had become so much like her doppelganger that those around her even commented on it.  It also made it nearly impossible to distinguish between Elena and Katherine, which was emphasized in the most recent episode “American Gothic” where Elena attempted to impersonate Katherine, and on anyone but Elijah (Daniel Gillies), that would have worked.  For Elena and Katherine no longer just look alike, being nearly biological twins as doppelgangers, but their personalities had shifted similarly under the vampire-curse influence.  It heightened their darker sides and buried their humanity.

So imagine THE VAMPIRE DIARIES without Elena Gilbert.  The entire Gilbert line has been slowly eradicated throughout the series.  It is simply time to let it die entirely with some dignity.  Let Elena rest in peace.  And then let us enjoy a world where there are endless new possibilities.  Imagine who would be worthy of the Salvatore brothers’ hearts if they were no longer shackled to the endless curse of falling in love with doppelgangers?  Would there be a chance for Stefan and Caroline (Candice Accola)?  With Tyler (Michael Trevino) and Klaus hanging in the wings, that could be spicy and interesting.  And Damon has never been left wanting in the love department.  He can virtually snap his fingers and girls come running, even without vampire compulsion.

Perhaps this is the perfect time for THE VAMPIRE DIARIES to shed some unwanted weight and free up its characters, its mythology, and its next season to center around those characters which we still care about – or even to introduce a heroine worthy of our slavish devotion again — one that we would wish with all our hearts to win the love of one or both of the Salvatores.

Elena’s time has come and gone.  Her story was always going to be a tragedy and her life cut-short one way or another.  It was her destiny as the doppelganger.  Even Katherine had fled from the doppelganger curse by embracing vampirism and then spending the next 500 years of her life fleeing Klaus’ rage.

So I advocate that it is time to let Elena die in peace and let another worthier heroine rise up.  It would rejuvenate a stale series, which has poisoned its own “heart.” It would galvanize fans’ interest and perhaps garner a ratings spike to prove that THE VAMPIRE DIARIES could be the most-talked about show on television once more.

The time has come to bury Elena Gilbert once and for all. After all, she always wanted to be a martyr – let’s honor that wish.