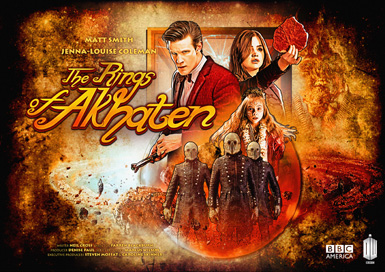 Perhaps more accurately called The Curse of Constantly Saving Clara, The Doctor has his hands full in a season-long arc akin to his version of “Groundhog Day.”  Season 7 started with “The Asylum of the Daleks” where he first met Clara Oswin, the girl trapped inside the body of a Dalek.  It was with horror and great sadness that The Doctor realized what had happened to Clara, and he knew that he could not save her. Unfortunately, so many people have come and gone in The Doctor’s life that tragedy feels like the norm. But every once in awhile, there is one person that haunts him for a while, and this season it is Clara.

In the Christmas special, “The Snowmen,” The Doctor once again ran into a very remarkable young woman named Clara Oswald.  He did not recognize her at first as he had never met her face-to-face in “Asylum of the Daleks.” But it was the voice and her unmistakable phraseology that caught his attention.  Clara had the habit of using the unique phrase: “Run, you clever boy. . . And remember” (aka:  RYCBAR) each time right before she died.

So as last week’s new episode opened in “The Bells of Saint John,” we finally saw to what degree losing Clara Oswald twice had affected The Doctor.  He had isolated himself in a monastery in order to contemplate what it could possibly mean that he had run into this “impossible” girl TWICE — only to watch her die just as many times without being able to save her.

For those who watched the DOCTOR WHO prequel for “The Bells of Saint John”, we saw that The Doctor had run into Clara a third time, when she was a young child, but he did not recognize her.  So by the time The Doctor finds Clara again in “The Bells of Saint John,” he has met her three times previously, only two which ended tragically (that we are currently aware of).

Because of Clara’s propensity to die tragic deaths suddenly it was no wonder that The Doctor went to extreme lengths to protect her upon this fourth meeting.  All the Spoonheads in the universe were not going to steal Clara away from him this time.  With sonic-screwdriver in hand and a willingness to do anything to save her, The Doctor was indeed successful this time.  A third tragedy had been averted – for now.

So who is “The Impossible Girl” – a mystery so confounding that The Doctor himself cannot fathom its answer?  That is the mystery of this season.  The explanation of her confusing monikers was readily explained as Clara Oswin was a modification of Clara’s last name of Oswald, which she transformed to Os-win (Oswald for the win) in a moment of glee.  Thereby naming herself as Clara “Oswin” Oswald, or so much more cleverly dubbed, The Impossible Girl by The Doctor.

To be trapped in various scenarios where Clara is certain to die, The Doctor is constantly stuck trying to save her and avert her natural demise in each of her incarnations.  What has sparked off this seemingly endless cycle of watching the same girl die over-and-over again?  Has The Doctor somehow inserted himself into a timeloop, or is it his destiny to find away out of the time paradox which traps Clara in various timelines forcing The Doctor to watch her die each time?

Whether by destiny or design, it is fascinating to watch and be reintroduced to Clara Oswald, each and every time.  She meets The Doctor over and over again, each time struck anew at how fascinating his life is and never daunted by the prospect of how dangerous it is.  That fearlessness and confidence is intoxicating.  Just like The Doctor, we are left wondering: who is this remarkable girl?

Clara Oswin Oswald is The Impossible Girl.  She is like a Christmas present left under the tree to discover and unwrap for she is the ultimate puzzle of life.  Why would the universe deposit the same girl into different timelines just so she could run into The Doctor and then die a horrible death?  Are we seeing clones of the same woman or literally the same woman living different lives throughout time? Or could they be descendants with perfect genes rendering her identical to ancestors?   Given that this is DOCTOR WHO, it is actually more plausible to believe that there is some kind of kink in time – a timeloop which requires The Doctor to sort out.

But if is not a timeloop and this is not a “Groundhog Day” scenario, then how did Clara end up sprinkled throughout time?  It is an impossible conundrum.  But one which we will happily contemplate and enjoy as each adventure unfolds this season.

Be sure to tune in for the next adventure of The Doctor and The Impossible Girl  in the next episode “The Rings of Akhaten,” which airs Saturday, April 6th at 8PM on BBC America (Space in Canada).