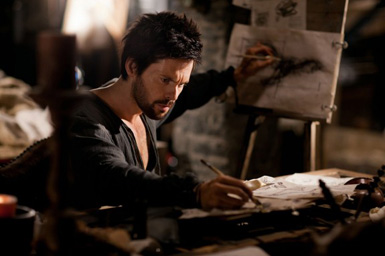 Offering a swashbuckling approach to telling the tale of Leonardo da Vinci, inventor and scientist extraordinaire as well as a visionary long before his time, the new Starz drama series DA VINCI’S DEMONS has the look and feel of a pirate-adventure tale. Da Vinci is not just a hero that romances the ladies and dashes about with eternal optimism and cheeky confidence, he is an unwilling pawn in a very nasty game of politics between the Roman church and the royal powerbrokers looking to upset the political balance in their favor. Politics, religion and science – it is the makings of a cataclysmic collision of conflicting interests. Yet that makes for rich storytelling and drama.

Marvelously cast as Leonardo Da Vinci is the enthusiastic Tom Riley (who Austenites may recognize as Mr. Wickum from the British mini-series “Lost in Austen”). Adding the decorative and deviousness to his world are the ladies of his life, Lucrezia Donati (Laura Haddock), Clarice Orsini (Lara Pulver), and Vanessa (Hera Hilmer). Each has a pivotal part to play in Da Vinci’s life as they in turns seduce and manipulate him to their own ends. Then there are many men maneuvering to use Da Vinci as a tool and weapon in their power plays, including Count Girolamo Riario (Blake Ritson), the Count’s brother Lorenzo Medici (Eliot Cowan), Pope Sixtus IV (James Faulkner) and man known only as The Turk (Alexander Siddig). Renown for his incredible genius and ability to create machines and weapons, everyone wants Da Vinci by their side and working for them – whether he knows it or not.

The plotting going on amongst all the players is intricate and no one is to be trusted. Each has their own agenda and Da Vinci is seemingly unaware of the mechanisms employed to use his skills and genius for other’s dark agendas. Instead, Da Vinci is obsessed with locating the mythical Book of Leaves. Obsessed with learning the secrets of the universe, Da Vinci placates everyone else’s political ambitions while quietly pursuing his own passions. Watching the games within games that they all play, one is never quite sure if Da Vinci is ever really allied and friends with any of them, or merely pretending to in order to disguise his true interests.

As some of the layers are peeled back, there will be a spy revealed in their midst; for this is a dangerous game of power and neither the Vatican nor Rome shall yield without striking at the heart of both sides.

As cavalier and charming as Da Vinci is, do not mistake this series as simply that. There will be scenes with open nudity, both to admire and to repulse, and stark displays of disease, dementia and body decay. After all, Da Vinci lived in the 1,400’s and life was rough and raw in those times. DA VINCI’S DEMONS is aptly named and should be seen as a cautionary note for a series that appears glamorous and glorious on the surface. Da Vinci was a mad genius, one who entertained and invented extraordinary things, and this series seeks to explore it all.

You are invited to discover this complex world of DA VINCI’S DEMONS, on Friday, April 12th at 10:00 p.m. on Starz (following the series finale of SPARTACUS: WAR OF THE DAMNED). It will then air Friday nights at 9PM on Starz.