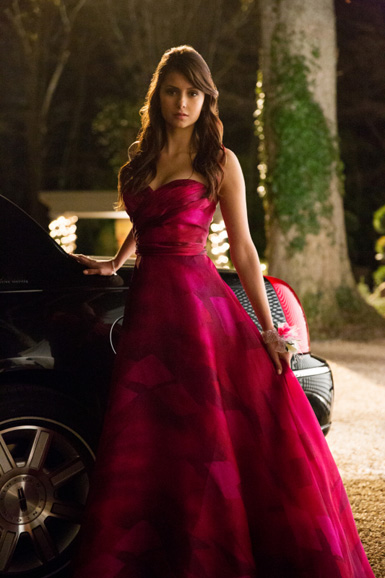 Prom would normally be the epitome of all things great during high school.  A girl attends with the boy of her dreams and wears a dress that memorializes that crowning moment for the rest of her life.  It is a night literally worth remembering.  If only Elena cared.  Even attending with two dreamy guys and wearing the best dress holds no real pleasure for her. Elena is merely going through the motions in order to achieve her own twisted goals.  So what is Elena dreaming of on prom night?  You’ll have to see it to believe it.

Fortunately, this episode is not all about Elena and not everyone thinks Elena deserves to be human again.  She had her chance and threw it away.  This episode depicts the parallel journey of Rebekah, who desperately wants to be human again and to live a normal life.  So Elijah challenges Rebekah to prove that she deserves to be human by living one entire day as a human, not using any of her vampire abilities.   But being human is a lot harder than Rebekah anticipated.  It means not being able to snap her figures and compel whatever guy she chooses as a date and having to put up with insults that she normally would never condone without breaking someone’s neck.  The once scene that truly spotlights Rebekah’s inability to really be a human again is when she asks Matt if he thinks she would make a “good human” and he replied that she has never been good in her whole existence; so he does not think she is capable of being “good.”

The agony of Rebekah’s attempt to regain her humanity and the stubborn resistance by Elena to keep from having her humanity forced back upon her has a nice mirroring effect.  But whether swayed by emotions or not, it is fascinating what eventually compels Rebekah and Elena to give up their quest.   Each will be faced with a situation that forces them to make an unhappy choice.

Then as Rebekah and Elena are coming to terms with their various states of being, there is a tricky masquerade being played on prom night.  Just who is Silas and when will he pop up next?  He can literally be anyone and that shapeshifting ability comes quite in handy when trying to manipulate everyone into the positions he wants; and Silas will not just messing with Klaus and Bonnie this time around. Everyone is fair game and figuring out who is real and who is fake is another fascinating mind-game for the episode.   The saying maybe “where is Waldo?” but for the Mystic Falls gang, it will be “who is Silas?”  It will not be as easy as you think.

So as you watch this week’s new episode of THE VAMPIRE DIARIES, pay close attention to the how each of characters behaves. Some will be acting like themselves and some won’t. Silas, Silas, wherever you are, come out and play – and play he does!

All new episodes of THE VAMPIRE DIARIES airs Thursday nights at 8:00 p.m. on the CW.  As a fun tease, here are the lyrics to The Cure’s song “Pictures of You.”  There’s a big clue in the song revealing what ultimately may give Elena her emotions back.