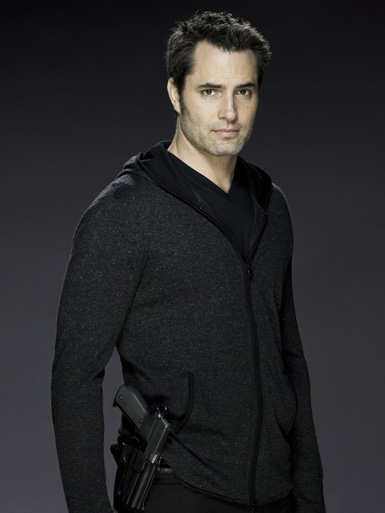 The secrets we keep mold us into ways we never imagine.  As much as the sci-fi series CONTINUUM is about time-travel and time-loops, it is also a series about secrets and trust.  Unaware that his partner has been sent back in time to apprehend a ruthless bunch of activists known as Liber8, Detective Carlos Fonnegra (Victor Webster) is never exactly sure why he trusts Kiera Cameron (Rachel Nichols) so completely.  He knows with every fiber of his being that she is lying to him and keeps secrets from him, and he would not be a cop without such finely-tuned instincts.  Portraying the conflicted Carlos is Victor Webster.  In an exclusive interview, Victor candidly talked about the trust issues between Carlos and Kiera and how that has ripple-effects throughout the upcoming second season of CONTINUUM.

How far into the second season have you filmed so far?
VICTOR:  We’re currently filming episode 9 of 13. Season 2 starts next Sunday in Canada, then May in the U.K., and I think June in the U.S.

CONTINUUM has really taken off. Were you surprised at the popularity of the show?
VICTOR:  I am and I’m not.  I remember reading the script for the show thinking, “This is going to be really great show for me.” Then seeing all the imaging work that the other actors were doing – but you never really know until the show is all put together.  It was once I saw some footage of the show all put together and then I was impressed and thought, “Wow, this is a really good show.  Once we have it out there for people to see, I’m hopeful that people really enjoy it.”  Then people started watching it and got drawn in by the way that the characters were unfolding and all of the action and sci-fi and all the visual effects.  I was really happy to see they embraced it so warmly.

Since there are so many different timelines, does the show provide you with a cheatsheet to keep it straight, or do you just kind of go for it?
VICTOR:  We’re pretty familiar with the scripts and storylines, and I don’t do anything in the future, so that part is easy for me.  But for Rachel and the writers and the other characters – we sit down and have a little talk before shooting to know exactly where we’re at and what storyline it being done at that particular time. So there’s definitely a meeting of the minds just to keep everything straight.

Can you talk a bit about where Carlos’ head is at for Season 2? From what we last saw in the season finale, he kind of had some inklings that his partner wasn’t being completely truthful with him and we couldn’t quite tell if he was going press her for that or if he was just going to keep an eye on her.
VICTOR: There’s way too many odd occurrences with Kiera for her to be telling Carlos the truth about anything, and he knows that. But the reason that Carlos accepts that is because it’s a mandate that he works with her.  He knows that she’s from a super secret agency and she’s not really allowed to give up a lot of intel. So he accepts that.  He is not happy about it, but in Season 2 you’ll see that Carlos presses Kiera a lot more for information about what’s going on. He definitely gets into it with Kiera a lot more.

Is he spying on her a little bit or is he just being watchful?
VICTOR:  (Laughs) I don’t want to spoil it.

Do you feel like their trust and bonding in their professional relationship is still growing or is that completely eroded at this point?
VICTOR:  The one thing about Kiera is that although there are some things that cannot be easily explained, she’s always there for him.  She’s always got his back, and visa versa.  She’s got him out of sticky situations before and he’s been there for her. So as far as the professional relationship goes, Kiera’s always had his back.  So he trusts her.  He just doesn’t necessarily agree with her methods, or the way she’s going about achieving her goals; but they are effective and she apparently had the ability to do that without any negative repercussions.  So Carlos buys into it.  So I think professionally they have grown very strong and there is much more of that this year – where they need each other and are there for each other.

Does Carlos have a sense there is more going on with Kieran and Alec (Erik Knudsen)?  Like when there was the farm hostage situation in the first season, Carlos should have picked up on some vibes that Kiera and Alec knew each other somehow.
VICTOR: There’s always these little things that nag at the back of Carlos’ mind that tells him that something’s not right.   That was probably one of the many.  This year that develops even more as well in figuring out what the Alec/Kiera relationship is or if there’s a relationship. We definitely get into that a bit more this year as well.

Do we see Alec interact a bit more this season?
VICTOR:  (Laughs) I probably shouldn’t answer that question either.  I’m not allowed to talk about anything specific.

What can you share about Season 2? Will the story be jumping ahead in the timeline or does it pick up right where we left everyone at the end of Season 1?
VICTOR:  We jump ahead slightly.  Not very much at all.  So it’s in the wake of what’s happened. A couple weeks.  We never got super specific. Somewhere from 10 days to two weeks.

Is there a new big bad threat that they are facing or is Liber8 still the main antagonist this next season?
VICTOR:  Liber8 is a huge antagonist.  Lots of interesting things going on with Liber8.  We see a lot more of the members of Liber8 this year.  We really get into their characters. We see what makes them tick and why they are doing what they are doing.  So we develop those characters a lot this season as well. So now you have a real sense of the antagonists and protagonists and understanding all the struggles and what they are going through.  And we see all kinds of new problems for Carlos and Kiera this year due to Liber8’s activities.

Is that going to be one of the main storylines this next season where they are all focused on Liber8 and they don’t have time to focus on anything else?
VICTOR:  We definitely jump into the minds of those characters so the audience has an understanding of why they are doing what they are doing.  Why they are putting their lives on the line to fight this fight. What is was like living in 2077 as somebody that wasn’t welcomed, the quality of their life. It created this need to fight to change things.

What about Julian (Richard Harmon)?  Where does he fit into all this in Season 2?
VICTOR:  At the end of last season they busted him with the truck full of empty barrels, so they have him in custody.  We will see what happens with Julian and how that pays off. We get into Julian’s character a lot more this season as well.  The interesting thing that the writers have done is they don’t just focus on Carlos, Kiera and Alec this season. They really spread the wealth around a lot.  They really want you to understand the struggle.

What about Kellog (Stephen Lobo)? Is he anywhere in Carlos’ world or is he just outside of it right now?
VICTOR:  (Laughs) Kellog always seems to be in Carlos’ world somehow, either directly or indirectly. So we’ll be seeing a lot more of Kellog as well.

What will Carlos think of Kellog if he starts to see more of him around?
VICTOR:  As we’ve left it so far, Kellog’s Section 6.  When we had that episode where Kiera goes robo-Kiera when her program takes over her mind and she’s told to kill Carlos, in that episode we see Kellog and Carlos interacting and Carlos under the impression that Kellog is a fellow agent from Section 6.  We do see him around a bit more and I would think Carlos would try to get answers from him.

Don’t you think Carlos would be finely-tuned to sense Kellog is not what he seems to be as well?
VICTOR:  That would just be a common theme:  Kiera doesn’t seem what she appears to be, so he’s thinking, “Are all Section 6 agents like this? Are they all fishy? What’s going on?”

At this point you’ve been inhabiting the skin of Carlos for a bit, what do you most admire about him?
VICTOR:  He doesn’t take himself too seriously.  He’s got a very self-deprecating sense of humor. I see Carlos as just a normal everyday cop. He’s a smart guy; he’s good at his job; but he’s not a super cop.  He has to overcome all the issues in front of him by using regular means that a normal cop would use.  He doesn’t have any super abilities or super suit or programming, and he’s just go to do the legwork that a normal cop would have to do.  And he’s good at it.  He’s diligent and he has a strong moral compass. He believes in right and wrong and believes in doing things always on the side of right.  So I admire that about him.

CONTINUUM seems to have an awful lot of explosions. As an actor does that ever worry you a bit?
VICTOR:  I know! I love it. Every time we get to blow stuff up, I’m right there.  I want to see it happen.  I want to take pictures. I think that stuff is incredible.  It’s the little boy inside me, who likes playing with firecrackers and things.  I don’t think that part of me is gone.  I love it when we have gun-fights and explosions and car chases.

So you never worry, like thinking, “I shouldn’t be this close to the action where things might be exploding”?
VICTOR:  No, no, no. We’re never that close to it.  We’re well away. I mean, they are almost too safe.  It’s smart. They just make it look like we’re right there in the middle of everything.  Whether it is CGI or they use tricks with the camera. We’re never in any kind of danger whatsoever.  Not on our show. I’ve been in movies before where I’ve been a little too close for comfort, but our safety standards are really high.

So when you say the show is coming back with a bang, I have visions of, “How can they top blowing up a building like they did last season in the finale?”
VICTOR:  Oh, just wait.  We went crazy.

What can you share about the first couple of episodes of Season 2 that fans can look forward to?
VICTOR:  I don’t want to say anything too specific, let’s just say things start off with a bang.  It’s like coming out of a canon for the first 4 episodes.  It’s just crazy and they throw a lot of curveballs towards the audience.

To see just how Carlos acts on his increasing suspicions of Kiera, be sure to tune in for the second season premiere of CONTINUUM on Sunday, April 21st on Showcase in Canada. (Then second season will begin airing in the United States on June 7th on Syfy.)