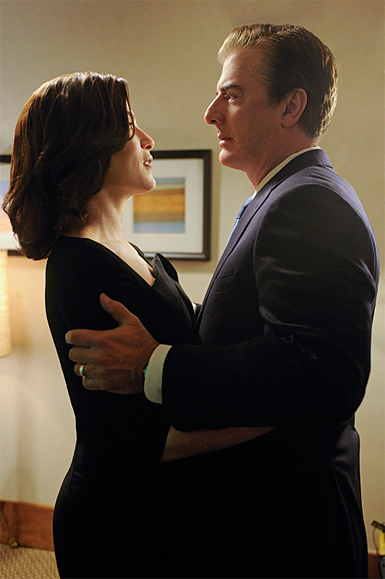 Perhaps there was no more heart-breaking moment on THE GOOD WIFE than in the 2nd season episode  “Foreign Affairs” when Alicia (Julianna Margulies) found out that her estranged husband Peter (Chris Noth) had slept with her new best friend Kalinda (Archie Panjabi).  We could just see the glass shattering around Alicia as her carefully constructed façade of control began to slip.  With expediency that one can only marvel at, Alicia had the locks changed on her apartment, packed Peter’s things, and rented an apartment for him — all within hours of learning of his latest betrayal.  Peter had betrayed her one last time and she was not going to take it anymore.

Yet throughout the 3rd and 4th seasons, we were chagrined as Peter began to woo Alicia again and as she slowly began to allow him back into her life.  Fortunately, it was not without a rebellious phase as Alicia threw caution to the wind and embarked on a torrid affair with her boss Will Gardner (Josh Charles). But then her better instincts prevailed and she called the affair to a halt before it destroyed both her professional career and her delicately-balanced personal life. So the affair was almost over just as soon as it started.

However, for the majority of this past 4th season, Alicia chose to rekindle the relationship with her husband, albeit from a distance.  She still would not allow him to move back in, and she always initiated their romantic liaisons.   So she was in control of the relationship and she assisted Peter in his campaign as far as it continued to serve her interests as well — meaning she used it to gain status in her professional life which led to a coveted partnership offer.  So just as much as Peter used Alicia to further his political career, she used him to gain respect and stature in her career as well.  It was mutually beneficial to both and provided them both with an accepted sexual partner as well – one that would not blow up their strategically-planned career paths.

But then Peter threw a curveball into the game, which Alicia quickly seized to her advantage.  He wanted to renew their wedding vows as a way of showing Alicia and everyone watching his campaign that he was a changed man.  No one was more surprised that the viewing audience. We were incredibly surprised that Alicia would accept his proposal. Yet a glimmer sparked.  Alicia must know that the timing was suspect and that Peter would only propose such a thing because it was advantageous to him.  So why would she go along with it?

It was the perfect time to spring the trap Alicia had been carefully laying for the past couple of years.  Her time for revenge had come.  How to best hurt Peter the way that he had publicly and privately hurt her?  Peter had given her the perfect opportunity – she would stand with him seemingly ready to recommit her life to him, and then utter the one word he would never expect to hear: “No.”  It would devastate him and perhaps damage his public persona in a way that he may never recover.  Payback is a bitch.

And the timing was ripe for another big power play.  The 4th year attorneys were covertly planning to leave Lockhart Gardner to start their own firm and an offer had been extended to Alicia to leave with them.  Yet why would Alicia make such a leap on the heels of finally being offered partnership?  Given the callous disregard that the partners of Lockhart Gardner operated and how ruthlessly they used Alicia and her connections to get exactly what they wanted,  regardless of how it may damage her relationships with her clients or her reputation, Alicia was not feeling very happy with her partners.  In addition, they would not look favorably upon Alicia’s well-timed revenge stroke against Peter. They would fear the back-lash on their firm.  So the timing is perfect for Alicia to leave Lockhart Gardner, reclaiming her self-respect and giving back as good as she has endured under the Lockhart Gardiner regime.

The crowning moment would be if Alicia were to tell Will: “I quit” and in the same breath ask him to marry her.  Who knows if Alicia would actually have the guts to go so far as to quit and then propose to Will, but the timing is perfect.  Dating the boss was frowned upon, but she would not be so constrained once she left Lockhart Gardner.  It would also be the final payback for her soon-to-be ex-husband Peter who always suspected that Alicia’s heart belonged to another.

The two-pronged revenge plan would be executed flawlessly.  This is assuming that Alicia is strong enough to go through with it.  But if anything we have seen over the past 4 years is that Alicia’s core strength.  She is not a woman to be trifled with and she will bide her time to strike back. No one ever sees it coming and she makes them bleed in ways they never anticipated.  The saying “hell hath no fury like a woman scored” is more than apt.  The show is called THE GOOD WIFE after all.  It was always a play on the words as Alicia was only a “good wife” so long as it suited her.  Peter’s infidelities and public humiliation of his wife were not going to go unpunished.  He may have served his time for his professional transgressions, but Alicia certainly had not forgiven or forgotten to how deeply he had hurt and humiliated her.  She was just more patient and had waited for the perfect opportunity to enact her revenge.

This is all wild speculation, but it certainly fits the woman we know as Alicia Florrick.  She has been the “good wife” and the “good employee” for too long.  It is time for her to reclaim her life, her pride and her dignity.  We will be anxiously watching this week’s episode “What’s In the Box” with breathless anticipation.  Will Alicia’s perfect trap be sprung at last?  We are praying that it is.  What a glorious revenge that would be.

To see what Alicia ultimately does, be sure to tune in for the 4th season finale of THE GOOD WIFE on Sunday, April 28th at 9PM on CBS.  The clock is ticking down on Peter’s fate.