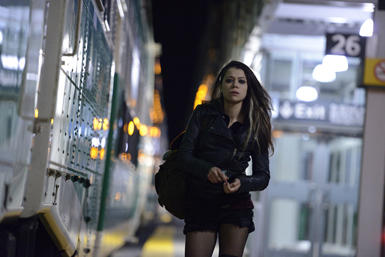 The new British sci-fi series ORPHAN BLACK does not hesitate to throw in a curve ball every chance it gets. After discovering last week in the episode “Conditions of Existence” that Beth’s boyfriend Paul (Dylan Bruce) was actually a plant assigned to monitor her every move, Sarah (Tatiana Maslany) decided to turn the tables on him to find out what Paul was really up to. After planting a bug in his office, Sarah’s worst suspicions were confirmed. Paul was spying for the enemy. Then Paul sensing something was really off with faux-Beth, followed Sarah and snapped a picture of her with her daughter Kira (Skyler Wexler), which led to a very tense showdown back at Beth’s apartment. Guns drawn, Sarah and Paul had their first honest conversation. Unfortunately, just as they were letting their facades slip, the episode ended with Sarah asking Paul, “Just tell me why” and his cryptic response, “They don’t tell us why.”

So Cosima’s guess that Paul is merely a “double-blind” appears to be true. Paul has been assigned to monitor Beth (now impersonated by Sarah) without being told what is really going on. Fortunately, this week’s episode entitled “Variations Under Domestication” picks-up right where things left off: Paul and Sarah trying to pry information out of each other, but each distrustful of the other.

Now that the clones have confirmation that Paul is a monitor that forces Allison and Cosima to take a hard look at the people in their lives to see if they can spot who may be monitoring them; and those that are closest to them are immediately suspect, prompting Allison to take drastic measures to ascertain whether her seemingly devoted husband Donnie (Kristian Bruun) is indeed spying on her. But across the pond, Cosima takes a more open-minded approach after meeting Delphine (Evelyne Brouchu), the charming foreign exchange student is suddenly entered her life.

As for Sarah, she cannot wait to ditch Paul and never see him ever again. But that is the thing about monitors, they are really good at their job. They may not know why they have been asked to observe the clones or the fact that they are clones, but surveillance is definitely in their wheel-house of expertise.

However, whoever is really spying on the clones did not expect the wrinkle of Sarah. Sarah is the anomaly in their little science project. Where she came from, the fact that she was able to integrated herself amongst the clones and assume Beth’s identity so easily, and that she can bear children when none of the other clones could makes Sarah “special.” Is she the original or just another copy? Just who is Sarah and how fast should she be running to get away from the dual power-plays closing their net around her?

So this week’s “Variations Under Domestication” takes us into the worlds of Allison and Cosima. Allison still convinced that Donnie is hiding something big, flips out and kidnaps her husband to interrogate him. She then forces Sarah to help out since Allison had forgotten about a neighborhood block party that she was hosting and she cannot simultaneously interrogate Donnie and be the perfect hostess. Not sure she can handle all this drama on her own, Sarah drags Felix (Jordan Garvaris) along with her so he can help wrangle the situation before it spins out of control. But everyone had forgotten about Vic (Michael Mando) and the enraged (and perhaps deranged) Paul. With Beth and Sarah’s ex’s circling closer and closer, things reach a boiling point — and who is to say what would happen if Vic and Paul were to meet face-to-face?

Just to turn up the heat, two more familiar faces also add to the already crowded chessboard: Eric Johnson (ROOKIE BLUE, SMALLVILLE) and Matt Frewer (EUREKA). Is the super-friendly neighbor just being neighborly and is the Neolution scientist Dr. Aldous Leekie all he appears to be as well? Just who has ulterior motives becomes a pressing question that the clones must answer. And just what effect is the big “C” word going to have once Allison, Cosima and Sarah’s secret gets out?

To see how explosive the situation gets at Allison’s house and whose suspicions are proved correct, be sure to tune in for an all new episode of ORPHAN BLACK on Saturday, May 4th at 9PM on BBC America (Space in Canada). Are all those kisses truly free or do some come at a price?