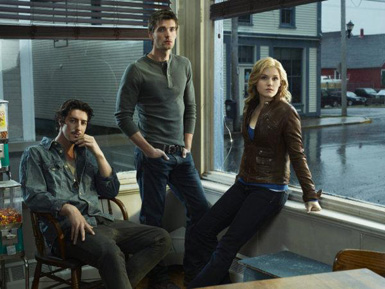 PRESS RELEASE: Startling new mysteries and secrets are in the works as Syfy’s hit series HAVEN goes into production today, May 8, on an all-new 13 episode Season 4 in Halifax, Nova Scotia.

Season 4 of HAVEN picks up six months after the devastating events of the Season 3 cliffhanger in which the town was pummeled by a violent meteor storm.  Audrey and Duke (Eric Balfour) vanished into thin air leaving an injured Nathan (Lucas Bryant) marooned in HAVEN.

Ferguson recently starred as the lovable Sherriff Jack Carter on the long-running hit Syfy series Eureka. Ferguson was also a producer on the series and directed several episodes. Ferguson’s many feature film credits include Because I Said So, Rowing Through and The Opposite of Sex. He has also starred in a number of movies for television and was a regular on the NBC remake of the hit British comedy series Coupling and the sitcom Then Came You. His many guest-starring roles include CSI, Malcolm in the Middle, Crossing Jordan and Becker.

From leading independent studio Entertainment One (eOne), HAVEN is co-commissioned by Shaw Media in Canada and globally via Universal Networks International (UNI).

HAVEN is produced by Entertainment One and Big Motion Pictures in association with Piller/Segan/Shepherd and airs on Syfy in the US, Showcase in Canada and internationally on UNI’s multiple Syfy Universal channels. Entertainment One controls the worldwide distribution rights to the one-hour series and concluded a deal with Germany’s Tele München Group (TMG) for the television rights in Continental Europe.