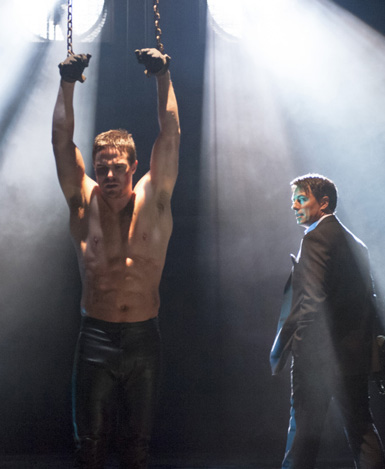 After one hell of a wild ride this first season, ARROW is not about to hit the brakes in its final hour – particularly when the first season finale is racing towards a major explosion, one of the earthquake kind and another involving hidden secrets.  In an exclusive interview, executive producer Andrew Kreisberg previewed what our heroes will be faced with in the finale, whether there is hope for the budding romances, and whether death will come a calling.

After witnessing the Laurel/Oliver tryst will Tommy’s broken heart propel him down a much darker path for the 2nd season?
ANDREW:  Tommy’s broken heart will put people to a very unexpected place. There have been the fans waiting for Tommy to turn to the darkside and then there are fans that are hoping he won’t.  I think in the finale, the way things lay out, people are going to be both surprised and, we hope, gratified at the path that Tommy takes.

So Tommy could be taking a path of his own choosing and he may not be choosing the light path or the dark path yet?
ANDREW:  Everyone in the finale is faced with a choice and I think Tommy’s choice is one of the more interesting that we have come up with.

Oliver is of course going to be keeping this big secret from Laurel as he’s probably not going to be telling her about his secret identity any time soon.  How long can their romance last in the face of that challenge?
ANDREW:  (Laughs) I don’t know. They got away with it for a pretty long time on SMALLVILLE.  I think Season 1 has proven to the audience that we’re interested in defying expectations. So in Season 2 some people may find out Oliver’s secret and it may not be who people are expecting; but at the heart of the series is the Oliver/Laurel romance. So if her finding out sooner rather than later is the most exciting and dramatic way to tell the story, then that’s something we’ll pursue.  But if her being none the wiser serves our purposes, then that’s what we’ll stick with.

So you’re not giving any hope for the Oliver/Felicity fans who are waiting on that romantic opportunity?
ANDREW:  I certainly think that for the Olicity shippers there’s a nice moment for them in the finale.  We never say “never” on this show.  When Greg, Marc and I created ARROW, Felicity wasn’t a part of the pilot. It was sort of a one-off character and we had some fun with the writing and Emily filled in the rest; and now none of us can imagine the show without her.  So where that relationship goes is something that is constantly surprising us.  It’s definitely something we’ll be exploring in the future.

What about Roy and Thea? We saw their painful breakup in the last episode. Is there going to be any hope for them or is Roy going to be determinedly following his own path?
ANDREW: The Roy/Thea relationship is something we’re really invested in and it’s something we’re looking forward to playing with moving forward.  They’re crazy kids. They say things they didn’t mean.  They have some great scenes in the finale that we’re really excited about.

One of things we’ve noticed is there are a lot of raging hormones on the show and you are not afraid to go there. What would you say is the next coupling that people should keep an eye out for?
ANDREW:  Good question.  I don’t think there’s any new couplings in the finale that are going to surprise people, but we have some ideas for Season 2 that we think will be some jaw-droppers.

And what about Walter?  It looked like he might be gone for good. Is Colin Salmon still with the series?
ANDREW:  We had Colin booked for 2 more episodes this season, and as you can see, Walter did not die.  He’s still out there in the world.  We love working with Colin and there’s always the possibility he’ll be back for more in the future.

That would be awesome! Every time he’s on screen, I just want to hug him.  There’s something warm about him.  You just want to be a part of his world.
ANDREW:  (Laughs) I could just listen to his voice all day.  He could read the phone book to me and I’d happily listen.

The other big shocker was the hood coming off and Malcolm Merlyn discovering the identity of Oliver as the Hood? How does that bode for Malcolm?
ANDREW:  It’s all personal now.  It’s one of the things we’re proudest – how we designed this season and that we hit upon Malcolm as the ultimate villain. It’s Shakespearean since he killed Oliver’s father. There’s that vendetta to settle.  But they have all been family friends for so long.  I think Malcolm’s reaction at the end was the most telling. He wasn’t necessarily happy to have beaten the Hood because when he discovers its Oliver, his first reaction is “oh no,” because now he knows he may have to kill his son’s best friend and it’s already broken his heart to have to kill Robert. He doesn’t want to cause Moira or the Queen family any more pain – but, as always, Malcolm’s pain comes first and that could have dire consequences both for the city and the Queen family in the finale.

Rumor is that there may be a big death in the finale. Is that going to be happening? Are we going to have hold our breath?
ANDREW:  (Laughs) You don’t really want to know, do you?  My wife watched the last episode and she said, “I haven’t felt like this since we watched ‘24’ together.”  So that made me really proud.  I think people should tune in for the finale.  It’s definitely a game-changer and I think people are going to be shocked by the outcome—and that’s as much as Warner Bros., DC, and my own conscience let me say.

That would be just the best scene ever!
ANDREW:  (Laughs) I’d rather see them on DOCTOR WHO together.  Who wants to see them as Malcolm and Dinah on ARROW when we can see River and Jack?

Getting back to ARROW, what part is Diggle going to play in the finale?
ANDREW:  It’s a real nice culmination of Oliver and Diggle’s friendship from over the course of the season. When we started they were wary of each other and very distrustful and they have had several falling outs over the course of the season. But it’s really nice to see them come together as friends and partners in the finale.  The character of Diggle is something we’re so proud of because he’s not from the comics and he’s really our own invention.  He’s become a fan favorite and now you almost can’t imagine the Green Arrow without his trusted friend and bodyguard, John Diggle.  I think that important status in Oliver Queen’s life really is cemented in the finale.

To see whether the ARROW producers did dare kill off any of our fan favorite characters or left their fates hanging in the finale, be sure to tune in Wednesday, May 15th at 8PM on the CW (7PM on CTV in Canada).  The Undertaking is revealed and heroes are unmasked.