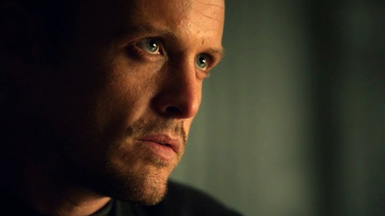 What would any great drama be without a great villain to give our heroes someone to fight against?  In REVOLUTION, Col. Sebastian Monroe (David Lyons) holds the dubious distinction of being the big bad villain.  He not only abducts children, but who will ruthlessly kill anyone who gets in his way from absolute power – both literally and figuratively.  Yet behind the mask of this villain is the heart of a charming young actor, David Lyons, who at the WB Mondo International Press Tour, provided his insight into the tricky relationship between his character Monroe and Miles Matheson (Billy Burke).

How do you identify with your character Monroe, and what’s the biggest differences?
DAVID:  There’s a lot of differences in the sense that he’s a megalomaniacal leader of a not?so?free world.

And you’re not like that?
DAVID:  I tend not to be.  But I think that at the heart of his character is deep?set anxiety and a fear and a yearning for family.  So, by that, there is a really distorted concept of love.  I have a lot of love, but mine’s not as distorted.  So I guess the similarities are – well, we start to explore that actually more as we go on.  I think in episode ten, it starts to really ?? I don’t know if you’ve seen up to that point —  but that’s when you start to realize where he’s coming from.  You might not agree with it.  I’m not sure that I do.

Is it fun to play the bad guy?  You’ve played so many really nice guys.
DAVID:  Yeah, I find it really interesting to play.  If you’re playing darkness to play the light within the darkness and vice versa, if you’re playing light to find the edge and the texture.  And so I was saying before that I don’t think anyone in terms of their action sets out to be evil, and that’s kind of where I’ve been trying to play him from, is a point where he’s misguided, but the decisions that he makes and the realizations that he comes to just come from a place which is truth, but consequences of which are so evil.

Does he realize that all these attitudes come from fear, actually, or loneliness?
DAVID:  I think that what’s interesting about him is that he’s found himself ?? and I used this analogy before — he’s riding the tiger, and it’s this beast that is stirring beneath him and he’s scared.  He’s got to hold on for dear life.  Otherwise, if he falls off, he’s going to get eaten.  Everyone around him wants what he’s got and he feels it.  And so there is true anxiety and true paranoia which ekes into his dealings with the world.  There’s no one that he truly trusts.  We haven’t found it yet.  We haven’t found that character.  And so it’s been interesting to play, because you want to keep your cards close to your chest because all of those characters that are around you, all those relationships ?? you don’t know who’s got the knife out, who’s going to be the Brutus, because he’s Caesar in this environment.

Turning briefly back to the show, as far as, the psyche of Monroe, he’s offered the olive branch back to Miles and he seems to really want his friend back.  It’s lonely at the top.  But now that Miles has rejected him, tried to kill him for a second time, is that going to shatter him somewhere deep inside?
DAVID:  Yeah.  That has kind of really torn him apart.  That was the last vestige of hope for him, was that his brother would come back and they would be once more brothers in arms.  Now, the depth to which he spirals, we haven’t explored yet.  But inside his head and heart, it’s a mess.  So given the amount of power that he wields, given the environment that he’s in, it’s doesn’t bode well for him or for Monroe.

Is there any hope of redemption for him whatsoever?
DAVID:  I always hope that there’s redemption, and I don’t know.  I think Eric Kripke is really good at turning things on its head and kind of figuring out where the emotional core of the character is and where they should go and where is most interesting to go.  And I think maybe there is room for redemption.  I think that there was a 15?year gap that we don’t know about, and we’ve seen aspects of it.  And he’s lost his family, and he’s become brothers with his best friend.  So there is a lot of love that he has and has lost.  And whether or not that can be stitched back up, we’ll see.

How intense is it to play this character for you?
DAVID:  Well, certainly episode ten was quite intense for me.  With a character like Monroe, given the characters that he’s around and given the anxiety that he feels in terms of their quest for power, his power, he doesn’t show a lot of the stuff that he feels, which means that you don’t have to dredge as an actor.  But when he sees Miles, when he sees people that he knows, when we glimpse his backstory, that’s when that pain and that anxiety starts to really surface and that’s hard, much harder to play, but also really enjoyable, really rewarding.

What’s surprised you most about the character?
DAVID:  I think just the duplicity of him.  Who he was 15 years ago and who he is now is so vast, that difference, I think.  And that’s really enjoyable.  I love doing the backstory stuff, because you can imbue a character with so much within 15 years, because he’s changed so much.  So that’s kind of what surprised me, is when we get a glimpse of him in a better time.

What did it feel like when you came onto this show?  Did you know right from the start, or have you been excited about it?
DAVID: I don’t know what this special ingredient is to a hit show because there are some which you see, and some I’ve seen and I love, and they don’t go anywhere, and other which — I mean, that’s the magic, yeah.  And I can’t put my fingers on it.  But it’s lovely to know that people are watching it.  But I didn’t know if it was going to be a hit or not. I think the premise was great.  I think the guys that are helming it are A?grade.  And that’s all you can really go with, is the pilot script and the people that are involved.

Because a lot of people are watching shows, in particular these kind of shows, later, when they get the DVD set and watch the extras and all the rest of it.  Is that how you watch TV too?  And what do you think of the idea that people will be able to ?? people who never watch the first season of your show will be able to buy it and start over between seasons and, you know?
DAVID:  Well, I think with this, in this dramatic landscape that they have, it’s really important that they go from the start.  Because there are procedural shows which you can turn on any time you want and you kind of know what’s going on.  Same characters doing different cases every week.   With this one, it’s a massive journey, not only physically but also emotionally.  And so I think DVDs are awesome for that.  Because, I mean, I was a massive fan of “24,” and I would never watch it on TV.  You always wait till you’ve got 24 hours just ready to go.  Smash that out, yet you wouldn’t sleep for two days, because there’s so much stress running through your body every time you finish an episode.  And I think that this show has that quality, where you kind of get to the end and you’re like, ugh, they’ve just left me hanging.  I need to go and figure out what happens next.  So I think it will do well, and it would behoove people to watch DVDs in that respect.

To see more of  the growing tension between Monroe and his former friend and ally-turned-traitor Miles, be sure to tune in for all new episodes Monday nights at 10PM on NBC.