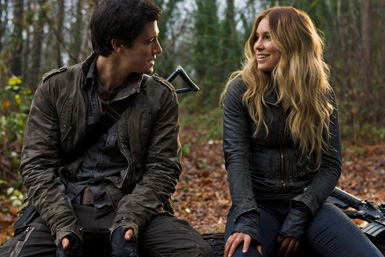 The moment that alien bug crawled into Hal’s ear at the end of the second season of FALLING SKIES, we knew that was going to be a big problem.  Starting off seven months later, the third season shows how Hal has been adversely-affected by that blasted bug.  While attending WonderCon, stars Drew Roy and Sarah Carter provided a few teasers about Hal’s ongoing problems as a result his alien parasite infection.

It’s our understanding that Hal (Drew Roy) has a remarkably twisted journey this season.
DREW:  They took care of me this season. Gave me something fun to play.  Up until this season, most of what Hal does involves Maggie (Sarah Carter) and that continues, but in a whole new way.  I feel like we really got to see the ins and outs of their relationship or Hal’s pursuit of a relationship and her shooting it down last season.  So in this new season, we’ve really come along and Hal and Maggie are more like a married couple.  They live with each other. They have their own room.  But because of everything going on with Hal with the bug going in his ear, he has some issues and some troubles.  He needs some help and Hal’s not the kind of guy to tell anybody that.  But because of what Hal and Maggie have, she is really the only one that is seeing the pain of what he is going through with these difficulties because on the outside he tries to put up this front of “Hey, I’ve got everything under control. It might look like it’s not together, but everything’s fine.”  He’ll smile through it, but Maggie is the one who goes home with him and sees these struggles.
SARAH:  And he’s a bit snarky.

Does everyone know at this point that Hal has been infected?
DREW:  Nobody knows.  Maggie is only privy to it because of her intuition.

How quickly does Maggie figure it out?
SARAH:  Off the top, there’s curiosity as to why Hal is having these extreme mood swings.  He’s not treating Maggie as differently.  She finds it sexy at points.  It was really fun to play with that. It wasn’t so much a marriage for her initially.  It’s interesting the circumstances of how Drew playing Hal would interpret it versus me playing Maggie.

So there’s a bit more friction in their relationship?
SARAH:  There is friction.
DREW:  When has there not been?!
SARAH:  Yeah, it’s not easy for Hal and Maggie, but there’s deep loyalty there and ultimately that prevails.

Does Maggie ultimately start to question Hal’s ability to go out into the field and protect the rebels?
SARAH:  That’s where Maggie seems to empower her men.  She knows Hal’s spirit will die if he isn’t out on the field. So he’s never emasculated by Maggie in anyway.

Does Hal have any misgivings about his ability to competently go out into the field?
DREW:  Yeah, in the same way we saw Tom (Noah Wyle) in the second season, knowing something’s off and wondering how much he can trust himself.  Hal’s going through the same things.  But with Tom, he was infected by Red Eye.  So that’s someone who put the bug in him for good.  Where this time it is looking like Hal might have this coming from a not so good place.  So he is having those feelings, but even more extremely.  It is even showing itself in a more physical way, than just the psychological/mental way.

Does Hal seek out Ben’s (Connor Jessup) help with those issues?
DREW:  The interesting thing about this season was that we’re all so caught up on their own stories that there’s not a whole lot of interaction between us, which is how a lot of us end up going down darker paths and sliding off the deep-ends.  It’s because Tom is the President, so he has many other responsibilities.  Hal has already proven that he is someone who can take care of himself, so he doesn’t need to waste time with Hal.  Therefore, Hal sort of drifts off into this darker place.  Maggie is the one who gets to see that.  With Ben, you’d think that would be somewhere they could have gone.  While those two characters have come a long way in terms of getting closer with each other, but at the same time, I think Hal has a little bit of pride thing going on as well.  To ask a younger brother about this kind of stuff maybe he’s uncomfortable about it – on top of the fact that Hal knows that something’s wrong.
SARAH:  Ben and Matt (Maxim Knight) have a sweet relationship though this season.  I think Ben takes on the role of the older brother since Hal is so wrapped up on his own conflict.  So Ben steps up this season and takes Matt under his wing.  Actually Maggie does that too.  There’s a lot of coming together for the sake of Matt. I think that’s what brings the family aspect of the show back in sight.
DREW:  We’re going to see a little bit more of that rebel side that Hal comes from.  We’re going to see Matt a little bit more spunky this year.

How is Hal and Matt’s relationship this season?
DREW:  Again, Hal’s so caught up in his own problems.  I guess later we see a little something.  But for the bulk of the season, Hal is so focused on just keeping everything contained and not letting anything slip because he knows it is for the betterment of the entire Charleston area.  Hal’s potentially dangerous, but does he want to come clean on that?  And “coming clean,” what does that mean? There’s a lot of people not happy about that kind of stuff.  There’s Ben who has spikes; Tom has had the eye-bug.  They’re a whole family of half aliens, so does Hal really want to come out and say, “Hey, you know what? I’m feeling a little fishy too.”

Can you comment about the Volm and how it felt to bring a new species onto the show and having another unknown element again?
SARAH:  Doug Jones is so much fun.  I liked it.  It was “E.T.”, which is why I love Spielberg.  So it was so exciting to have such a fantastic character.  They did a great job with his look. I think it’s an awesome element.
DREW:  And with all the elements going on in Charleston of information somehow being leaked, you have your eye on several different characters as to how this happening and with this new species coming in, what are their motives?  Why are they here? Are they good? Are they bad?   They seem good.  They are definitely helping.  In the very beginning we see some of their technology at work, but are they really that transparent with us or what’s going on with them?  So having that aspect of a new alien really causes some potential drama.

To see what progress Hal is making in fighting off the alien intruder in his own body and the repercussions it has on all those around him, be sure to tune in for the 2-hour third season premiere of FALLING SKIES on Sunday, June 9th at 9PM on TNT.