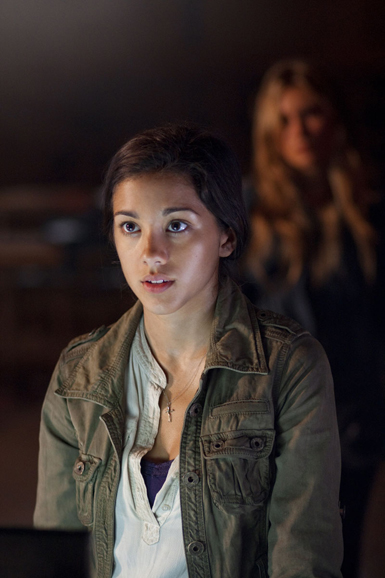 A full-fledged doctor in charge of the care and well-being of the 2nd Mass and the other human survivors, Lourdes (Seychelle Gabriel) finds herself in midst of the action in the third season of FALLING SKIES. In a press interview at WonderCon, star Seychelle Gabriel talked about the new challenges ahead for her character and the remaining survivors as a new aliens lands in their midst.

So what’s Lourdes dealing with in Season 3?
SEYCHELLE: We come back 7 months after where the show left off in Season 2, and Lourdes was left in a really dark place. I think within that time she’s dealt with [Jamil’s death] and come to her own type of peace with it. So when we come back, Lourdes is kind of rock solid in the medical arena in Charleston. Throughout the season she becomes a doctor and more helpful; more so than Anne because Anne’s become a mother. So it’s kind of like Lourdes has grown into herself and taken all of her hardships and channeled it into this new life.

Does Lourdes have an inkling there might be something going on with Hal (Drew Roy) because he’s kind of gone through a personality change?
SEYCHELLE: There might be. What’s cool about being in the infirmary is that while I don’t get to go on all the missions and do all those crazy action scenes, everyone comes through the hospital at some point. So I get to work with almost every character and get to touch on their progressions. It’s actually really nice because Hal and Lourdes haven’t really connected since the very beginning of the first season. So because of the things that are going on with him and things that are going on with Lourdes as well, they finally have peace and quiet to kind of see each other again.

Does Lourdes encounter any problems being such a young doctor where people don’t respect her or are reluctant to have her treat them?
SEYCHELLE: I think in a post-apocalyptic world age is irrelevant. I mean, we’ve got kids holding guns. So they know that we’ve been on the road for however many months and years and if you’ve gotten that experience on your hands, then you’ve got that degree of life experience. I think what’s cool is the 2nd Mass has such great trust within their group that I think they trust so much in Lourdes that Charleston just kind of embraced that. It’s kind of cool.

What did you think was really cool in this new capacity?
SEYCHELLE: (Laughs) I got to say cool things like, “You can’t put weight on that ankle for a couple weeks.” No, I got to work on some aliens and some alien flesh and tissue. Like alien experiments that haven’t been introduced until this season. It’s pretty neat. It’s like a whole new frontier.

Are they tapping into Lourdes’ experience to try to create some biological weapons to fight back with?
SEYCHELLE: There are biological enhanced things. I don’t know if it is so much weapons, but definitely to enhance people.

Like gene-splicing?
SEYCHELLE: Yeah. It’s cool ‘cause you know how the Espheni have the harness that injects that morphine type stuff? Like the Volm kind of have stuff like that too.

To see what kinds of handy medical devices and other weaponry the Volm bring and how it effects the daily lives of the 2nd Mass, be sure to tune in for 2-hour third season premiere of FALLING SKIES on Sunday, June 9th at 9PM on TNT.