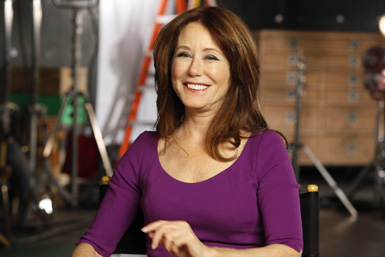 Captain Sharon Raydor (Mary McDonnell)  has always been a bit of an enigma on the TNT drama series MAJOR CRIMES.  But as she took the orphaned Rusty (Graham Patrick Martin) under wing, we began to see a softer-side of the by-the-book police captain.  Looking to peel back yet another layer on her personal life, the second season introduces her estranged husband, portrayed by Tom Berenger.  In a recent exclusive interview, star Mary McDonnell provided some insight as to what Sharon Raydor’s husband is like and how that reappearance shakes up her professional and person life in MAJOR CRIMES.

What can you tease about what fans can be expecting out of the second season of MAJOR CRIMES?
MARY:  What I can tease in terms of really new elements is the new D.A. that comes in to help out with the Philip Stroh (Billy Burke) case, which as we know Rusty is a material witness and that’s kind of how this beloved adoptive son situation came about. So the new D.A. presents so much potential and so much dilemma simultaneously for many of us in different ways.  There’s some very exciting issues that come up out of that and very human things that grow out of her presence — and Sharon Raydor is once again forced to try to understand her choices between what is right and what is right.  It’s always her dilemma.  It’s a very sophisticated line that she walks ‘cause she has a very strong moral and ethical code and she can see multiple choices.  She understands a lot this season about what has to happen, and she also understands another level that has to happen, and the fact she has to be able to choose between two right things is a very interesting dilemma.  I think that’s fun to watch.  And I think fans will be very excited about the new Tom Berenger visitation.  It’s very exciting.  He’s fantastic.  Their marriage [Sharon and Jackson’s] – I wouldn’t call it an odd marriage, but I’d call it a very understandable, interesting marriage with a lot of issues. Tom and I have worked together before and we have a lot of just innate history and chemistry, so playing it has been just a blast.  I think that’s going to be just so much fun.  Also because he comes into the home.  So it’s Sharon, it’s Rusty and it’s Jackson.  He gets to interact and sort of shake all of us in different ways.  That is so exciting and he is such a terrific actor. It’s going to be wonderful for the fans.

Since Tom Berenger’s character is an attorney, will he be involved with Philip Stroh’s prosecution or defense?
MARY:  No.  Right now he is an attorney out of work and the story he introduces, he fills in the backstory into Sharon’s past life about where their family may or may not have gone awry and where he may or may not have gone awry in his career.  But he is an attorney and he was a very good one.  He’s brought his presence in Sharon’s history right smack in the center of the show.  So that’s kind of fabulous.

Sounds like Sharon is going to have a lot going on the homefront this season between Rusty and Jackson.
MARY:  She certainly does!  Now all she needs is a male dog and she’ll be surrounded by a lot of boys.  (Laughs) It’s great actually.  It really is wonderful to watch.  I’ve learned a lot about Sharon and her life and her nature.  I’ve learned so much about her through having a husband around.  By the way, he’s not an ex, they have been literally separated for decades.  That adds an interesting element about it.  It is intriguing and raises many different questions.  I think Rusty goes, “What is it about you two? What happened?”  And it’s hard to explain.  So it’s one of those really complicated, wonderful, troubled and exciting relationships.  That’s how I would describe it.

Does Rusty take to Jackson, or does he just want to keep away from that volatile situation?
MARY:  I’m not going to spoil anything – you’ll see!

What about the Major Crimes department?  Last season it seemed they had a few kinds to work out, but by the end of the season they were all working together pretty smoothly. Does that continue this season?
MARY:  They do work pretty smoothly.  As a matter of fact, what I love about what we have done so far this season is some of the kinks have been worked out.  They are finding a way to work together really well to get the job done.  I’m not sure all the personal kinks have been all ironed out, but in terms of a systematic approach to solving crimes and using everyone to their fullest potential, I think they are finding their way.  I think it speaks so much to what we can do well as adults in our culture, in that if there is a reformation and power struggle and if you lean into it opposed to backing away from it or defend against it – if you can all lean into as adults there can actually be a new form that functions better than the old.  But you have to give up your self-perceptions.  And I think what is fascinating is that every single character in the squad, they are so good at what they do and they are such good cops, ultimately the goal and what is exciting thing is:   How do they do this now?  How do they bust these criminals?  I like watching what is happening between all the characters. And I like finding out how Sharon Raydor runs things because I think we’re seeing in the culture an example of how the feminine-mother archetype in the center of power and they run things in a more inclusive way than another archetype might have.  She is a great manager and she looks at these people as they are there to give their very best and she looks to draw that out.  I think that’s what we’re seeing in the culture right now with women.  Women of a certain age are stepping into positions of extraordinary power and using it – as opposed to just mocking up the masculine archetype and doing it the way the guys did – we are seeing more and more, mature women bringing what is classically feminine energy and inclusiveness into management. It is in my opinion a very successful way of moving forward.  Somehow this show is a microcosm of that.  At least that’s how I’m seeing it.

Are we going to be seeing any more power struggles internally at Major Crimes or has that been resolved?
MARY: (Laughs) Of course you’ll see some!

Besides Philip Stroh does this season offer a big bad nemesis for the department to pursue?
MARY:  There are some things that happen this season that I can’t really articulate. But there are threats from within and without.  That’s all I say.

To see how the introduction of Jackson Raydor tilts Sharon’s world on end, be sure to tune in the second season premiere of MAJOR CRIMES on Monday, June 10th at 9PM on TNT.