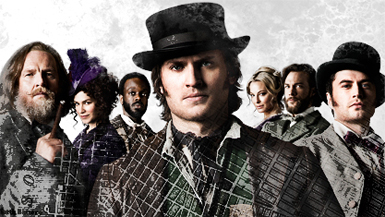 The BBC America historical drama COPPER returns for its second season full of angst, political plots, and forbidden trysts.  It offers a world on the cusp of greatness but that is weighed down by the sins of its past.  As fans and viewers discovered during the first season, the secret to this show’s success are its deeply conflicted and compelling characters.  Helmed by Tom Weston-Jones as Kevin Corcoran, a cop quick to dole out frontier justice, but with a heart of gold, COPPER’s rich cast brings the light into a dark world of crime in 1860’s New York City and the black-hearted men and women who reside there.

The first season saw Corcoran in dogged pursuit of his missing wife and the person responsible for the death of his 7-year old daughter.  But all answers are not always worth search for as resolution of that mystery brought more tears of anguish than joy.  Simultaneously, he found out that his best friend Francis Maguire (Kevin Ryan) was not the man he had thought him to be and it forced him to make some deadly decisions.

Paralleling the stories of Kevin and Francis was the tale of Robert Morehouse, a rich politician’s son who found himself swept up in a plot to burn down New York.  With his wily heart intact, the plot was derailed and the city saved.  Alas, it may yet still bring down Francis’ new ladylove, the deceptive Elizabeth Haverord (Anastasia Griffith).

COPPER is richly built upon complex characters both of the male and female persuasion as it recognizes that evil and ambition reside in the hearts of both sexes.  Mirroring the strong self-preservation and egocentric tendencies of their male lovers, both Elizabeth and a local madam Eva Heissen (Franka Potente) are forces to be reckoned with.  They will literally do anything to achieve their personal goals.  But the men who love them seem oblivious to their true natures and their capacity for evil deeds that would send shudders into their very souls.

The second season of COPPER introduces a new player in town, both in the precinct and in the political circles of which they all travel.  Donal Logue is introduced as Brendan Donovan a war hero who now aspires to much more.

Alas for our hero, Kevin Corcoran, he does not seem to always recognize that all men’s hearts are not as pure as his own.  Fortunately, his friend Matthew Freeman (Ato Essandoh) seems to stand firmly by his side through the treachery brewing around them.

To see what dark paths they all must trespass this season be sure to tune in for the 2nd season premiere of COPPER on Sunday, June 23rd at 10PM on BBC America. (7PM on Showcase in Canada)