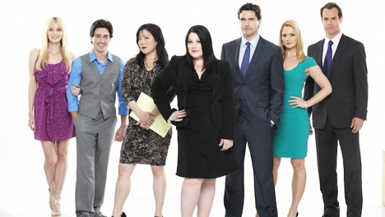 The fifth season of DROP DEAD DIVA returned with a few tears and a few heavenly twists.  In last week’s returning episode, “Back From the Dead,” we watched with sadness as Jane’s (Brooke Elliott) guardian angel Luke (Carter MacIntryre) was suddenly recalled to Heaven for failing to keep Jane and Grayson (Jackson Hurst) apart.  This was a vivid reminder of how unforgiving Heaven can be with mistakes.  Just like his predecessor Fred (Ben Feldman), who revealed his true identity to Stacy (April Bowlby) and got yanked back to Heaven; when Luke similarly failed in one of his primary duties, he was recalled as well.  This opened the door for DROP DEAD DIVA’s newest angel, Paul (Justin Deeley).  Heaven giveth and Heaven taketh away.

Fortunately, each time we lose an angel in DROP DEAD DIVA, another pops up and just as charming as the one before.  While Jane may find being saddled with a guardian angel taxing and annoying, for viewers it is a little gift from Heaven as we watch all their earthly shenanigans with glee.  Both Fred and Luke were not immune to the lure of the human heart and were tempted by the lovely ladies in Jane’s life.  Fred had fallen head over heels in love with Stacy, and actively pursued her – which led to his ultimate downfall as he revealed his heavenly nature to her.  Luke also felt a fondness for Kim (Kate Levering) and was trying to initiate a relationship by inviting her on several dates, but due to Kim and Parker’s (Josh Stamberg) close relationship and Kim’s resulting pregnancy, that did not get very far.   So it will be with great curiosity to see if Paul, Jane’s latest angel, will be immune to the human charms.  From what we have seen so far, Paul is a bit enraptured with himself and his ability to score a modeling job, but that may just be an initial state of euphoria of being stationed on Earth.  As heaven for all its blessings, lacks the zest of human life.

But Paul may be just what Jane needs right now.  He is not distracted by his own love life and may be more readily available to keep Jane on track.  Though we are not sure at his sleuthing ability as he was unable to locate Old Jane (Natalie Hall) before she turned up at Jane’s door at the conclusion of last week’s episode – and Old Jane looked suitably angry and intent on reclaiming her former life.  The life that Deb usurped when she returned from Heaven and claimed Jane’s body, when Old Jane died.  This makes Old Jane a bit of a “devil” in Jane’s life.  She is back to stir things up, out Jane (formerly Deb) as an imposter and attempt to take back her life.

However, I suspect that Old Jane really has no idea how difficult that may be.  When you have the physical appearance of someone else, people tend not to believe that your soul was put into someone else’s body.  But, in the meantime, Old Jane can certainly make a ruckus and make life difficult for Jane/Deb.  The one thing that may ultimately work in Jane/Deb’s favor is the Heavenly rule of not revealing yourself when you have hijacked another dead person’s body.  Surely Heaven is on top of the fact that Old Jane has abandoned her heavenly plateau, absconded back to Earth, and quickly assigned her own guardian angel to keep her out of trouble too.  More angels, more the fun!  Does this mean that we’ll be getting Luke back?

The battle for Jane’s life is next up in the episode “The Real Jane.”  It will be curious to see how Jane/Deb, Stacy and Paul can keep the lid on the fact that Deb took over Jane’s body, and now Old Jane is back – albeit in someone else’s body.  While Grayson may understand it, it is doubtful that Owen would, and Owen already has a good reason to be mighty angry and confused with Jane since he caught her kissing Grayson on their wedding day.  If Owen were to find out that Jane was not Jane that might be the last straw.

To see how the battle between the two Janes ultimately gets settled, be sure to tune in for an all new episode of DROP DEAD DIVA on Sunday, June 30th at 9:00 p.m. on Lifetime.  Saying a little prayer for a little heavenly angel intervention!