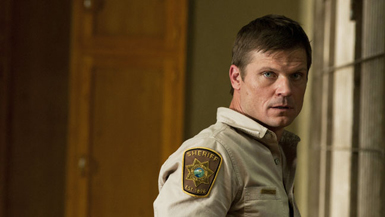 When we first met Branch Connally (Bailey Chase) in LONGMIRE, we were certain he was the squeaky-clean, good-boy hero of the story.  Since then things took an interesting turn, Branch surprised us all by showing signs of dabbling in the darker side of life.  He showed more political ambition and drive than anyone gave him credit for and that began to complicate the world of LONGMIRE.  Then as if dating the sheriff’s daughter behind Walt’s back was not enough to make us wonder about his intentions, taking political bribes certainly caught our attention.  That bad-boy side was starting to shine through.

In a recent exclusive interview, star Bailey Chase shared a few thoughts on his character’s emerging duality and why he hopes fans will stand by Branch as the election controversy plays out this season.

We’re just loving the second season of LONGMIRE.  Everyone has so many secrets and mysteries!
BAILEY:  (Laughs) For me personally, Branch has really kind of lost his mind.  So that’s been fun to play.  We’re shooting the election episode this week, and that’s exciting too.

This season seems like they decided they could go for anything and everything and said, “Why not just do it?!”
BAILEY:  Why not? We didn’t really know coming in being a scripted show on A&E. There was a lot of unknown there. Then the first couple episodes of this year were over 6 million viewers.  We’re just kind of pinching ourselves over here and hoping that it lasts.  It’s all good and what’s even better is just really a cool group.  We spend a lot of time together outside of work.  It’s kind of a dream job.

Looking back a bit, what drew you to a modern western type of series?
BAILEY:  That goes back to my childhood.  I spent a lot of my time growing up watching Clint Eastwood westerns. So it’s always been in my brain that I wanted to be Clint Eastwood.  That hasn’t totally happened, but I keep on trying.  I grew up riding horses, and I kind of had a mixed bag growing up between Illinois, Florida and North Carolina.  I spent a lot of time around horses and it feels like its all coming full circle right now.  It’s great.

When we were first introduced to Branch in the first season, he seemed like a straight-laced guy. But the more we’re getting to know him, it’s like his life has frustrated him to a degree that it has propelled him in an unknown direction.
BAILEY:  I need to take some responsibility for that.  It’s not all on the writers. When I was originally approached about the show, I auditioned for the role of Walt Longmire (Robert Taylor). But they said they were going to go with somebody with a little more life experience and then they said, “We think you’re perfect for Branch.”  On the page, at least in the pilot, I didn’t feel like it was all there and they agreed with me.  They said, “This is what we have planned.  You’re not quite Walt.  You’re almost there. But we want a formidable adversary, or the show is not interesting.” And ever since the pilot, Branch has been becoming more and more of his own man.  It’s been really interesting to play.

Do you think Branch is trying to shed some of that squeaky-clean image and embracing a darker side of himself?
BAILEY:  Absolutely.  I don’t know if Branch is conscious of that with the situation the way that it is.  It is just kind of steering him further and further down that path.  It’s been  really fun to play because week-to-week I don’t know where he’s going.  Sometimes I turn the page and I’m like, “Really?! Okay, this is going to be fun.”  And what happens in this election episode is real interesting too.  I think it’s a turn that most of the audience won’t see coming.

So Branch is going to win?
BAILEY:  I’m not saying that!  I can’t way what’s going to happen, but it’s a turn that people won’t see coming.

At this point, what has surprised you the most about Branch?
BAILEY:  Good question.  I didn’t see him teaming up with Jacob Nighthorse (A Martinez).  And I didn’t see coming what has happened between Branch and his dad, which is about to air.  So I don’t want to spoil that.  I didn’t see that coming.

Given how Branch is on a slippery slope here, what do you enjoy about portraying him?
BAILEY: (Laughs) That’s part of the fun.  I enjoy getting a rise out of the audience.  If you’re not getting a reaction, then I should be worried.  Branch is kind of a guy that you love to hate.  So it’s been good that way.

With the election coming up, why should we vote for Branch? Why would we choose him over Walt to be sheriff?
BAILEY:  If you believe in technology and the way of the future and more business and development, all of that stuff is going to appeal to you and to vote for Branch.  Walt, obviously, is stuck in the past and there’s a line where it says, “Branch Connally is the way of the future.”  (Laughs)  I have to laugh ‘cause I’m thinking of Branch’s campaign ad where he says:  “I’m Branch Connally and I approve this message.”  Katee [Sackhoff] and Adam [Bartley] really like to give me a hard time about what Branch is up to.   So that’s been fun.

We’ve seen that each of the characters has some secrets of their own and a darkside of their lives that they are all hiding from each other, and Branch could hold is own if he knew about all that.
BAILEY:  Absolutely! And I’ve been excited to see Katee’s character Vic where we’re really starting to see more about her past and what happened in Philadelphia and how she ended up in here.  So that’s been great.

What’s curious is that Walt and Branch are both so wrapped up in their own lives that they seem oblivious to what is going on with the people around them.
BAILEY:  It’s funny that you pointed that out.  It’s something that’s coming up in about two episodes.  The writers are aware of it, and right now Walt and Branch are oblivious.  It’s so obvious what’s going on, yet they are so blinded by their own competition in the election.

We have seen from the previews that it looks like there’s an assassination attempt in this next episode.  What’s going on there?
BAILEY:  It does kind of look that way for sure.  The town hall debate is a big story point of the this next episode.  I can’t tell you if someone gets shot.  That’s the surprise.

I imagine your table reads must be highly entertaining as you’re all wondering where the next script is to find out what’s going to happen.
BAILEY:  That’s so funny that you bring up table reads because we stopped having them about a year ago.  I like table reads.  It’s a great way to get an episode up on its feet and say the words out loud and get at least an idea of how the other characters are going to play it.  But honestly we don’t have time.  The scripts come out too late and the guest roles are cast out of L.A. or New York, or even Canada and Austin, so by the time the guest cast gets to Santa Fe, they are usually shooting the following day.  So table reads are not a luxury that we have.

Sounds like you’re filming by the seat of your pants, almost.
BAILEY:  It is a little bit.  Louanne Stevens, who worked on FRIDAY NIGHT LIGHTS, she tells similar war stories about getting pages on the way to the set – and that was a great show.  I hope people feel the same about LONGMIRE.  We are kind of doing it on the fly.  You’ve definitely seen that in terms of the weather.  One minute the sun is shining, then it’s raining, then it’s hailing and then it’s snowing by the end of the scene. That’s all real.  We just go with it.

This is why LONGMIRE feels real, it is real. You’re doing scenes up against the real world out there.
BAILEY:  It is.  One of our favorite sayings out here is:  “If you don’t like the weather, wait five minutes.”  It’s pretty much true.

Because you are all working so hard and on the fly, do you find that there are scenes that end up on the cutting room floor that you wished people could have seen?
BAILEY:  (Laughs) You have inside information ‘cause you just touched on two of my hot spots.  That is the hardest thing for me, seeing the final cut.  For example, this next episode is 9 minutes long and they’re like, “It’s perfect as it is, but we need to lose 9 minutes.”  They don’t know how they are going to do it.  That’s probably the hardest thing for me – seeing the things that get cut out for time because we do pour our collective heart and soul into every episode.  Unfortunately, it all can’t just stay in.  Not enough time.

Is there one scene that you wished the fans could have seen that you were in?
BAILEY:  The one that immediately comes to mind was in 201, the season premiere this year.  Lou [Diamond Phillips] and I had a lot to do on horseback when Branch and Henry go out looking for Walt, and unfortunately a lot of that stuff was cut out.  It was cool on a couple of levels.  One, just kind of being out there with Lou on horseback in the snow.  That was great.  Two, I don’t get to work with Lou that much last year, so we both pretty excited when that script came out.  Then to watch it – we did a big premiere party with tweeting and all that – and on the inside I was kind of dying because all that stuff didn’t make it in.  That’s just the unfortunate reality of what we do.

We don’t normally see scenes with Henry and Branch.  They have an interesting kind of chemistry.  It would have been fun to see them together more on screen.
BAILEY:  All of it wasn’t cut.  For a second, we’re on the horses and we ride up thinking Walt is dead.  Then there a little bit in the next episode at the Red Pony where Branch is trying to find out about Cady (Cassidy Freeman) and Henry shoots him down.  So we did have some scenes.  Unfortunately, all of it didn’t make it in.

LONGMIRE is a fun show.  Are there any teasers you can offer as fans watch the rest of the season?
BAILEY:  Don’t give up on Branch just yet.  Hang in there.  We got a nice little taste of Branch and Cady in this last episode.  They’re not a full time thing yet, but if you keep watching that will pay off.  Then we’ll see what happens in the election in a few weeks.

To see where the complicated romance between Branch and Cady is headed and if Branch can actually win the election up against Walt for sheriff and what other fun surprises they have in store, be sure to tune in for all new episodes of LONGMIRE on Monday nights at 10:00 p.m. on A&E.