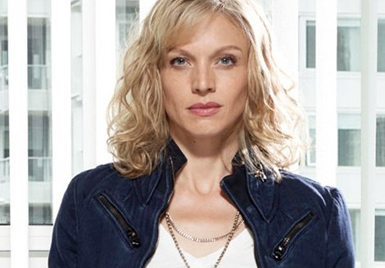 Introducing one of this summer’s intriguing new police dramas, ABC debuted the new Canadian series MOTIVE starring Kristin Lehman, who plays Detective Angie Flynn.  The twist of the series is that it introduces the killer and the victim right away and then slowly ties their stories together to show how even normal people get caught up in events beyond their control.  How circumstances can make literally anyone a murder.  For Detective Flynn, digging into each crime reveals the crucial link of motive.  What drives people to do what they do and at what point does it drive them to commit a crime of such a serious nature.  In a recent exclusive interview, Kristin Lehman candidly shared her thoughts on what drives her character and what she most admires about this kind of intriguing role.

So who is Detective Angie Flynn and what drives her to track down criminals?
KRISTIN:  Angie is a really strong detective who is really good at her job.  She loves her job.  And she’s a single, working mom raising a teenage boy. So really everything she does is informed by that.  Her fierce love for her son and a really strong belief in herself.  Really both of things are what inform her in what drives her to crack cases.  She’s slightly addicted to it.  She’s found a place where she belongs.  She belongs with her son and she belongs on the police force.  So it’s really great to inhabit her in those two places.  She doesn’t stray too far outside her comfort-zone for all kinds of reasons.  She’s full of self-acceptance and I really love playing a woman who has that, but is also vulnerable and is not embarrassed to show it because she feels she’s doing the best she can.

What is the one quality you most admire about her?
KRISTIN:  Her self-acceptance.  She’s not comparing herself to an unreachable or unattainable or unrealistic standard, whether that is a standard of beauty, a standard of body.  She’s not trying to be a man and she’s just herself.  That’s unbelievably refreshing.  I think she worries about being a good parent, but she accepts that she’s doing the best that she can do. She isn’t degrading herself by trying to live up to some standard of perfection.  It is just remarkable to portray her.

Angie also has a unique chemistry with her partner.  They get along so well, even when they drive each other a little crazy.  What would you say is the secret to the success of their partnership?
KRISTIN:  That they are both mature.  Both Louis [Ferreira] and I have been around for awhile, so we play these characters as people who know better than to mistake the intimacy and trust that they have with each other for something romantic.  They know that in their life they need somewhere to be able to project a hero and they are happy to hold that for each other. That’s why they work so well together and why they trust each other.

Working on MOTIVE seems like it is a job that you would learn a lot from.  What have you learned from working on the show?
KRISTIN:  I have noticed that I am way more observant.  There’s a ton of things that I observe and conclude in my surroundings all the time now.  I’m surprised how natural it comes to me.  Even if it’s “where’s that sound coming from” or  “what is that sound?”  I’m way more observant.  Not so much in a suspicious way. I also dare to be as self-accepting as Angie.  Like what if I wasn’t afraid in this situation, what would that feel like?  I’m grateful to get to play a character who teaches me those things.

What is the fun side of working on a procedural like MOTIVE?
KRISTIN:   For me, it’s fun to get words in a script and then work to make them feel natural.  That to me is the most fun.  Because, to tell you the truth, working in television is extremely long hours.  It takes a lot of energy and a lot of discipline, so I’m very lucky that I have very funny co-stars.  I work with really lovely people and that is a lot of fun.  But I’d also say the whole package is fun.  Just trying to stay healthy and focus and make a show at the same time.  I think it is a worthwhile and valid and valuable pursuit.

This week’s episode is entitled “Public Enemy.”  What can you tease about it that fans should look forward to?
KRISTIN:  I  think it’s one of our best episodes.  I love it.  I think we have excellent episodes to come, but this is my favorite.  Our guest star Molly Parker was such a treat for me.  Camille Sullivan is also wonderful to work with.  But this is the very first killer where you’ll see that the crime is premeditated.  All of our other crimes really challenged the viewers’ idea of who a killer and victim are.  Like you see an unsuspecting person turns out to be the killer and you think: “How can that be the killer?  Doesn’t the killer have to be bad and morally wrong?”  In this case, it’s the only crime that Angie and Vega tackle where it is premeditated, and yet you still feel compassion for the killer.  That I think is really interesting and it’s a very well addressed episode.

To see more of the fascinating mysteries of MOTIVE, be sure to tune in Thursday nights at 10:00 p.m. on ABC.