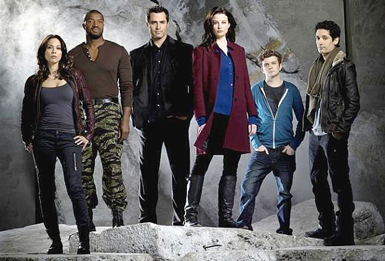 Falling in love with TV shows is a wonderful feeling.  There’s the rush of tingling excitement over each new episode.  Earlier this year, Syfy debuted the first season of the Canadian sci-fi series CONTINUUM and I fell head over heels.  I loved the idea of a time-traveling series with the heroine stuck in our present day trying to get back to her future and having to keep her identity a secret.  There was a sense that everything could be snatched away from her for a second time as she struggled to maintain some kind of life as a police officer and making tentative friends and allies.  So as we followed Detective Kiera Cameron (Rachel Nichols), we grew more immersed in her intriguing world straddling the police department dilemmas with her partner Det. Carlos Fonnegra (Victor Webster) and her attempts to find a way home with the aid of a young teen super-genius, Alec Sadler (Erik Knudsen).

With a bombing at the end of the first season and the ramifications of the death of Alec’s stepfather and the uprising of Liber8, the second season of CONTINUUM started off at a running pace for the season.  However, now Alec was no longer just the helpful boy in the barn, he was a young man in the city in search of his place in this world; with his half-brother Julian (Richard Harmon) miraculously released after his part in the bombing. Simultaneously, the relationship between Kiera and Carlos was reaching a boiling point as Carlos began to piece together that Kiera was not exactly who she said she was — leading to the big reveal and Carlos finding out the big time-travel secret.  But none of these things brought peace and stability into Kiera’s new life. In fact, tensions got worse at the police precinct as Agent Gardiner (Nicholas Lea) stirred things up and VPD Inspector Dillon found a creative way to regain his position with the help of Escher (Hugh Dillon).  Liber8 was up to their usual anarchy tricks — with Sonya (Lexa Doig), Travis (Roger Cross) and Garza (Luvia Petersen) all bringing their personal history and treacherous backstabbing into the mix.  Julian upon his release quickly became a quasi-leader of an anarchist group trying to make a peaceful protest, yet failing miserably.  Kellog (Stephen Lobo) found himself facing off against Escher and it became a tug-of-war for Alec’s skills and technology — which inevitably led to Emily (Magda Apanowicz) being sent to spy on him.

But with all these shifting alliances, secrets and political agendas, everyone forgot one key thing: Alec is just a boy.  It was a beautiful, if not a little stressful, watching Alec fall in love with Emily.  Young love in all its innocence.  It was even more touching to watch as Emily fought her own emotions in falling for Alec — since he was supposed to be just an assignment — and then she became his most ferocious protector.  For all her heroic efforts, Kiera had lost sight of the fact that Alec was not just a tech guy helping her; he was a boy who had fallen in love.  And it cost them all dearly.

Emily gave Escher the Arc technology that she had told Alec she had destroyed and then tried to get Alec to runaway with her.  Even once Alec knew the truth, he still blindly loved her and trusted her.  So as Emily and Kiera stood on the rooftop surrounded by gunfire, we knew one would not make it out alive.  Emily sacrificed herself and tossed the time-travel sphere out over the building edge.  As the bullets rang out, Emily fell to the ground and Alec’s life was destroyed for a second time.  Unlike in the first season when Alec’s stepfather was killed, this was someone he really loved.  Emily was his first love and the pain of her death is going to haunt him.

As we shall see in the second season finale, all these cruel, painful life lessons are not forging a stronger man — but a more ruthless man.  Alec has lost everything because of the twist of fate that sent Kiera back into the past and into his life.  He knows that an older version of himself sent Kiera back deliberately, but surely he never wanted history to repeat itself or that he would be required to lose all that he loves in the process.

CONTINUUM offers the parallel stories of Alec and Kiera.  Their lives were intertwined in the future and again by the fact that Alec sent her into the past so they could begin their journey again.  Is this just history repeating itself or does Alec know a way to ensure that it doesn’t?  Surely Alec would never have wanted his past-self to fall in love and have his true love ripped away from him again.  Or is the future incrementally changing and these are new events never meant to happen and yet are?

What I love most about CONTINUUM is that it teases the brain to consider:  Whether it is more important to preserve the future, or change the future?  Are we rooting for Kiera to one day get home again, or does she deserve a better future?  Or is Kiera’s future now and she does not realize it yet?  It’s mind-bending and confounding to think about, yet it is mesmerizing to consider.

With one episode left this season, and a whole new season to look forward to, CONTINUUM is certain to surprise us again and I cannot wait.  I have loved every surprise it has offered so far and am eagerly looking forward to what future surprises it holds in this future or the next.