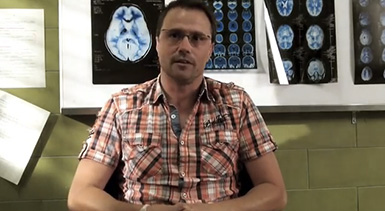 A supernatural series like HAVEN requires stellar visual effects to integrate into its visual look to keep viewers engaged in the outrageous and unbelievable stories that it weaves each week.  Fans must believe that the impossible is possible and that in the HAVEN world, literally anything can happen — from earthquakes to meteorites to sudden tsunamis in the sleepy, “troubled” world of Haven, Maine.  In an exclusive interview, visual effects supervisor Kris Wood shared what he loves about working on HAVEN and what unique challenges it poses to create all those marvelous visual effects.

After seeing all the amazing things that HAVEN’s art department creates, what exactly are the types of things that you would use as a special effect on the show?
KRIS:  The stuff that we do is the kinds of stuff you can’t do in front of the camera.  Things that are just impossible to do.  Examples: spaceships, 8-foot tongue coming out a guy’s mouth, destroying the lighthouse again and again, lots of weather events, blowing avatars across big distances.  We’ve got some great storm systems coming up this season with some scary stuff.

In Season 3, you also did some great stuff with the water effects, like the big wave down main street.
KRIS:  The water episode was a big challenge.  The crabs were all CG. We had sharks out in the water.  We had giant waves traveling down the street, which was kind of cool.  We got a big front end loader full of water out in the street and dumped it and then then painted out the front end loader and just kept the water that was dumping.  So they keep us on our toes.  It’s always challenging.  If you work on a space show, you know it’s always going to be spaceships. But if you work on this show, you never know what you’re going to get.  It’s pretty cool.

You said like for the water scene you’d have to take the truck out of the scene.  How would you do that?
KRIS:  What we do is we get the truck out of the way and from all of our camera positions and a bunch of still frames, we shoot what the scene looks like without the truck there and then we roll the truck in and we dump the water and now we have material to paint behind and over top of the truck where it used to be essentially.  So it is obviously a little more complex than that, but that’s the basic gist of how we do it.

What about like the Season 1 earthquakes? How do you do that?
KRIS: Like when Nathan’s real dad fell down the crack?  We just take a shot and literally have an artist create by hand what the crack would look like and then add it to the shot.

How much is done with camera angles versus computer graphics?
KRIS:  Clearly the crack didn’t exist so that’s all CG.  But for the scene, the camera looks straight down and then 80% of that frame is stuff we’ve created.  We had the actor run up and fall down on a green screen covering a big stunt mat and flail around a little bit and then we just took that little image of him and dropped it in a hole that we created.

So what’s your process when you get each script to assess how much will be special effects that your team will create?
KRIS:  We go through the stage direction pretty intensely and have discussions with writers, producers, everybody down the line.  But again, we’re on a TV-timeline and TV-budget — it’s not a feature film — so sometimes they get pretty ambitious. So then I have to tell them, “Wait ’til HAVEN the movie comes and then we can do all the cool stuff.”  For right now we come up with really creative ways — and the creative team on this show is amazing.  They really get it. I honestly don’t run across a lot of situations where I have to say, “We can’t do that because it’s too big or too expensive or not enough time.”  Just from watching the show, there’s some pretty ambitious stuff that we do.  The art department is fantastic. Then the practical effects guys who do our explosions and bullets and all that sort of stuff, it’s amazing. They fabricate some really neat stuff.  So we have amazing support from all of the other departments, which kind of makes my job a little easier.

Is there ever a tug-of-war between the art department and special effects over who is creating what for the episodes?
KRIS:  (Laughs)  Actually, no.  There’s plenty to go around and it keeps everyone busy.

So once you find out that you’re going to be doing a special effect for a scene, how do you first go about setting it up to create it?
KRIS:  What we do is assess what it is.  Like is it a lighthouse to be blown up? Does the lighthouse exist already or do we have to build the lighthouse? Is something hitting it or is blowing up from inside?  And what would that look like in real life?  So we’ll go search the internet and see if we can find some references if someone else has done this as an animated special effects version.  Look at a few examples and come up with a concept that everybody buys into and then we decide what elements we need.  For example, we just blew up a van and it was an opportunity to take our practical effects guys and actually fill the van with gas and blow it up.  Lit it on fire and make a giant fireball.  Then we can take that fireball in vis-effects and multiply it so we get this great explosion on set, it doesn’t freak out the neighbors, and then we can make it ten times bigger in visual effects by multiplying it and adding other elements to it.

Do you have a personal favorite of the kind of special effects you like to work on?
KRIS:  Our compositing and CG guys are amazing.  I love to see stuff like that.  There’s two things that I like about this show:  (1) we do a lot of FX that you don’t know are effects.  It’s just to enhance and tell the story. For example, when it’s a night scene and we’re zooming in over the town. We never shoot those at night ’cause if you shoot them at night, you can’t see anything.  So we take those shots and turn them into nighttime shots and then we add lights into all the little windows. It’s not something that would be mind-blowing FX, but you don’t know its special effects.  Our guys do an amazing job at that.  Then (2) the other things that I love are the ones where we can really show off what we can do.  Again, the guy with the 8-foot long snake tongue — I thought that looked great.  Meteors hitting the lighthouse.  I thought that looked fantastic.  So there’s some stuff that we get a chance to do that looks pretty cool.  I really love doing that stuff.  That’s the kind of stuff I got into visual effects for.

What is the most challenging special effects to work with?
KRIS:  The most challenging is just in terms of the amount of control that you need to have on set is when we’re marrying a big practical effect, like water, into a visual effect and there’s a lot of factors going on.  For example, in the water episode, we had 4 cameras going. So we have to orchestrate where all the cameras are and what they are all seeing and that they are all doing the right thing, that we get all the background plates that we need — which, to be honest, sometimes we don’t because there’s a timeline and we only have so many hours in a day to get it done.  So a lot of times when we don’t get all the material we need, then we start improvising some.  Then organizing all the crew and that stuff, so it’s sort of like literally running an orchestra.  There’s all these instruments trying to play the same tune and you have to keep them working together.

How long do you have to work on the special effects for each episode?
KRIS:  10 days on average.  But the really complex 3-D stuff we start probably quite a bit sooner.  At least building the models ’cause we can get reference and we know what those will look like.  So we’ll start working on those two weeks ahead of when shots get turned over to us, give or take.

Is there any particular visual effect that you are most proud of?
KRIS:  Wow, the problem is we have done so much cool stuff.  It’s really the whole show.  It has been so rewarding for all of us as a team, as a visual effects team on our end, to work on and deliver.  We’ve been working as a team since THE DEAD ZONE, so we’ve been working together for 10 years or so.

Did you ever envision that HAVEN would grow into the kind of show that would be using this much visual effects?
KRIS: Right from my first meeting with these guys I got the feeling that it would be a fairly big deal for this show in terms of visual effects.  But I think it has turned about to be quite a bit bigger and has run quite a bit longer than I expected, and that’s fantastic.  It’s so lucky.  It’s a show where it could go anywhere and you just never know.

In this video clip, Kris also weighs in on the Team Nathan vs. Team Duke debate and what was the best surprise revealed in previous seasons on HAVEN:

To see more of Kris and his visual effects team’s handiwork, be sure to tune in for the premiere of Season 4 of HAVEN on Friday, September 13th at 10:00 p.m. on Syfy.  Surely, they are bound and determine to blow up that cursed lighthouse at least once more this season!