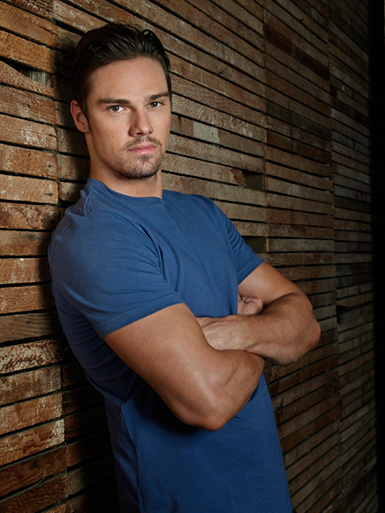 The good news for fans is that Season 2 of BEAUTY AND THE BEAST comes back on a high-octane note. When last seen in the finale of last season, Vincent Keller (Jay Ryan) was being airlifted away in a net — so the search for Vincent is on. In the three months that have passed, Catherine (Kristin Kreuk) and J.T. (Austin Basis) have been searching non-stop as they are determined to rescue Vincent before Muirfield can turn him into the super-soldier they always wanted. In a recent press interview from the set, star Jay Ryan candidly shared what that three month time-gap means for Vincent and what challenges lie ahead for him once he is found.

We know that Vincent’s alive and out there somewhere, and presumably being held against his will.  What’s next for him?
JAY:  He is alive, but he’s not being held against his will.  He’s an upgraded version of himself.  He is what the people who created him always intended him to be in the first place, which is very much a super-soldier who is to serve, protect and eradicate anything in his way.  So he’s very different when we open in Season 2 — physically as well, as the beast prosthetic has changed and the makeup is all changed. So I guess that’s to do with the backstory. This beast has been rewired, therefore everything changes: the way he fights, the way he thinks, and who his loyalties lie with. And he’s got a new haircut and jacket this year.

Since Vincent on a parallel journey in Season 2 and doesn’t connect with everybody right away, does Vincent have any awareness of them looking for him?
JAY:  Vincent doesn’t have much awareness of the past right now due to his rewiring.  He has lost a lot of himself, as we come to know.  So he has a mission which has been supplied by a higher power, which is controlling Vincent and that mission has nothing to do with Catherine or J.T. at this point in time.  So when he’s intercepted by these people who love him very much, he has a hard time trying to figure out who these people are.

What is it like to film scenes between Vincent and Catherine and J.T. now?
JAY:  There’s a new dangerous element towards Catherine and J.T. in that Vincent can strike at any time, and if he feels like he is being threatened in any way or fooled in any way, then he’s probably going to get them out of the way.

Is Vincent out of control a little bit?
JAY:  I think he’s very much in control, but just on a completely different path.  I think as the season goes on that control will begin to unravel, and he is trying to figure out where his loyalty lies.  Are J.T. and Catherine telling him the truth about his past, or are the people, who are basically running the show now, are they the ones that he should stick with?

We heard that one of Vincent’s old military buddies is joining the show. How is that going to come about?
JAY:  There’s always the question of this platoon of soldiers that were turned into these creatures. They were all supposed to be eradicated, but we never really believed that for one second.  There was always going to be someone who jumped ship like Vincent.  So they show up. But it’s at a critical time for Vincent because he’s started reprocessing himself on who he really is and how Catherine and J.T. belong in that side of his life.  So when he is intercepted by an old buddy, it shakes things up a little bit.  Because all Vincent is right now is trying to gain memories and to cling on to this new person that he actually realizes he is.  He’s a real human being with a life, not this robotic soldier.  So it kind of dulls his senses a little bit and puts him in a vulnerable position.  So J.T. and Catherine begin to protect Vincent again and Vincent sees that was the relationship that they used to have. That these people are very much about helping him.

What’s the interaction like between Vincent and Gabe (Sendhil Ramamurthy)?  We understand he’s coming back a changed as well and with Vincent having no memory of Gabe, there’s a bit of a blank slate there.
JAY:  He does have a blank slate.  Gabe is just a little fly to swat away to Vincent right now.  He really doesn’t know who this guy is, he just keeps getting in the way.  Gabe does kind of come to Vincent with an ultimatum of, “I can help you,” and Vincent takes the bait ’cause it does in a way help him on this mission that he’s on.  So Gabe can be an ally to Vincent, in this new sort of road we are taking with this season.  But, obviously again, J.T. and Catherine are trying to protect Vincent from what Gabe has done to him before.

At its heart, BEAUTY AND THE BEAST is still a romance.  What kind of romance elements are you able to incorporate of that when Vincent does not understand his former relationship with Cat?
JAY:  It’s an opportunity for them to fall in love all over again, which is always a good thing ’cause the beginning of love is always the most exciting, probably — for television anyway.  That romantic element is obviously the heart of our show.  There’s a lot of new beats we can play with Catherine and Vincent’s relationship.  They moved very fast in Season 1 and so we want to slow that back down so the romantic element can be there; instead of the more solid relationship where things become a bit more tricky.  I think that the audience that we had in the first season will connect to it.  Even though Vincent may seem very different in the beginning in that he doesn’t recognize who Catherine is or the love that they had, there is that little twinkle in the eye between them.  Its the destiny of the two lovers.  I think that’s what starts triggering Vincent to remember who he was and which will pull him back into his old self.

So there was some concern that J.T. may have had to relinquish the Gentlemen’s Club in Vincent’s absence this season.
JAY:  Yeah, we upgraded to a new set in the final episodes last season, which was very lavish.  But now it’s a gentlemen’s club with only one gentleman in it. (Laughs)

With J.T. is living all on his own in the Gentlemen’s Club, where is poor Vincent living these days?
JAY:  Vincent has a new headquarters that is supplied by the people that are now controlling him.  That’s about all I can say without giving more away.

On that final teasing note, be sure to tune in for the Season 2 premiere of BEAUTY AND THE BEAST on Monday, October 7th at 9:00 p.m. on the CW.  Vincent may not remember his love for Catherine, but it certainly pulls at his heart and he feels it every time he is around her.