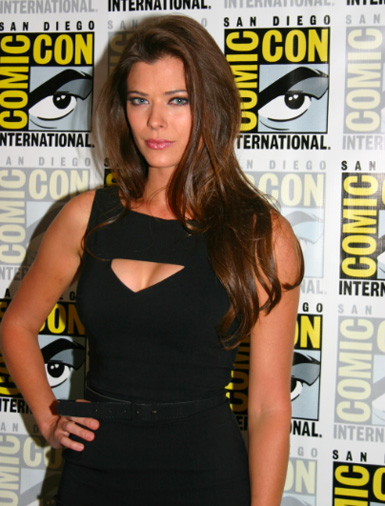 In the TV series THE TOMORROW PEOPLE, one day a teenage boy wakes up and finds out that he is not entirely human.  There is a newly evolving race of humanoids who call themselves the Tomorrow People and they are being hunted by the government.  No teenage boy should ever find himself faced with such a terrifying revelation. Fortunately for Stephen Jameson (Robbie Amell), he is not entirely alone.  He has someone to help guide him through this terrifying process, and his guide is a lovely young woman known as Cara (Peyton List).  Through use of her own abilities, Cara introduces Stephen to who the Tomorrow People are and why the government wants them eradicated.  In an exclusive interview, star Peyton List talked about what drew her to the complex role of Cara and the world of THE TOMORROW PEOPLE.

What drew you to THE TOMORROW PEOPLE and the role of Cara?
PEYTON: I was equally drawn to the story and the world THE TOMORROW PEOPLE creates, as I was to the role of Cara.  As I read the pilot script I was engrossed in what was happening in the plot while simultaneously falling more and more in love with Cara.  She was exactly the type of character I was wanting to play, in a story I found myself completely invested in.

What do you most admire about Cara?
PEYTON: I think what I admire the most about Cara is her passion for what she believes in.  She’s incredibly brave and determined to protect The Tomorrow People at all costs.  Her belief in what’s right is unshakable and you can’t help but respect her certainty.

How would you describe Cara’s relationships to John and Stephen?
PEYTON: In the pilot, Cara and Stephen meet face to face for the first time.  It is however under unique circumstances since she has been communicating telepathically with him first.  As they get to know each other, they discover just how strong their telepathic connection is.  It allows them to have a close, intimate understanding of one another that they don’t have with other people.  This leads to a very complicated dynamic for Cara and John because when we meet them in the pilot they are a couple with a history of their own.

What abilities does Cara have and how does she use them?
PEYTON: Cara, like all The Tomorrow People, has the three “T”s. She has the powers of telepathy, telekinesis, and teleportation.  Each tomorrow person naturally is better at one power more than the others.  Cara’s particular specialty is telepathy and we see how she uses it to recruit others like her to join the existing Tomorrow People.

Do we find out what Cara’s backstory is right away or is it a mystery?
PEYTON:You will learn a lot about Cara’s back story early on in the series.  Delving into the characters’ history has been particularly interesting because it explains so much about their present behavior and choices.

How hard do you have to train for all those fight/stunt scenes?
PEYTON: The fight/stunt scenes are incredibly challenging but we’re in good hands and have a lot of fun along the way.  We train for them as best we can, then hope the audience enjoys them as much as we do.

What are your favorite kinds of scenes to do?
PEYTON: It’s hard to say what my favorite scenes to shoot are.  We’re extremely spoiled on this show because we have the high intensity/epic fights, but also the more intimate, dramatic scenes that showcase our characters’ emotional journey.  Our cast is truly invested in both the action side of the show as well as the character drama. We hope fans latch onto that, as we have.

Is there a theme that the show is exploring this season?
PEYTON: One of the themes I’ve really taken to in this season is the sort of “fork in the road” concept.  The idea of what you would do if you’re going about your life and one day discover you have these powers.  How would you react? How would you proceed?  Everyone is different, our characters are different, and each is faced with the dilemma of how to live their lives the way they are, knowing what they know.

Best word to describe the show.
PEYTON: One word: Surprising.

To see what surprises are in store in THE TOMORROW PEOPLE, be sure to tune in for its premiere on Wednesday, October 10th at 9PM on the CW (7PM on CTV Two in Canada). There’s more than one big secret that gets revealed in that first hour.