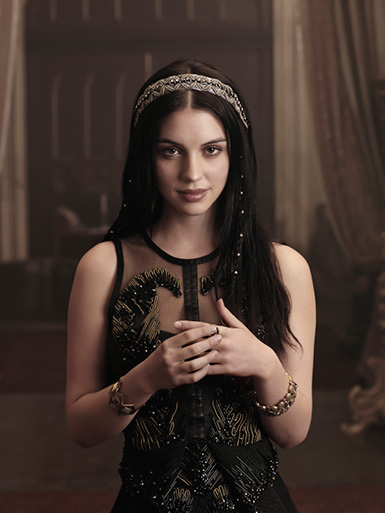 The new CW series REIGN dabbles in historical fantasy, trying to reimagine the era when Mary (Adalaide Kane), Queen of Scots travels to France to reunite with her betrothed and destined love, Prince Francis (Toby Regbo), heir to the French throne.  But Mary’s romantic illusions have not fully prepared her for the reality of political alliances that can be tossed away in favor of a strong and more strategic alliance to protect a kingdom, nor that the fickle feelings of one’s heart can be swayed by a twist of fate.  In a press interview from the set, star Adelaide Kane gave the inside scoop on where Mary’s head and heart lie and whether there may be hope for the dark price Sebastian (Torrance Coombs).

We know what happens historically, but assuming there’s some wiggle room in this show, who would you like to see Mary end up with?
ADELAIDE:  The whole relationship with Bash (Torrance Coombs) is sort of doomed from the beginning.  That can never happen unless he becomes legitimized and becomes the next prince or unless he inherited a dukedom or something like that.  He needs to be exceptionally politically influential for that match to ever make sense for Mary.  Which could happen.  I have no idea what they plan on doing with this series.  They are being very closed-mouthed, which is frustrating. (Laughs) I would like to see Mary with Francis.  She’s pinned so much of her hope and happiness on him, and she’s been dreaming about him all these years.  I would like them to be together, but not just to be together, to be happy together. To be able to be in love and have a little honeymoon period where they could just spend time with each other and love each other and have no misunderstandings and no political mess to wade through.  Relationships are so complicated with or without a whole bloody country to look after.

Mary tells Francis in the first episode, “don’t we owe it to ourselves to give this a chance” and he’s like, “I can’t do this.”  How much of a struggle will it be?  He doesn’t want to put his heart into it or is he willing to try?
ADELAIDE:  Mary’s a little naive.  She’s a little bit romantic to her detriment.  It’s a beautiful thing, but it’s not a smart thing. She wants to throw herself in headlong because she sees the world in black-and-white terms.  She doesn’t understand that there are shade of grey that they need to navigate, and he does.  Not to talk for Toby, but I think in Francis’ case, he’s afraid that if he allows himself to love Mary that he won’t have the strength to leave her if he has to or to let her be with someone else, if that’s what is politically right for her.  And she will leave him for someone else if he can’t give her the support she needs and her country is in danger. She will leave him for someone else because she has to. She can’t be just like, “No, I’ll just wait it out and I’ll wait for you,” ’cause her country could burn to the ground in the meantime.  I think that she has the strength to love him and leave him; I don’t think he has the strength to do the same with her.  I think he’s an all-or-nothing kind of guy.  And that’s why he’s so afraid. In much the same way that a lot of men are afraid of love and falling in love and being committed to one person for the rest of their life.  That’s a very masculine fear and appropriate fear for a young man to have.

Does that mean to Mary that Francis is the hard choice and Sebastian the easy choice?
ADELAIDE:  It’s not a choice for her, really.  That’s what makes it easy.  Bash is never an option. He will never be a real option.  So Mary can relax with him on a level because he has no political clout.  Yet he’s the more dangerous one because she doesn’t guard herself around him and he gets her — instinctively.  Francis doesn’t even try to get her because he’s so afraid of getting to know her and falling in love with her.  They have such a disjointed relationship.  They just can’t communicate.  Whereas with Sebastian, she can talk to him and share her fears. He has nothing to gain by selling her out.  He can’t have anything.  He has nothing but the clothes on his back and the skills that he learns.  He has nothing and therefore he can do her no damage.  So he is the more dangerous choice because it’s always that one guy you feel comfortable with, then you go all a sudden, “wait a minute,” and you realize that at someone you’ve fallen in love with him because he is the only person who really gets you.  So Bash is definitely easier for her, but that’s what makes him so dangerous.

Maybe you can weigh in on the other hunky man on the show, who critics are calling the “hunky Nostradamus”?
ADELAIDE:  We have so many handsome men!  Rossi!  I love Rossif [Sutherland].  He’s so wonderful. I love him to death.  He always smells amazing and gives the best hugs.  He has that wonderful deep bass voice and that vaguely European/French-Parisian accent. I think everyone is going to be a big fan.  He’s a big love-bear! Big teddy-bear.

What can you tell us about Toby and Torrance?
ADELAIDE:  Torrance is a complete loveable nerd. I love him to death. We get along really well and we understand each other. He always takes jokes a little to far, and we pull faces at each other during scenes, which is always good fun.  He and his girlfriend are just amazing people and I love hanging out with them.  And Toby is wicked smart and unbelievably talented.  He’s just such an interesting actor. Like he’s a real actor and it’s a real pleasure to work with him and to watch him work.  He makes it very easy. And he’s so beautiful!  And we have Jonathan Keltz who just joined the cast, who I actually read with when he was testing for the Sebastian role.  The CW is really good like that, where if they like you, they will bring you back for something else.  Like Yael Groblas, who did THE SELECTION 2.0, they brought her in as a recurring guest too.  I love that about this network.  They have actor loyalty ’cause a lot of other people would throw you under the bus.  But Jonathan is gorgeous and a very handsome.  We’re so lucky with this cast. Everybody is so cool, chill and in it for the work. It’s wonderful. We’re really lucky.

What’s the story with the mystery woman who whispers through the screen warning Mary in the first episode?
ADELAIDE:  Oh my god, she’s so creepy!  We have a very eerie scene coming up where Mary crawls into bed and she’s lying underneath the bed. It’s so creepy. I just don’t know if she’s there to help Mary or not.  Is she there actually to help Mary or is there a level of self-interest involved.  Is she winning Mary’s sympathy so she can use Mary later?  Everybody in the show has an ulterior motive. Everybody.  They are just looking out for themselves. I’m trying to look at it from all angles because she’s a scary character.  She creeps me out every time she appears in the script ’cause she breaks into people’s rooms, she steals from people, she trashes things.

Just from what we have seen so far, it could be speculated that she’s actually Diane (Anna Walton), the king’s mistress.
ADELAIDE:  If you watch the series and you see her versus Diane, the woman who plays Diane is quite statuesque. She’s a very tall, beautiful looking woman, and the girl who plays Clarissa (Katie Boland) is tiny.  She’s very petite. She’s very, very small.  So just physically speaking, they can’t be the same person. That would be an interesting twist, but I don’t think Diane needs to stoop to running around the back hallways. That would be a little bit beneath her.  But Clarissa, I don’t know if she’s helping Mary to help Mary, or if she’s helping Mary to spite somebody else.

To meet the two men vying for Mary’s heart and the intrigue that surrounds her in the French court, be sure to tune in for the premiere of REIGN on Thursday, October 17th at 9:00 p.m. on the CW.  One will reign, one will woo, and someone will be betrayed.