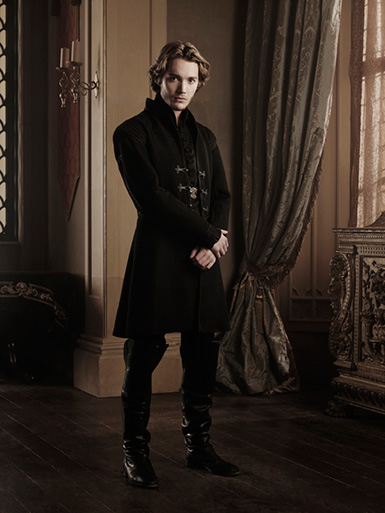 Carrying the weight of an entire kingdom on his shoulders, the young French Prince Francis (Toby Regbo) fears that his long betrothal to Mary (Adelaide Kane), Queen of Scots may not be the best alliance he can make for France.  Worried that marrying her could cost his future kingdom, Francis is torn between his heart and what he knows to be best for his country.  In a press interview from the set, star Toby Regbo talked about the young prince’s dilemma of head and heart.

How does Francis really feel about Mary?
TOBY:  It’s complicated.  He’s got a sense of duty towards his country because he know that he will one day rule the kingdom. He’s known that his whole life, so that’s at the forefront of his thinking and then this girl comes along who is very powerful herself and strong-willed, and there’s a natural attraction to her and he knows that one day they will probably be married, but he is trying to keep his head clear because love complicates everything and he is just trying to do what is best.  But that doesn’t always turn out the way he plans it.

It seems that Francis has a different opinion from his father King Henry (Alan VanSprang), who is ruling France right now, about what is best for the country.  Why is there that difference between their viewpoints do you think?
TOBY:  His relationship with his father is slightly complicated.  Francis really doesn’t want to be his father.  There’s a line in Episode 5 where Francis says, “I’m nothing like my father and for you to imply otherwise is wrong.” King Henry has mistresses and that sort of thing.

But what drives them to have a difference in political opinion?  Why doesn’t Francis want to stick by Mary and align with Scotland?
TOBY:  To be honest, that’s actually something that is not really explained.  It’s sort of brushed over.

Maybe it’s cause King Henry likes Sebastian more than Francis and there is a bit of brotherly rivalry perhaps?
TOBY:  (Laughs) Yeah, that pisses him off.

Yet Sebastian and Francis seem so close as brothers and it really doesn’t seem like it matters that King Henry favors Bash (Torrance Coombs) over Francis.
TOBY:  Well, it’s going to get complicated.  We’re friends underneath, but there’s a veneer that if Francis wanted to he could have Bash killed.  So it’s, “be careful, tread lightly.”  It’s a weird power dynamic between them.

What is it like working with Adelaide [Kane]?
TOBY:  It’s great.  She’s a very, very talented actress.  It makes it very easy.

Any special skills that we’ll be seeing from Francis?
TOBY: I’ve been taking archery lessons, so you’ll be seeing some sweet bow skills.  I shot a bullseye the other day on camera, which I’m really proud of.

To see whether Francis will successfully navigate the fine line between love and the pressures of sovereignty, be sure to tune in for the premiere of REIGN on Thursday, October 17th at 9:00 pm on the CW.  Nothing strikes as hard at the heart as being pierced by love.