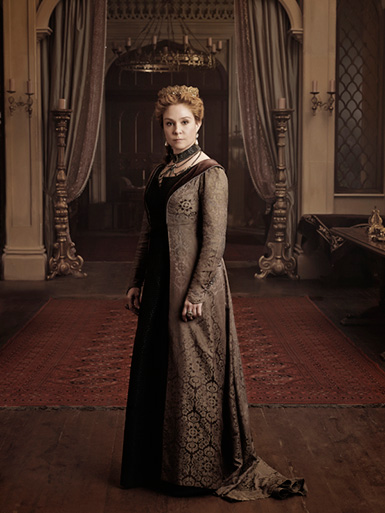 Behind every great man is a great woman and it is no less the case in this tale of French kings and queens.  In the new CW series REIGN, Megan Follows (ANNE OF THE GREEN GABLES) portrays the stately and powerful Queen Catherine de’ Medici, a woman who knows how to rule in the shadows and from the throne.  In a press interview from the set, star Megan Follows talked about how fun it is to portray such a deliciously ruthless queen in REIGN.

How tough is it working on REIGN when there such attractive men portraying Catherine’s husband (Alan VanSprang), her son (Toby Regbo) and the “hunky” Nostradamus (Rossif Sutherland)?
MEGAN: (Laughs) There’s certainly some nice eye-candy.

What is Catherine’s relationship with Nostradamus (Rossif Sutherland) and why does she believe everything he says?
MEGAN:  I think what’s interesting is that she was open to a different way of thinking, which was very dangerous back then and having to do it incredibly carefully because people were being burnt alive during this time.  You don’t even have to get into spiritualism or paganism, just to be a Protestant could get you lit up on fire.  So she’s kind of fascinating because she’s obviously Catholic. She’s negotiating and fighting for the Catholic political position. But there’s a part of her that is open to something else.  But that is such a dangerous position.  It’s so different in a way from our modern world that I think that it is a relief, first of all, to have the company. That’s what she really loves about Nostradamus — it’s his company and their intellectual discourse.  It’s one place where she can actually talk and share and think about idea and watch him grind his herbs.  It’s someplace that she thinks is a safe place and there’s not many places that are.  He is more of a friend.  I think they are intellectual partners. That’s where they are at.

Does Catherine actually get involved with any of the supernatural elements, or does Catherine just have full confidence in what Nostradamus sees?
MEGAN:  She’s certainly taking him at his word.  She’s put a lot of stock in him.  Then what is interesting about the supernatural elements are the explanation of what some of those elements are. Some of the revelations about that are really cool.

Do you now what the underlying belief system is that is being used?
MEGAN:  I know there’s a lot of reference to pagan religions, which would be fascinating because they would have been the oldest and strongest, and there is so much female power in paganism.  If you think about it, it’s really changed and hijacked by modern religions or by the Judeo-Christian forces at the time.  The greatest forces actually are the somewhat psychological ones that are trapped within the walls of this castle.

How much of a living hell is Catherine going to make Mary’s (Adelaide Kane) life?
MEGAN:  (Laughs) Hopefully as much of one as she can get a way with.

What can you tease about what’s to come between Catherine and Mary?
MEGAN:  I think what’s interesting is where Catherine and Mary find themselves aligned together. They have to work together for the same purpose, and that is what I find interesting because Mary is not unaware of Catherine’s dislike of her.  She obviously can never entirely what Catherine is up to.  But they have to join forces at one point to face a common enemy, and that’s fun.  We haven’t even shot some of that yet.  I know that’s coming, so that’s going to be intriguing so see how they will get on the same page.

To find out more about the clever plans of the French Queen, be sure to check out this video interview with Megan Follows:

Then to find out who will be the first victim of Catherine’s calculating strategy in protecting her son and her kingdom, be sure to tune in to the premiere of REIGN on Thursday, October 17th at 9:00 p.m. on the CW.  Heads will roll!