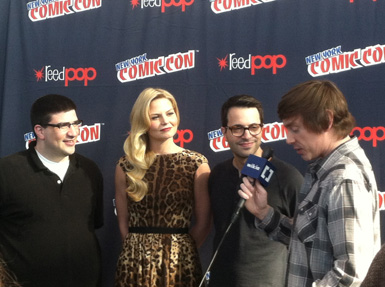 Photo and Video By: Emily Cottone

During the 2013 edition of New York City Comic Con, theTVaddict.com’s new New York correspondent Emily Cottone was lucky enough to partake in a press room with ONCE UPON A TIME star Jennifer Morrison. Morrison, who plays one of ONCE’s many heroines Emma Swan dished on the show’s often times maddening mythology and what fans can expect this season from one of television’s most enchanting dramas. See for yourself, after the jump.

Emily Cottone has been a TV addict since she her awkward middle school days when she realized the characters of Buffy the Vampire Slayer were her longest and most stable relationships. Even though she has long since managed to establish actual human connections television remains one of her very best friends. Follow her on Twitter @EmilyTalksTV.