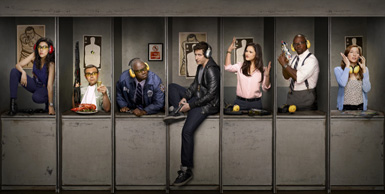 “It’s exciting to see that both critics and fans love BROOKLYN NINE-NINE as much as we do,” said Reilly. “With Andy and Andre out in front of this incredible ensemble, it feels like this show is going to be around for a long time.”

With its same-day viewing, DVR and VOD playback, and its streaming on www.Fox.com and www.Hulu.com, the series premiere of BROOKLYN NINE-NINE has drawn a total audience of more than 14.6 million. Through five telecasts, the comedy is averaging a 2.1/6 among Adults 18-49 with 4.9 million total viewers, according to Nielsen’s most current data. BROOKLYN NINE-NINE also has the third-highest concentration of upscale viewers ($100k+ HH) of any new series so far this season and has boosted the network’s averages among key male demos by +38% to +45%.

In “Halloween,” next week’s all-new episode of BROOKLYN NINE-NINE, airing Tuesday, Oct. 22 (8:30-9:00 PM ET/PT) on FOX, it’s Halloween night, a busy time of the year for any police precinct. Amy (Melissa Fumero) detests the holiday, and is not thrilled when she has to don a costume to go undercover on street patrol with Charles (Joe Lo Truglio). Back at the precinct, Jake (Andy Samberg) bets Captain Holt (Andre Braugher) that he can steal his Medal of Valor before midnight, which results in him bringing out some costumes of his own.

BROOKLYN NINE-NINE is produced by Universal Television, 3 Arts Entertainment and Fremulon. The series is created and written by Dan Goor (“Parks and Recreation,” “Late Night with Conan O’Brien”) and Michael Schur (“Parks and Recreation,” “The Office”). The series is executive-produced by Goor, Schur and David Miner (“30 Rock”). The pilot was directed by the team of Phil Lord and Chris Miller (“21 Jump Street,” “Cloudy with a Chance of Meatballs”). “Like” BROOKLYN NINE-NINE on Facebook at Facebook.com/BrooklynNineNine. Follow the series on Twitter @Brooklyn99FOX and join the discussion using #brooklyn99. See photos and videos on Instagram by following @Brooklyn99FOX.