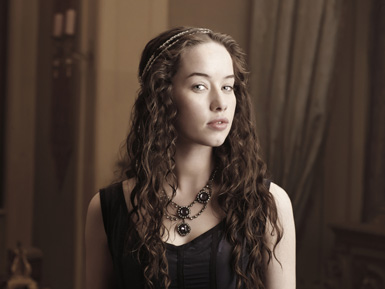 In the world of the French court during a time of delicate political alliance between France and Scotland, the act of a single person could topple a kingdom.  To aid Mary, the Queen of Scots in her transition into the French court and help watch her back are her four ladies-in-waiting.  But can one truly set aside their own loves and desires in service of one’s queen?  In press interview from the set, star Anna Popplewell candidly talked about the conflicts of head and heart for her character Lola.

How does everything that happens in the first episode effect the relationship between Lola and Mary (Adelaide Kane)?
ANNA:  I think all of these girls — especially Lola in the pilot episode — are facing this conflict between their relationship with Mary as a friend, probably the way they have grown up with her, being able to speak with her freely, and their duty to her as a queen.  That is sometimes difficult thing, especially for Lola in the pilot.  That’s her discovery and her thing certainly in their arrival in France.  And that continues and a lot of the ladies have that at different points and that is something they are struggling with.  But at the same time, I think both those relationships, the friendship with Mary and their duty to Mary, are strengthened by being thrust into this foreign court and, at points, under duress.  I think it is a very bonding thing.  Being thrown into this foreign environment.  And it is brutal and they don’t have their families and all they have is each other.

So will we start to see their relationships fracture a bit?
ANNA:  Their relationship is damaged, but not irreparably.  They all go through lots of drama with each other.  They fight and they make-up and they fight and they make-up.  I don’t think they ever forget those things, but the extremity of their situation also means that they forgive each other more quickly than they would at home.  And I think the basis of the conflict of what they go through is a bit more dramatic than most teenage girls go through, but certainly the way they fall in and out of friendship and love with each other is very young.  They are young and innocent.

How would you describe Lola separate from just being a lady-in-waiting?
ANNA:  I think she’s full of feeling.  I know you see that in the pilot, but I don’t think she’s emotional in a weak way.  I think she finds a lot of strength in that.  I think of her like one of the pre-Raphaelite women transplanted back into the 16th Century.  Very romantic, but not feeble.  That’s kind of how I see her.  It’s interesting, I’ve never worked on a series before and it’s quite interesting trying to develop a character through episodes with new events that you didn’t know would happen.  So it’s trying to construct something very full and credible that is also very flexible that can accommodate new relationships and events that you might not have foreseen or events from history that you didn’t know had happened.  So that’s challenging for me.

Will we get to see the backstory and the relationships of Mary and her ladies-in-waiting before they went to France?
ANNA:  There’s less of that and more about what is happening in France. There’s so much intrigue.  A lot of stuff is laid out in the pilot.  There’s the creepy element that needs to be followed up, there’s brewing romance and conflict, and stuff with the queen and so it’s more about following up those stories than flashbacks to Scotland.  But you do hear about what their lives were like before, a little bit.

What are Toby (Regbo) and Torrance (Coombs) like?
ANNA:  Both of them are perfectly lovely.  I’m sure the girls that watch the CW will not be disappointed by Toby and Torrance.  They are really, really lovely actors.  Everyone is focusing on their work.  Everyone is centered and does their research and does all that, but I also have never laughed more on any film set.  It’s a great group of young people with a wicked sense of humor.

How does Lola feel about her queen having two love interests?  Mary is betrothed to Francis, but now Bash is in the picture.  Will Lola kind of weigh in on “hey, follow your heart” or “hey, you’re my queen, you have to do this”?
ANNA:  I think they are all nervous about that. Less in the series, but later in the series when that becomes more apparent, I think Lola is a little bit wary about that.

Lola seems like she would be a bit outspoken and would say, “but you’re our queen, you need to do these certain things.”
ANNA:  Yeah, she does.  They are all aware of that. Aylee (Jenessa Grant) is very close to Mary and is probably the one who counsels her about that the most.  But the other characters also become aware of that.  Lola has had a couple of boyfriends in the 16th Century way and she can see that it’s going to be trouble.

Will the ladies-in-waiting start to realize that Catherine (Megan Follows) is maybe not the person to be trusted?
ANNA:  I think Catherine makes her hostility towards Mary pretty felt and they are all aware of that.  The girls are all a bit scared of Catherine.  Henry (Alan VanSprang) is the king, but Catherine is really running the French Court.  There certainly is a sense from these young women that Catherine is to be feared and revered.

Do the ladies-in-waiting have any kind of relationship with Nostradamus (Rossif Sutherland)?
ANNA:  At the moment, just a little bit. But I have no Nostradamus gossip.  They do interact with him, but there’s nothing particularly salacious.

To find out whether Mary’s ladies in waiting will stand firmly behind her as they all struggle with the French Court’s intrigue and harsh politics, be sure to tune in for the premiere of REIGN on Thursday, October 17th at 9:00 p.m. on the CW.