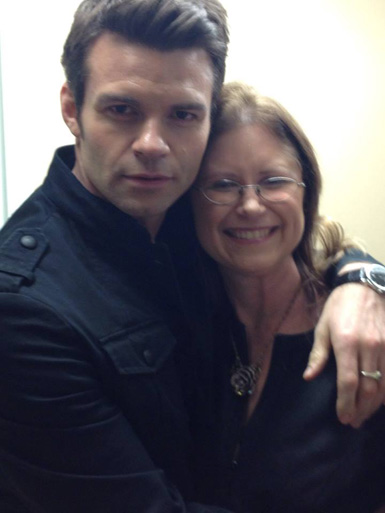 From the beginning of THE ORIGINALS, there was just a hint of perhaps more than a brotherly interest by Elijah (Daniel Gillies, pictured above with Tiffany Vogt) in Hayley (Phoebe Tonkin), the werewolf baby-momma of his indifferent brother, Klaus (Joseph Morgan).  But that hint has begun to look like more distinct romantic interest when Elijah returned from his brief time away in Marcel’s (Charles Michael Davis) coffin and actively began to hover more protectively around Hayley and unborn child.

In last week’s press conference, Executive Producer Julie Plec admitted, “There’s definitely something. Elijah, as we know, is a good protector and tends to be drawn to people in spite of himself.”  To which her co-executive producer Michael Narducci added, “What a great fantasy Elijah is to someone like Hayley? How could she not be drawn to this protective and noble man? Something she’s never seen before.”  But as a sign that their budding romance maybe thwarted, Julie further noted, “It’s very clear that [Klaus] is very territorial — that he likes what is his to remain his.  So I have a feeling that we’ll stir up a lot of conflicted emotions for him as well.”

During a special set visit coordinated and provided for courtesy of Warner Bros. Television, star Daniel Gillies gave a bit of insight into what is going on in Elijah’s head and heart as to Hayley.

How are Hayley and Elijah dealing with their feelings for each other and having Klaus in the picture?
DANIEL:  It is a very peculiar thing. It’s one of those really complicated relationships.  [Elijah] is a thousand years old. One would think that he had better sense of self-preservation.  It’s weird that he want this. Could it be any more complicated and more of a mine-field than choosing Hayley?  So I guess that is this burgeoning thing.  And it seems like the more that they try and resist it, that the more it snowballs.  It will be interesting to see where it develops to because I sense him, at the moment in the scripts, pulling away really hard — which can signify two things.  One, that he’s either really going to jump in with both feet or he’s gonna wrench himself away it.  I don’t know.  But they are sort of magnetically drawn to one another.

Phoebe had said that she thought Hayley is attracted to Elijah because she hasn’t been able to trust people a lot and he is so honorable.  What do you think Elijah sees in Hayley that he is drawn to?
DANIEL:  It’s the same thing that he was sort of drawn to in Elena (Nina Dobrev):  it’s humanity. And they both happen to be very attractive — model-like, super-human beautiful woman.  The way I justified it to myself, I think he sees that there is no greater embodiment of humanity than the pregnant girl who is kind of like doing it against the laws.  I think he’s always sort of seen this divine nobility in humanity.  That, to me, is the greatest prism through which you look at the vampire genre. It is always a great and sexy appeal of vampires as we look through this prism at mankind: what if we could live forever? And we look at it and we look people through that kind of periscope.  I think Elijah is so stuck in that. Elijah embodies that more than anyone because of this sort of calm dignity that he has — that I certainly don’t have, but which I love playing, but I don’t have that.  I’m much more erratic and fucked-up.  But he looks at life as sort of this view that humanity is precious.  When you have an infinite lifespan, as it were, and you look at this infinite shooting-star, who is still managing to have more dignity, humanity, decency and nobility than anybody could have achieved over a millennium, then I think he’s drawn to that.  And he’s drawn to her bravery and her recklessness in the face of insurmountable threats to both her own life and her child’s life.

Phoebe also said that when you and she filmed the swimming pool scene that you couldn’t stop laughing, and that some of the scenes she does with you are just funny naturally.
DANIEL:   (Laughs) People say these things about me.  I don’t know what it is or why they say this stuff.  It’s very nice.  You know what it is? I just enjoy being an actor, to be honest.  Either that or I’m entirely unprofessional.  I always feel a bubble of laughter coming to work.  I don’t know why I’m calling it work.  I just really like my job and I like connecting with people.

When Elijah ripped the hearts out of the witches and then snapping Agnes’ neck, it reminded us how brutal he can be.  Are we going to see more of that going forward?
DANIEL:  I think so.  I think it is a necessary element to the show. The problem is the mistake people make saying he is the noble one, he is the moral one. That’s a big mistake.  To me, he’s like a gangster.  He has a code when it comes to family.  He’s honorable to that code.  But by any human standards, he is an absolute fucking monster.  Like he’s a total monster.  He chopped off a guy’s head when we first met him, forced a vampire to stake himself into his own heart.  It’s malicious.  And there were innocent human beings sitting in that cafe when he picked up that thing of coins and threw it through the window.  We created this guy because at that time the show needed an antagonist and he brought that in.  Then they wanted to keep me around, so they really back-pedaled as hard as they could to make him sort of good. But I also think we shouldn’t forget the fact that he is capable of mayhem.  I definitely think that is the distinction that nobody seems to remember.  It’s a mistake.

To see how further intertwined the lives of Elijah, Klaus and Hayley become and who ultimately wins Hayley’s heart in this interesting blossoming love triangle, tune in for all new episodes of THE ORIGINALS on Tuesday nights at 8:00 p.m. on the CW. Photo Credit: Tiffany Vogt.