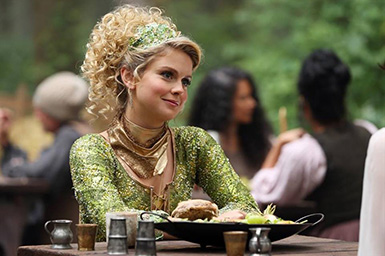 In a rare achievement for any actor, Rose McIver is currently starring in two television airing on the same night.  Sunday nights belong to Rose as she rules the screen as both Tinkerbell in ONCE UPON A TIME and as Vivian Scully in Showtime’s MASTERS OF SEX.  Fans may not even recognize her in the two roles as they are so dramatically different.  But the gifted young actress is ruling Sundays between the two roles, and she is having the time of her life.  In a recent exclusive interview, Rose talked about the fun of portraying Tinkerbell and Vivian, as well as previewing what is next for her characters on both shows.

This particular version of Tinkerbell is a little different.  For one, she doesn’t have her wings at the moment and she seems a bit cantankerous.  What is that like to play?
ROSE:  It’s a lot of fun. What I think is nice about Tinkerbell is she’s very scrappy and moody, but well-intentioned. I think everything she does comes from not a bad place.  She tried to save somebody’s life by helping Regina (Lana Parrilla) fall in love, and because of that got sorely reprimanded by the Blue Fairy. So I think that she knows that she was trying to do the right thing and feels a little like the world has been unfair to her, and I thin her being cantankerous comes from that — which I can completely understand.  She’s quite justified.  She’s lost her wings, she’s lost her identity.  The goal is to get them back.  And you’ll have to watch the show to see if that will happen or how that develops.  But I can completely understand where she’s coming from. You have to playing a character.  You have to empathize and understand why they do the things they do. I know that in the earliest creation of Tinkerbell in the story of Peter Pan and Wendy, Tinkerbell was pint-sized and was only able to have one emotion at a time.  So she could either be incredibly jealous or incredibly angry or incredibly forgiving and those things moved the thematic breaks through her.  So I tried to use a little bit of that in my performance playing Tinkerbell in ONCE UPON A TIME.  Not entirely because they like the characters to be very grounded and quite a lot more real than we have seen them in various forms.  But there’s definitely elements of Tinkerbell that are quite thematic.

What would you say has surprised you in playing this version of her?
ROSE:  I think her being so close to the Evil Queen (Lana Parrilla).  I obviously did not see that coming from the earlier stories I had read.  So her kind of being a girl’s side-kick was quite new.  Then there’s some interesting things with Hook (Colin O’Donoghue) and Pan (Robbie Kay). The relationships with both those characters is a different from the original idea in the story and fairytale.  So I think there’s a lot of surprises in store for the audience.

In the classic story, Tinkerbell was kind of in a tug-of-war between Hook and Pan.  She was aligned with Peter Pan, but Hook was always after her.  Is Tinkerbell still in the middle between the two in this story?
ROSE:  She definitely has relationships and ties to both characters in this as well. But I think they are not necessarily in the way you’re going to expect them.

Her relationship with Hook in this version seems a bit laced with history. Do they have some sort of long-standing history that we’re going to find out about?
ROSE:  We do.  We find out some of it.  I don’t know all of it yet.  That’s what is exciting about working on a show like this.  You know nothing and they surprise you with each script that you are given. So it has been development a lot more different than I was expecting and who knows what is to come.

Do you ever have an inclination like you just want to smack Pan in this particular version? He just seems like he is so insidious.
ROSE:  Yeah, I do! (Laughs)  Except Robbie Kay is a sweetheart and an absolutely lovely actor to work with.  He’s got that great thing that when he’s on screen, you resent him and you cannot believe what he’s doing. But as soon as the camera stops rolling, he’s an absolute darling and you wouldn’t wish a bad thing upon him. It’s a nice fusion.

Which character would you have liked to have had more scenes with or are hoping to have more scenes with?
ROSE:  That’s tough because I am involved with a part of the show which has a very ensemble element.  They are all banding together to work to get Henry back.  So I was actually able to work with a lot of the other cast. You know who I haven’t seen on screen and who I would love to interact with is Joanna Garcia [Swisher], who is playing Ariel.  I think that would be a lot of fun.  I really love her as a person and think she does a great job with the character.  So fingers crossed that can come up in the future.

What can you tease about what is upcoming on ONCE UPON A TIME?
ROSE:  You know what? That’s a dangerous question! You’ll see a lot more of Tinkerbell.  You’ll see her in different contexts and in different time periods.

Turning to MASTERS OF SEX, it must be interesting for you to be on two different shows airing on the same night.
ROSE:  It’s been a real blessing actually.  Both premiered on the same date, so it was an exciting weekend for me knowing that those two shows were going to air.  I have just enjoyed them both so much and in different ways.  I mean, they are obviously vastly different.  I filmed MASTERS OF SEX earlier in the year, so I wasn’t filming them simultaneously, which has actually been great.  With such different characters to jump between, it’s been nice that since I’ve been playing Tinkerbell that I’m only playing Tinkerbell and I’ve been able to embrace it.  Then Sunday nights I catch up on what I was doing earlier in the year in the 1950s in the study of sexual behavior and development.

These roles are so diametrically opposite.  How do you go about selecting your roles?
ROSE: That is really what is the attraction — just going for things that are so opposite. Something I haven’t done before.  I think every actor really craves variety.  Most actors that I know, that’s what drew them to this job in the first place: the love of being able to house a different character for a period of time and be somebody else, then change into somebody completely different.  To learn about a context and a time period and an environment.  So it’s been wonderful to play these two characters.  I was again looking for something that was along an entirely different line.

When you first saw the script for MASTERS OF SEX, what drew you to the role of Vivian?
ROSE:  My audition scene for it was the scene where she’s explaining to Haas (Nicholas D’Agosto) that she remembers him from her birthday, and I thought, “This character is really interesting.” She’s a young girl.  She’s the daughter of a man in power in the story. There’s great stakes because of that and because she’s trying to enter into a relationship with someone who is a dangerous character.  He’s a playboy.  He’s a womanizer.  And specifically I wanted to know with her belief in marriage and her belief in relationships, how much she was really behind it or whether that was something society had pushed upon her.  So I think it plays with those idea.  It’s not definitive.  It’s explorative and I really liked that.

It’s hard to describe the relationship between Vivian and Ethan.  How would you describe it having played the character?
ROSE:  I think they are a heartbreaking combination between somebody who does really have the world ahead of her.  She has not yet had an experience to steer her away from the idea that you can be with your first true love. She’s quite doe-eyed about it in some ways.  So while she does play with elements of manipulation and understanding her father’s role in Ethan Haas’ life, I think she is very out of her depth and doesn’t really deserve what she is walking into — that he is in love with another woman and is very explosive.  So it doesn’t bode well for her character.  There’s things coming up in the next couple of weeks which are very developmental for her storyline.  It’s a very heartbreaking period.  Very star-crossed lovers.

Because the show is based on real people, you’re not quite sure as you are watching it, how much  you should be rooting for them.
ROSE:  It’s a nice fusion of historical research and the whole premise of the show is obviously based around that — those studies.  The drama and the narrative does kind of stray from that in some moments.  Like my character is not part of the historical story or the biography that was written about them.  So there’s some license.  It’s nice to play a character that serves themes and ideas and still be very creative and express whatever the story needs for her to help the other characters.  There’s a license of freedom because she’s not based on a true person that is quite luxurious.

If you could give Vivian some advice, what would it be?
ROSE:  “Tread carefully. Guard your heart. You don’t know the big wide world as well as you think you do.” But also, “True insight comes from within.”  You only learn those things as you learn them.  From everyone I know that I interact with on a day to day basis, you can’t really tell someone else how to do something or how to feel. They have to go through the fire to get through to the other side.  I’m not hopeful for her, but I hope she’s stronger from what she experiences.

What was it like working with Allison Janey and Beau Bridges?
ROSE:  Those two in particular, I just have so much respect for.  With them playing Vivian’s mom and dad, I felt Vivian was from pretty good stock.  I was really fortunate.  Allison is somebody I look up to a lot as an actor, and as a woman, I think she has a really good handle on her life and on the way she works professionally. So it was incredibly nice to go to work everyday.

Any teasers on what’s upcoming for Vivian on MASTERS OF SEX?
ROSE:  Vivian is incredibly fixated on the idea of a relationship and marriage.  I think that these things are cooking and heating up to a point where something’s going to give.  It’s going to change one way or another.  In these next couple of episodes, there’s some very big changes that happen, and how she handles those will be very interesting, very telling.