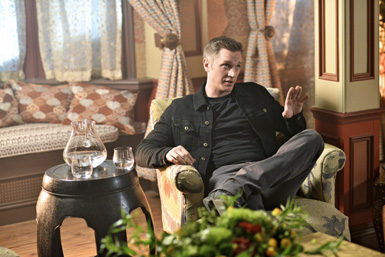 Ever since Nikita (Maggie Q) was framed for the murder of the U.S. President in the Season 3 finale, everyone has been working hard to locate the most wanted woman in the world. Everyone but Sam, that is. For Sam (formerly the beloved Owen), he is only looking out for his own best interests these days. But when a money debt arises that he cannot get himself out of, Sam remembers he knows the richest woman in the world: Alexandra Udinov (Lyndsy Fonseca). With his interest suddenly aligned, Sam reintegrates with the Dream Team to help locate Nikita and clear her name.

In a press interview from the set, star Devon Sawa talked about what Sam’s grand plan is and where Alex fits into it.

How would you describe the final 6 episodes to be like?
DEVON: It’s like a 6-episode non-stop action movie condensed into 6 episodes of TV. It’s really quick paced. It’s like a little mini-series.

So what is Sam/Owen’s role this season? We’ve heard he’s more Sam than Owen now.
DEVON: In the beginning of the season we find out that Sam is in a lot of debt and he’s apparently got in with the wrong crowd. He owes a lot of money to a guy named Braga, who is this gangster. Before he wanted nothing to do with the Super Friends, Nikita (Maggie Q). He wanted nothing to do with them anymore. And now that he needs this money, he knows where to go get it — Alex (Lyndsy Fonseca). That’s how he weasels his way back.

What is he thinking? Is he going to cook up some sort of con-man scheme to get the money out of Alex?
DEVON: Exactly. He’s up to no good.

Does seduction play a role in that?
DEVON: Something like that. (Laughs)

So we’re looking forward to some of the Alex/Sam kind of thing going on?
DEVON: In the beginning, yeah. He befriends Alex and he kind of follows her around hoping to get that money out of her somehow. But eventually she starts bringing the good in him back to the top.

So when Sam rejoins the team, is he just in it for the money or do those feelings starting to come to the surface mean that he has a desire to help them?
DEVON: Up until Episode 4 really, he’s only in it for the money. He’s only thinking about himself. He wants to get rid of them again. He doesn’t want to be around these people. He’s in it for the money to pay off this gangster so he doesn’t break his legs. By the middle of Episode 4, the feelings start coming up and he starts growing a conscience and he’s conflicted. Then we’ll see where it goes from there.

Will there be repercussions from when Sam shot the black box?
DEVON: Yeah, the Alex scene in the 320 and he was talking to her. She kind of brought that glimmer of what Owen used to be like out — a guy with a little more heart. That’s what drove him to go back. Somewhere he was driving along and he decided, “You know, I’m just going to go destroy the black box. What’s it going to hurt? It’s not going to effect me.” That’s the first time we saw that, and that’s going to come in and out as we go through first 4-5 episodes.

Is there still glimpses of Owen that we all knew in there, or is it all just Sam now?
DEVON: They’re both the same guy and I don’t think he’s ever going to go quite back to Owen, ’cause Owen was a softie, more of a lap-dog kind of character. He was a badass. There will be more Owen. He’ll come out more by the end. Not fully, but a bit more Owen.

What surprised you the most going into these last 6 episodes?
DEVON: I thought they would bring Owen back right away ’cause there was such a cry from fans. That’s all I hear: “We don’t like Sam.” And I’m like, “What do you want me to do?!” And they really didn’t bring Owen back. But Sam is a lot of fun to play. The surprising thing is that they are waiting so long to bring any of Owen back.

How do you physically differentiate between the two characters, because it feels like they are entirely different even though they are portrayed by the same actor?
DEVON: It’s quite simple: Owen’s not evil and Sam is. I couldn’t even explain it. The facial expression of Sam is just kind of slick Clint Eastwood kind of feel and Owen is just an extension of myself a little bit — kind of goofy and happy.

Are you a softie?
DEVON: I hope not! But maybe. (Laughs)

How soon are we going to see Sam in the last 6 episodes?
DEVON: I’m in every episode. But Episode 1, I come in at the very end for good reasons. So Sam’s story starts at the end for Episode 1. Then Sam and Alex become a storyline.

Did that excite you to have a storyline pairing this season?
DEVON: Love Lynsdy! Lyndsy’s storyline is the best this season so far. She’s just a lot of fun to work with. A lot of fun we have on set.

For the final episodes is it high-octane, go-go-go?
DEVON: Yeah, it’s longer weeks, longer hours. I overheard some of the Comic-Con stuff that Craig [Silverstein] said: “We don’t need more than six. We’re going to get it all in.” And I was like, “Yeah, right. We’re not going to get it all in.” And he stuffed it all in. Every time something happens, we’re like, “Oh my god!” It just keeps going. Like something is constantly happening. Someone’s always constantly dying.

Shane [West] teased the doppelgängers and said there might be more dopplegangers out there. Is that something that comes into play in Sam’s storyline?
DEVON: No, there’s none of that in the Alex-Sam storyline.

How does Sam feel about The Shop. Does he even care about that?
DEVON: The Shop doesn’t effect him. It doesn’t come into his story because all Sam cares about is money. It’s the only reason he’s hanging around Alex and Alex is off on her own doing something. Sam’s just kind of tagging along with her for the right time to snag the money and pay off his debt and then be done with them.

Does Sam get kind of invested in clearing his own name so he can have a different kind of life?
DEVON: (Laughs) Yeah, that’s the spinoff series.

Where would you like Sam’s storyline to end?
DEVON: I want him to be a better guy. I envision the Sam as the Jack Nicholson character in “As Good As It Gets” where he says, “You make me want to be a better man.” ‘Cause he’s like this crazy strange guy, but Alex brings out the good in him. So hopefully the good is all revealed by the end.

So you’re looking for the happy medium between Sam and Owen?
DEVON: That’s what I want to find. The not so goof Owen — ’cause Owen had a problem with girls. He was just a straight assassin. Anything else, he had a real problem with. Then Sam is just like arrogant and kind of into himself. So hopefully we can find somewhere down the middle.

Assuming some genuine feelings start to develop between Sam and Alex, what does he see in her that starts to break that ice a little?
DEVON: She brings out the good in him. She’s the only one that’s been able to do that. I don’t know yet, because we haven’t gotten there. I know they are teasing and it could potentially go there in the 6th episode. But we’ll have to see what happens.

So Sam’s drawn to Alex’s goodness then?
DEVON: Yeah. She says all the right things. She’s also playing two characters. She’s this rich girl and was a Division agent, so they are kind of like similar. And the whole butterfly thing, and all that. So we’ll see.

He appreciates the duality in her and he understands because he has had that kind of double-life himself.
DEVON: Exactly.

To see how successfully Sam is at wooing the dubious Alex, be sure to tune in for the climatic conclusion of NIKITA’s final season, which begins Friday, November 22nd at 9:00 p.m. on the CW. All six of the final episodes will air consecutively on Friday nights, with the series finale scheduled to air on Friday, December 27th.