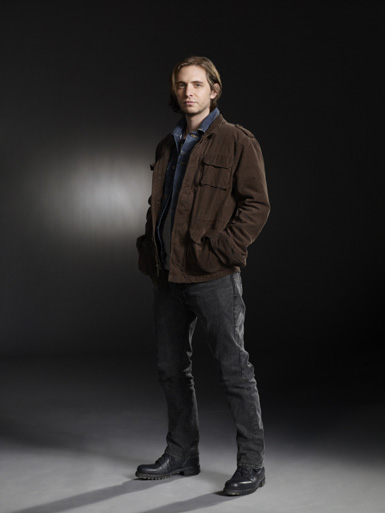 In the spy drama NIKITA, there is never any shortage of danger. So it is imperative that someone always has your back, both in the field and from the safety of a computer desk to guide our heroes through the labyrinths and minefields they encounter. In the NIKITA world, two of those key agents are Seymour Birkoff (Aaron Stanford) and Sonya (Lyndie Greenwood). Without their lightning fast keystrokes to save the day, Nikita, Michael, Alex and Owen/Sam would have been stuck many, many times in the field. So every good field agent needs a backup behind the keyboard as well.

In press interviews from the set of NIKITA, co-stars Aaron Stanford and Lyndie Greenwood tried to carefully tease what the future holds for their characters, Birkhoff and Sonya, as the final season races towards its explosive and deadly finale.

So what’s Birkhoff up to in the final 6 episodes? What’s his game plan?
AARON: Well, when the final season begins, they have to find Nikita (Maggie Q). So that’s the whole plan at that point. That’s the mission. Then once they do find her, it takes off from there and it’s very unbelievable. I couldn’t really sum it up. We also get into Birkhoff’s origin story, which I’ve been waiting to do for awhile and a lot of fans have been wanting to see. It’s absolutely not what anyone is expecting for an origin story. It’s not where you think he came from. It’s a surprising and satisfying reveal.

Will it also be satisfying whatever goes down between Birkhoff and Amanda (Melinda Clarke)?
AARON: I don’t know. We haven’t had a face-off this season yet. I would love to see that after the animosity they’ve had and the famous torture sequence. She’s a nasty piece of work.

How does Birkhoff feel about Sam (Devon Sawa) coming back into the fold? It seems like he would not trust him very much.
AARON: (Laughs) Birkhoff has several sideways comments to make about that. But I haven’t had a lot of scenes with Devon either.

So we see Sonya more in the action then for Season 4?
LYNDIE: Yeah, Sonya’s out there more. Though she’s more of mental ass-kicker, the brains. She’s more of a strategist.

Is she working with Birkhoff to develop a strategy to get Nikita back and come up with a plan to clear their names?
LYNDIE: The team is looking out for Nikita, for sure. But Sonya and Alex (Lyndsy Fonseca) are kind of a team this next season. Girl power! So that’s been really fun. It’s been really great working with Lyndsy, of course. I like that duo and I wish there were time to explore that friendship between Alex and Sonya. I think it’s a really lovely thing.

In the final 6 episodes, is the team more on the run or have they found a safe-haven?
LYNDIE: Both. They have a temporary safe-haven and we’ll see what the end brings. But they are very much trying to solve all of these problems from a place that is not really their own. They do that from a temporary location.

Will we learn more about Sonya?
LYNDIE: Unfortunately, not really. I was actually really nostalgic the other day about it because you never really get to know her. You never do. And that’s it, the character’s gone. Sonya was really a character that was only supposed to be around for 2 to 5 episodes, and then she kind of stuck around. It was good for Birkhoff to have another angle to his character as well.

How does it feel to be coming to an end of this long, amazing journey on NIKITA?
LYNDIE: It’s bittersweet, I guess. It’s been really, really great working with everybody and seeing this character grow a bit. She started with one-word answers and now she’s had some really lovely scenes. I’m actually working on another show right now (SLEEPY HOLLOW), so I’m excited to go off and do that. It’s a really different character. But this has been great. I’m from Toronto, so it’s so nice to be able to work with all these people in my hometown.

To see if Birkhoff and Soyna do actually get a chance at happily ever after in the final 6 episodes of NIKITA, be sure to tune in on Friday, November 22nd for the first of the last six episodes airing Friday nights straight through to December 27th at 9:00 p.m. on the CW.