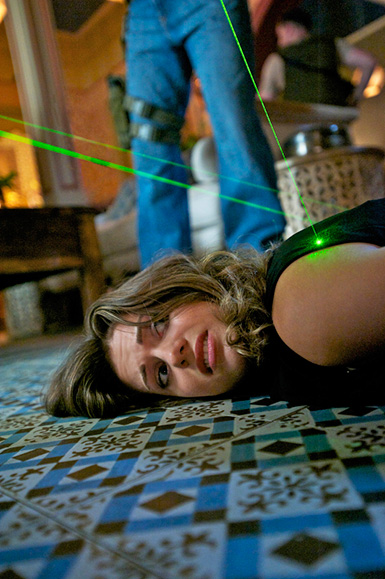 For its final season, the CW series NIKITA is racing no holds barred to its epic series finale.  The series returned last week with the episode “Wanted,” as Nikita (Maggie Q) tried to return and clear her name by enlisting the aid of a sympathetic news reporter Dale Gordon (Todd Grinnell).  But that did not go as planned at all – at least not for Nikita.  It went exactly as planned for Amanda (Melinda Clarke).  Nikita was implicated in yet another high profile and public death as a massive explosion went off claiming the life of the Gordon and all the evidence Nikita had given him.  The culprit aiding Amanda in this nefarious execution turned out to be none other than FBI Director Matthew Graham (Alex Carter).  That’s right, another double had been revealed.

After the searing surprise of the third season finale where Nikita watched in horror as the woman she thought was the U.S. President shot herself right in front of her eyes, viewers say moments later that Amanda had the real President under lock and key.  Something was clearly going on with doppelgangers and doubles.  Amanda had pulled off a coup of a lifetime, by making the entire world think the U.S. President had been killed by Nikita.

But with Nikita nearly reunited with her crack Division team and friends, Michael (Shane West), Birkhoff (Aaron Stanford) and Ryan (Noah Bean) that little dirty secret of Amanda’s is about to be revealed.  High ranking U.S. government officials are acting completely out of character:  the President kills herself and the FBI Director blows up an informant.  So while viewers are fully aware of the doubles replacing the real people, Nikita and Co. are just a step behind which they will rectify shortly.  In this week’s episode “Dead or Alive,” the noose is tightening around Nikita.  But with Michael and Birkhoff desperate to locate her before the FBI or anyone can, we are placing bets that they find Nikita first.  With one vital piece of information from Alex, Ryan and Nikita are sure to figure out Amanda’s double-replacement plan in very short time as well.

Speaking of Alex (Lyndsy Fonseca), when we last saw her, she was having an unexpected reunion of sorts with Sam (Devon Sawa).  Leave it to Sam to find a way to ruffle everyone’s feathers by trying to integrate himself back with his former teammates.  Without the natural charm of his Owen persona to aid him, Sam is going to have a tough go earning everyone’s trust and respect again.  Yet Sam seems determined to stick around, no matter how many guns and bullets are aimed his way.  Teaming Sam with Alex and Sonya (Lyndie Greenwood) proves to be a fun way to tie the two separate hero teams together despite the geographic distances as Alex, Sonya and Sam are busy in Mumbai unraveling a thread that ties directly back to Amanda and The Shop with an intricate human-trafficking scheme.

With another double about to be revealed, Nikita is bound and determined to expose Amanda’s plan in a very public way.  If only Nikita knew that Amanda has contingency plans upon contingency plans in place and each step Nikita takes is bound to cost another life.  The real test will be whether Nikita has the strength to go through with her plan, when Amanda will certainly sacrifice another life if she does.  How many innocent lives will be lost one-by-one as Nikita presses forward with her plan to take down Amanda and The Shop?  And will it put her own friends in harm’s way in the process?

The other question sure to tickle the brain is:  who else could be a double?  Could someone close to Nikita be a doppelganger/replacement?

There are going to be some shocking surprises in this next episode of NIKITA and you will not want to miss out on one second of it.  The final moments will make your jaw drop.  So be sure to tune in this Friday, November 29th at 9:00 p.m. for yet another gripping episode as the final six episodes of the 4th season play out.  (Look for the series finale of NIKITA to air on December 27th.)