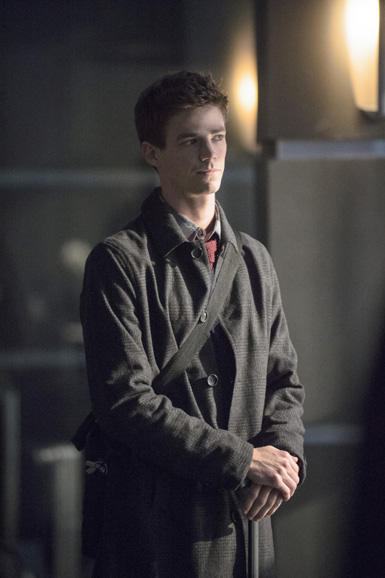 When we last left off with our heroes of Starling City, two stunning events had just occurred: (1) Moira Queen (Susanna Thompson) was acquitted for her part in the Reckoning, and (2) Malcolm Merlyn (John Barrowman) returned announcing that he was the father of Thea Queen. It is hard to say which moment caused fans jaws to drop harder, but certainly many were left stunned by these sudden shocking events. Even Oliver Queen (Stephen Amell) was surprised to see his mother escape the vengeful wrath of justice. But apparently that was all Malcolm’s doing – he pulled a few strings to ensure that Moira was freed.

But as this next episode “The Scientist” reveals, Moira did not get away completely free: there is the court of public opinion, and they still hold her accountable for her dubious actions. Unfortunately, Oliver thinks that the perfect way to woo back Moira’s social status and the hearts and minds of those who think she got away with murder is to throw a party. That’s what Queens do – they throw a party in the face of desperation and social ostracism. Yet even Isabel Rochev (Summer Glau) knows that a party may be just another occasion for Starling City to turn their backs on the woman who aligned with a madman.

Simultaneously, a party is the last thing Moira needs to worry about with Malcolm back from his faked-death and threatening to tell Thea (Willa Holland) the truth about her lineage unless Moira does. Just when the relationship between Moira and Thea had finally reached a good place and there is Malcolm digging up the past and ready to destroy all the memories Thea holds dear.

So with family matters weighing heavy on Moira and Malcolm’s minds, one is left to wonder what Oliver is up to. Well, as luck would have it, there has been a break-in at one of the Queen Consolidated warehouses and something interesting has been taken. Apparently The Count (Seth Gabel) was not the only one interested in mixing chemicals and concocting the perfect serum for his own ends. Alderman Sebastian Blood (Kevin Alejandro) has been playing with a few toxins of his own – one that mirrors the serum that Dr. Ivo (Dylan Ivo) and everyone was in search of back on the island.

The break-in not only reveals a big clue or two about what is really going on with a new criminal mastermind in Starling City, it introduces a welcome new face: Barry Allen (Grant Gustin). Heralded as the new hero to help in the fight against crime, it will be revealed just who Barry is and what he is really doing in Starling City. But he is certain to turn more than a few heads as he claims attention just by walking into a room. Felicity (Emily Bett Rickards) certainly notices every move he makes and Oliver notices her noticing. There’s plenty for fans to be curious about with this new character in play and capturing so much attention. Suffice it to say, fans will be clamoring for more stories with Barry. His unique skills and passion for justice melds nicely with the already established superhero club, and he may just be the person they need when lives are on the line.

This next episode delivers on the whispers of a new hero in town and will send hearts fluttering. Definitely do not miss this week’s episode “The Scientist” on Wednesday, December 4th at 8PM on The CW (CTV in Canada). The life of someone we hold dear will be in the crosshairs and it will leave you gasping when you see who it is!