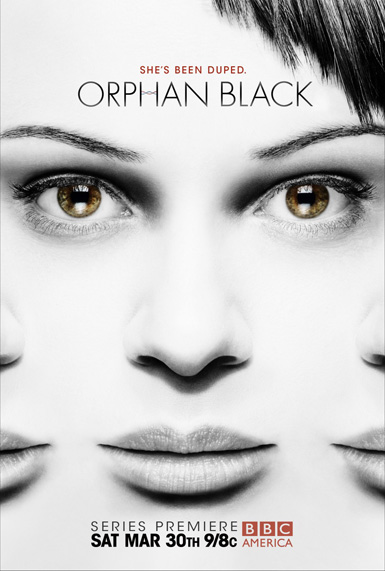 As always at the end of another year, it’s in our nature to look back and reflect on what we’ve learned over that year. What did we learn when it came to TV in 2013? It’s all about the ladies! From the grungy to the corsets, women in TV kicked ass this year and we’re bringing them straight to you in this rundown of the Top 10 Best Shows of 2013.

Now, not all of these shows are female-driven in concept but probably have a badass mama somewhere in the wings. What they all do have in common is great fun and even better writing. If shows like these are an indicator of what’s to come in 2014, I say keep them coming!

ORPHAN BLACK (BBC America)
#CloneClubFTW! What was just supposed to be a sleepy little sci-fi-ish mystery over on BBCAmerica is really one of the most compelling can’t-miss-shows. Unraveling just how far the clone conspiracy goes is just the start. But Tatiana Maslany is the driving force behind why this show works. She plays ten, count them ten, separate roles as her own clone and does it masterfully. Thank the TV Gods that the HFPA finally noticed and Tatiana was nominated for a Golden Globe.

SLEEPY HOLLOW (FOX)
It really is the year of historical(-ish) dramas. SLEEPY HOLLOW liberally takes Revolutionary War America and cleverly weaves in what our Founding Fathers were REALLY up to, namely battling demons, witches and Apocalyptic Horsemen. Tom Mison plays a dreamy Ichabod but what’s really fun is Nicole Beharie, who plays Abbie and is Ichabod’s guide to the modern world. Savvy and tough, Abbie is down in the trenches with Ichabod and the chemistry between the two sizzles.

REIGN (CW)
“Long may she reign” says the intro to CW’s historical drama REIGN and I have to agree. Playing on the story of Mary, Queen of Scots, REIGN is hits all the right notes-scandal, betrayed alliances, steamy courtly sex, and the clothes! But most fun to watch is newcomer Adelaide Kane, who plays Mary and manages to pull off playing a politically-minded queen and a 15 year old girl in love for the first time.

THE ORIGINALS/THE VAMPIRE DIARIES (CW)
Tasty, tasty, tasty. Yes, I lumped the CW’s two vampire series together, but really, they still belong together. Mainly, eye candy and delicious evil plots keep these two on the top of the list. There’s no end to the amount of legend or myth that keep these plots twisting but really, do we want there to be? I’m all about guilty pleasures.

THE BIG BANG THEORY (CBS)
The show continues to be one of the best sitcoms. We love the geek culture references and the awkward but unrelenting Sheldon. But really what has made the show shine are the talents of Mayim Bialik as Amy Farrah Fowler and Melissa Rauch as Bernadette, proving that nerd girls rule!

ARROW (CW)
If the first season of ARROW was like a toddler learning to walk, the second season is like that toddler becoming Chuck Norris armed with ninja stars and a vendetta to execute. ARROW this season has been a high octane, dig-your-nails-in ride. Breaking open some of the ARROW comic book lore, ARROW isn’t showing any signs of slowing down. And who doesn’t love nerdy Felicity and all of her quips, which add much needed levity to Oliver’s somber take on the world.

ORANGE IS THE NEW BLACK (Netflix)
Imprisoned for a crime a decade earlier, Piper is transplanted from suburban hipster life to prison life. Who she’ll be when she’s done her time is up to her. Driven by a fierce female cast, ORANGE IS THE NEW BLACK doesn’t just try to compare life on the inside to life on the outside. It takes a darkly funny and unrelenting look at who these women are because of the choices they’ve made and makes the viewer wonder if we really know ourselves.

PARKS & RECREATION (NBC)
Another one of NBC’s under-appreciated comedies, this season PARKS & REC gave plucky and ambitious Leslie Knope her dream of winning a city council seat and let her fail miserably at it. But it’s hilarious to watch Leslie pick herself back up, railroad against her arch nemesis Jamm and still have time whip up some waffles for a good Friend Day.

VIKINGS (History Channel)
Some (meaning, me) have called it GAME OF THRONES without the dragons and bickering aristocratic families. Part action-adventure, part-history, all parts savage and fun, VIKINGS is really better than the GAME OF THRONES comparisons.

GAME OF THRONES (HBO)
While George R.R. Martin’s book series can’t always be labeled as “female character-friendly,” the team at HBO has done a good job making the ladies just as strong as the men. Give me Dany over a feuding Baratheon any day, dragons or not. But what really stood out this year was THAT wedding. You know, the Red Wedding that left viewers open-mouthed for days. Even those of us who knew it was coming still cried in anguish when Cat realized what was happening.