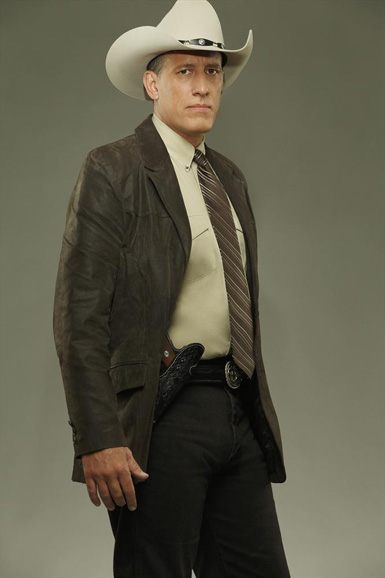 Giddy to be co-staring in his first series regular television role, Alex Fernandez cannot help beaming through his scenes on KILLER WOMEN. Fortunately, he is portraying Lt. Luis Zea, the easy-going boss of Molly Parker (Tricia Helfer), the first female Texas Ranger assigned to track down women killers on the run. Perhaps gleeful that his star protégé is making him look so good, Lt. Zea has every reason to smile. Hand-picked to helm this special branch, Molly uses both her training and innate intuition in pursuing women who were driven to kill.

In an exclusive video interview, co-star Alex Fernandez happily shared what he loves about working on KILLER WOMEN, the fun amount of humor that is woven into the stories, and how cool it is to be the guy wearing the hat, the badge and the gun:

KILLER WOMEN is not so much a show about who-dunnit, as it is about the why-dunnit. As such, Lt. Zea is a forward-thinking Texas Ranger who knows that solving crimes is not about just catching a killer, but proving why they did it. It is to his credit that he was willing to stick his neck out and promote an officer from outside the Texas Rangers to get the job done. In a modern world where men and women kill equally, it is great to see that women can be seen as an effective tool in fighting crime.

Beginning January 7th, over the course of eight episodes, KILLER WOMEN showcases one woman a week before unveiling an even bigger mystery in the finale. To see what explosive stories and action KILLER WOMEN has in store, be sure to tune in Tuesday nights, starting January 7th, at 10:00 p.m. on ABC.