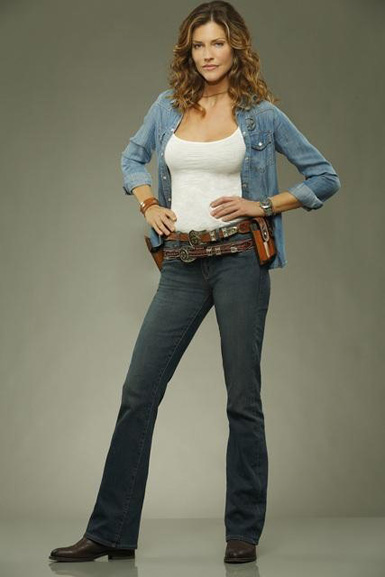 Offering a twist on the normal murder-mystery type of TV shows, KILLER WOMEN is described by executive producer Hannah Shakespeare as a why-dunnit, opposed to the typical who-dunnit. She clarified that it is a “psychological examination of why women snap.” But that is a simple way of describing a television show that offers action that would rival a blockbuster movie. KILLER WOMEN may showcase women driven to kill, but the thrill of the chase is certainly a big element of the series.

In an exclusive video interview, executive producer Hannah Shakespeare talked about the challenges of casting for such a complex and physically-demanding role, how tricky it is reining in her cast from doing the more dangerous stunts, and what will be Molly’s ultimate challenge as the series introduces a big mystery:

For those who take notice, the cast of KILLER WOMEN are all remarkably tall. Hannah cast taller actors deliberately as she wanted the characters to have a certain swagger to them. She wanted them to have a gleam in their eye and a strong sympathetic side.

Tracking criminals is not all about high-speed car chases and slapping on handcuffs, it is about understanding the criminal mind and what motivates a person to kill. Hannah felt for Molly Parker, the Texas Ranger given the special assignment of tracking female killers, that it was important that Molly exude a natural kindness. Fortunately, Tricia Helfer embodies a sense of profoundness with kindness and that was key for the role. She also happily noted that Tricia is someone that both male and female viewers empathize with, while still being a believable bad-ass. Tricia can rock a Stetson and pull a gun and people believe it.

To see what kinds of crazy adventures, Molly Parker gets into as she diligently pursues criminals on the run, be sure to tune in for the eight episodes of KILLER WOMEN airing Tuesday nights, starting January 7th, at 10:00 p.m. on ABC.