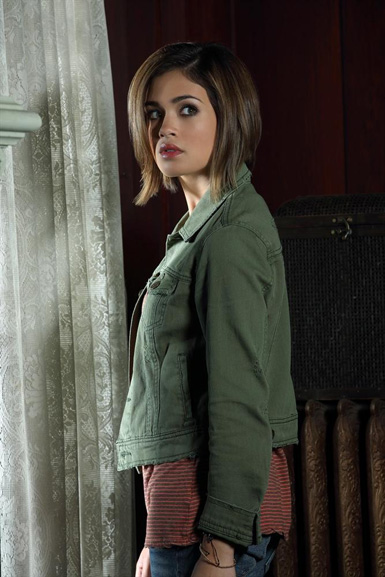 It is not every day that a young actress gets to star in a television series as a ghost. But in the PRETTY LITTLE LIARS spinoff series RAVENSWOOD, Nicole Gale Anderson landed the plum role of Miranda, who found herself in an otherworldly predicament. During a press interview at the Warner Bros. Mondo International Press Tour, Nicole talked about everything she loves about the show, the challenges of portraying a ghost amongst the living, and the fun being part of the PRETTY LITTLE LIARS universe.

Can you talk a bit about your character and your role in the show?
NICOLE: I play Miranda Collins. She’s a 17?year?old girl that’s been in and out of foster homes for most of her life. So when she meets Caleb (Tyler Blackburn) on the bus on the way to Ravenswood, they really become fast friends because of that element that they have in common. So because of her past experiences, she’s really strong and confident and really spunky and witty, and she likes to find the humor in non-humorous situations. So I think as dark as the show is, she brings a little bit of a lightness to that the equation.

What do you like about your character, and what is your favorite moment so far?
NICOLE: My favorite thing about my character is the fact that she’s a really loyal friend. She’s the character that will bend over backwards and put herself in the line of fire for the other people that she cares about. And one of my favorite scenes to shoot would probably be later on in — I believe it’s the seventh or eighth ?? but I got to do a stunt with one of the stuntmen and I got to kind of whack him on the head with a lamp and sparks flew everywhere. So I kind of got to feel like a supercool chick while doing it.

How much you identify with your character? And on a personal level, do you relate to the show?
NICOLE: Miranda and I, I think, personally are quite different. I feel like she’s a bit rougher around the edges, and kind of more punky and a lot more sarcastic, I would say. But I think that there’s a goodness in her. And like I said, she’s a very loyal person, which I’d say we’d have that in common. And I’ve definitely had a lot of fun playing her, especially because she is so different than who I am as a person. To be able to put myself into someone else’s shoes, it’s been fun.

How was it to shoot the scene where Miranda finds herself in front of her own tombstone?
NICOLE: We had a lot of fun with that. It was so fun, especially because we got to do the photo shoot for that image. So to be able to dress up and become the original Miranda was a lot of fun. And you get to expect a couple of flashbacks within the season where you find out more about the mystery revolving around the doppelgangers. So yeah, it was one of my first couple of days working on PRETTY LITTLE LIARS and getting to know Tyler and Ashley (Benson). So we had fun with it.

Since your character plays a ghost, what is kind of the challenge of being in scenes with all these actors who may not be reacting to your character?
NICOLE: It’s been a lot of fun. I feel like she’s kind of that mediator where she gets to spy on a lot of people and report back to the other characters. And, it being a supernatural show, we naturally have to react to a lot of things that aren’t even really there. So that’s also been another thing to have to get used to, is pretending to react to some other ghost or something that isn’t really there. But I think Miranda ?? even though she is a ghost — I think sometimes she almost forgets it. You know what I mean? She still is Miranda.

How did all the girls receive you when you came? How is that dynamic in the shooting the show PRETTY LITTLE LIARS?
NICOLE: Oh, they were so lovely. Actually, I’ve known Lucy (Hale) since I was 16. So it was good to see her again and kind of see her in her element and be on the show. And I mostly worked with Tyler and Ashley on the Halloween episode. So it was really nice. They were so sweet and so welcoming. And it couldn’t have been a better group to be a part of, especially them shooting for three, four seasons, and it was a well?oiled machine. It was short hours and great, talented people to work with.

How much your life changed after just being in a show with having such a big following?
NICOLE: As cliche as it sounds, it really was a dream come true. I’ve been doing this since I was a teenager. So to finally be a part of a project that I’m really proud to be a part of and to work with such successful people as Marlene (King) and Joe (Dougherty) and Oliver (Goldstick), they’ve really figured out their demographic and the niche that they play into. So it’s really exciting to be a part of the family.

Do enjoy watching TV shows on Blu?ray, DVD, or digital?
NICOLE: Oh, yeah, definitely. I’m a huge Netflix fan, so I find myself losing a lot of hours streaming on that website. A lot of shows are just so good at leaving off on cliffhangers, where you have to know what’s happening next, obviously. I tend to just at least watch the next 10 minutes if I have to go to bed. I’m like, “I just have to see what happens after this moment before going to bed.” And I think that’s what’s just so nice about having a couple of episodes to watch right in a row. It’s just to at least fuel that little bit of addiction that you kind of create with a new television show.

The show has a lot of followers in social media. Are you good following what’s going on with the fans talking about the show?
NICOLE: I definitely love hopping onto Twitter and Instagram and reading what they have to say and seeing what they think about the show, especially after it airs, and hearing what their favorite moments were of that episode. And I try to keep up with tweeting. Sometimes I fall off the bandwagon a little bit, but I definitely like keeping in touch with fans, especially it being on an international level. Hearing that there’s fans from Germany or Spain and they’ve heard about RAVENSWOOD, it’s just kind of mind?boggling, but really exciting.