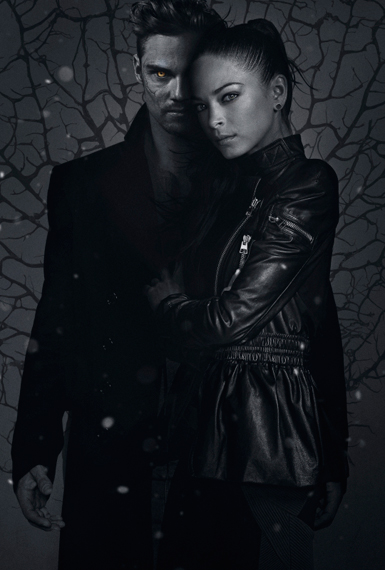 Right in the middle of their second season, BEAUTY AND THE BEAST closed the book on a major storyline: hunting the beasts created by Muirfield. It was supposed to be the end of the beast hunts, and it would allow Vincent (Jay Ryan) and Catherine (Kristin Kreuk) a chance to rediscover what they mean to each since Vincent’s mind was wiped of his memories.

Yet with the noose closing in as Vincent checked off name after name on his hit-list, a surprising discovery was made: Curt Windsor’s (Paul Johansson) daughter Tori (Amber Skye Noyes) is a beast. It has not yet been revealed how Tori is a beast — was she born that way or was she created? And with her father dead, those answers seem to have died with him.

But in the upcoming episode “Don’t Die On Me,” the mystery of Tori and her father’s beastly origins may be uncovered – and another interested-party shall be revealed. Just because Muirfield is gone, it does not mean that there are not others out there who knew of the Muirfield experiments and who may want to get their hands on the technology — and they seem to think that Tori and her father’s legacy just may hold that key.

What does this mean for Vincent and Catherine? Nothing good. Their happily-ever-after ending remains as elusive as ever. The raw animal attraction that sparks whenever Vincent and Tori are together is hard enough to explain and deal with, but finding out that the hunt is not over is even worse.

The episode also opens with a much more human problem to deal with: Catherine has to explain why a bullet from a police-issued gun was found at the scene of the car accident. It prompts an internal affairs investigation and questions that Catherine has no answers for. With Vincent angry from being shot, it is up to Gabe (Sendhil Ramamurthy) to come to Catherine’s rescue with her career on the line.

Then while Vincent may be a doctor and a beast that does not make him wholly immune from a gunshot. With his injury worse than expected and Vincent stubbornly wanting to avoid hospitals and have his identity exposed, it falls on Tori and J.T. (Austin Basis) to try to patch him up. Unfortunately for J.T., getting all the necessary medical supplies gets him in some trouble and it is Tess (Nina Lisandrello) to the rescue for him.

No matter where they turn, they all seem to be getting into trouble in this next episode. Even Tori cannot seem to keep out of the spotlight as she is blackmailed into meeting with people wanting her to sign over one of her father’s properties.

Try as she might, Cat cannot turn her back on Vincent and Tori. Both need her help and Cat’s protective instincts push her to help even when she feels angry and betrayed by Vincent’s decision to chose his beast life over a human life with her. They have a lot to discuss and neither feels inclined to yield on their position. Vincent feels justifiably angry with Cat’s dad for having stolen his life and memories against his will; but Cat feels that it is wrong to kill her father when incarceration for his crimes should be adequate punishment. Yet, for Vincent, that punishment is not fitting with the crimes against humanity that Cat’s father subject on him – not to mention forcing Vincent to be a government assassin.

There are not just a battle of wills and hurt feelings between Cat and Vincent; there is the fundamental difference in that Vincent feels and reacts more like a beast without his memories of his 10-year struggle fighting his beastly instincts. He has not yet learned how hard he fought against being a beast. He only remembers that he was turned into one and encouraged to use those instincts with sanction and approval by the government. Without that controlled conditioning and recall of his desire to not be controlled by the beast instincts, Vincent feels that he beast-side is normal and is hurt that Catherine does not accept that within him. He also feels betrayed that she seems to have chosen to protect her father, the man who inflicted such pain on Vincent, when she shot Vincent.

Yet he also does not see that Cat is just as hurt that Vincent is not rejecting his inner-beast and seems to be shedding more and more of his humanity. She wants him to want to be human again.

So with Cat and Vincent struggling to understand each other and each hurt by the other’s choices, they have a long road to finding their happy-ending again. At this time, it feels insurmountable. Vincent does not want to change and does not remember the burning love he felt for Cat. But one day, his memory will come back and those old desires will burn bright again. Vincent seems to understand that the animal attraction he feels for Tori is not natural, and he knows in the back of his mind that there was much deeper relationship with Cat; but until he feels that again, he is lost to Cat.

The good news is that Cat really isn’t the type of person to give up on someone she loves. She may want time away from Vincent to allow him the time he needs to figure out what he truly wants; but Cat is not a quitter. Her heart belongs to Vincent. Somehow, someway her heart knew she found her soul-mate all those years ago when he first rescued her. It was the same heart that leapt for joy when she found him again last year. What the heart wants, the heart wants. Cat’s heart belongs to Vincent, no matter what her head tries to tell her. And the same is true of Vincent. He may not remember that love yet, but he feels it. It pulls him to Cat even as she pushes him away or as he tries to stay away.

In “Don’t Die on Me,” we see the difficulties ahead, but we also sense the hope for Cat and Vincent – even at death’s door, Vincent will always rush to Cat’s side when she needs him. So with a new mystery and threat looming, Vincent and Cat are going to need each other, and that will help remind them of the love that burns bright in their hearts. It only takes one spark. The show is called BEAUTY AND THE BEAST after all, their love is forever.