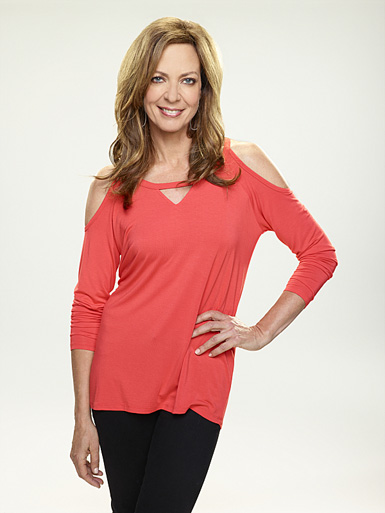 In the CBS comedy MOM, Allison Janney has been presented with the role of a lifetime portraying a mother, grandmother, and recovering alcoholic who is now battling breast cancer. Credit goes to Chuck Lorre for knowing that Allison was the perfect actor for the part. During a press interview at the Warner Bros. Mondo International Press Tour, Allison shared what she loves about this fascinating role and the unexpected joy of working with a live audience.

What do you like about your character Bonnie?
ALLISON: I like how unapologetic she is. I also like how unencumbered by the reality of her own situation she is. And I like how she does a positive spin on everything, even her awful parenting skills; that she’s ?? she sees herself as someone who is a good mother. I mean, in terms of what she was dealt with, she provided, and she did the best she could. And you gotta love her. Though it’s infuriating for her daughter to see her not sort of taking responsibility and owning up for the bad parenting choices she made. But as the series goes on, I think you’ll see her becoming a little more real and taking responsibility for her actions that weren’t so great.

How liberating is it to go through those emotional extremes with Bonnie?
ALLISON: I love all the levels of emotion that I’m getting to go to on ?? in this show and being encouraged to, like in the episode where Bonnie falls off the wagon. And that was a rather painful, real monologue that I had in that impromptu AA meeting with Octavia Spencer’s character and Mimi Kennedy’s character. I got to explore a very dark side of Bonnie where she showed her underbelly a little bit, showed her pain. And I went to a very real place emotionally there and then, one line later, was making a joke or laughing. I love that sort of fluidity between the darker emotions and the comedy. I think that’s life and very honest, and I’m loving all the highs and lows and mixing them all up.

Because you film before a live audience, are you always aware of it?
ALLISON: Yeah, Anna and I both. I was surprised at how terrified I was on those live tape nights. I got really, really nervous. I get nervous for everything I do. I just do. And it surprised me because I thought, “Come on now. This is what? The reason why you did this is because you wanted to perform in front of a live audience.” And I quickly learned that it’s a gift to have them there because when they laugh, it sort of opens me up as an actress. I feel it gives me an incredible confidence. And I know, from my experience in the theater, how to ride a laugh and how to wait for it and, like, “Oh, I should come in on my next line right here.” It’s like surfing, and I really am enjoying the process. I also like the pre-shoot days, though, where there’s no audience and it’s more like doing a film or regular TV show. This is kind of best of every world, this format, the multicam: rehearsals, shooting without an audience, shooting in front of a live audience. And it’s just a playground on that Friday night. It’s like a carnival. You’ve got the comedian warming up the audience and music playing and writers coming in, throwing new lines at you, and you’re trying to memorize them. It’s incredible. It’s very exhilarating.

Are there a lot of new lines and jokes written when filming?
ALLISON: Yes. They call them “floor pitches.” And writers are most proud of their floor pitches because they are thinking right on the spot, like, “Oh, make her say this.” And then they go in, and then I say it, and they get their immediate response. It’s very rewarding. It’s really exciting for them and for everyone. I love it.

Another way to watch these shows is afterwards on DVD or on Blu?ray or digitally. Do you do that? Do you watch shows that you missed or liked in the past that way?
ALLISON: Oh, yeah, the binge watching. I’m big on that. I think I watched BREAKING BAD in one weekend. That is my ultimate new favorite way of watching anything, is just nonstop. What else did I do? GAME OF THRONES I did that way and BREAKING BAD. Those are the two I can think of off the top of my head. Oh, and HOMELAND. BIG BANG I watched a lot of, especially before I was coming into this show. I love watching it that way.

For you what’s the advantage of being able to see several episodes in a row?
ALLISON: It’s just so powerful. There are no commercials. You just fast?forward and go into it. It’s just immediate gratification, which we love as human beings. At least I do. It’s so satisfying to be able to choose when I want to stop watching, not when I have to wait for a whole week and think about it, like, “Damn” ?? when the show ends, you’re always like, “god, I have to wait till next week.” And this is just feeds your addiction right away.

What about your chemistry with Anna? What makes it special?
ALLISON: Anna, when I met her in Chuck’s office, I knew. I knew when I watched her in “House Bunny” and “Lost in Translation,” I could just tell that I was going to like her as a person. Sometimes you can just tell, by watching someone act, that you’re going to get along. And we do. We are similarly silly, and we like to have fun and not be too serious about anything. She’s been to my house for some barbecues a couple times and I’ve been over to her house. We like to hang out in our dressing rooms together and gossip and be silly and go eat dinner together before the show and talk. She’s very easy and very generous, and I’m lucky to have her as a costar. Her husband Chris is lovely, and her son. She’s got a really nice family. And I feel very comfortable with her. I’m lucky to get to work with her.

Bonnie’s kind of portrayed like a matriarch of this multigenerational family where everybody is still pretty youthful and that’s got to feel a little surreal at times.
ALLISON: It does. I can’t believe that I’m playing a grandmother, first of all, with the possibility of being a great?grandmother. I intend to make Bonnie the sexiest great?grandmother on the planet. That’s all there is to it. Blake Garrett Rosenthal, who plays Roscoe, I love every scene I get to do with him as Bonnie. Bonnie teaching him how to play poker, how to forge signatures. I’m just like, “Oh, my God. I love this family.”

What’s best advice you have gotten from your own mom?
ALLISON: I think the advice that has served me the best from my mother is to have good manners. “Good manners” has a wide definition in my mind of just being respectful of other people’s time and being respectful of people’s feelings, being aware of others. That encompasses all of those sorts of things. And my mother always just taught me to have good manners and be aware of people outside of ?? be aware of the people around you, and be considerate. And that’s served me.

What kind of advice would you like to give your character Bonnie?
ALLISON: Oh, Lord. What would I tell Bonnie to do? Gosh, I think she’s so perfect. I wouldn’t want to change a thing about Bonnie. I like to watch her just figure it out herself. I’d say just leave her alone. (Laughs)