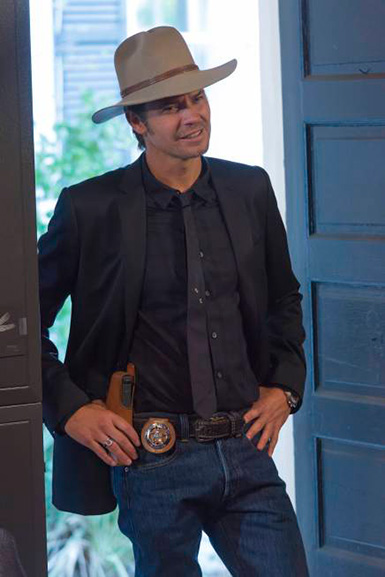 Revisiting Season 2’s favorite kid-in-jeopardy, Loretta McCready (Kaitlyn Dever) is back. But whenever Loretta is around, nothing is what you think is. She was trained by Mags Bennett (Margo Martindale) and the best criminal minds of Harlan County; so Raylan Givens (Timothy Olyphant) is naturally a little cautious about rushing to Loretta’s rescue when she is usually perfectly capable of rescuing herself. Yet not quite able to resist tempting fate, Raylan finds himself embroiled with Loretta while coming to the aid of one of her friends, which introduces him to Loretta’s fetching new social worker, portrayed by Amy Smart.

Then adding to the troubles stirred up by Loretta, the Florida branch of the Crowe family has decided to have an extended stay in Harlan as well. Now that Dewey Crowe (Damon Herriman) has come into a little money from his lawsuit, his opportunistic-extended family members from Florida feel that he should share the wealth. So Daryl Crowe (Michael Rapaport), Wendy Crowe (Alicia Witt), Danny Crowe (A.J. Buckley) and Kendal Crowe (Jacob Lofland) shall all be making an appearance to reacquaint with cousin Dewey.

As for Boyd (Walton Goggins) and Ava (Joelle Carter), things are not looking so good for them as the justice system seems determined to make Ava pay for killing Delroy (William Mapother) – especially if Boyd keeps eluding its grasp. But Boyd, being Boyd, cannot help but strike out when things do not go his way. After nearly beating Lee Paxton (Sam Anderson) to a blood pulp and leaving him for dead, Boyd is dodging the crosshairs of lady justice once again. Plus, all those big dreams of becoming the new drug supplier between Detroit and Harlan is becoming less and less of a certain possibility. Criminals just do not know how to play nice or even fairly – it’s not in their genetic make-up. So even a good plan on how to make money in the drug trade is more problems than it is worth, as both Boyd and Wynn Duffy (Jere Burns) continue to find out.

Finally, as if Raylan did not have enough on his plate with Loretta’s situation, the influx of Crowes looking for a quick score, and keeping tabs on Boyd’s dealings with the Detroit mob, Raylan tries to juggling being a long-distance father as well. With Winona (Natalie Zea) living as far away from Harlan as she can get to keep the criminal element away from her baby, Raylan is mighty distracted about how to do his job effectively and be a good father.

At last week’s Season 5 premiere, more of the cast took a few minutes to comment on their characters’ respective roles in this next season of JUSTIFIED:

With Crowes, criminals, and crime bosses all breathing down Raylan’s neck and setting up shop in Harlan, look for things to get explosive again real soon in JUSTIFIED. All new episodes of JUSTIFIED air Tuesday nights at 10:00 p.m. on FX.