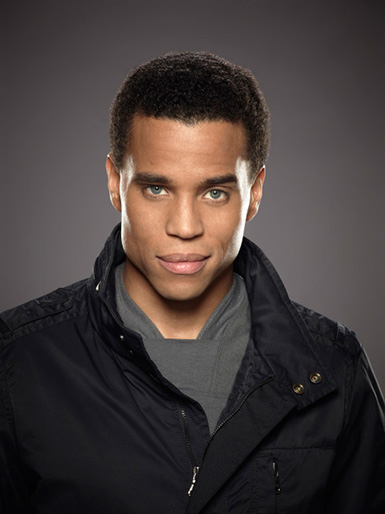 Fox’s new futuristic sci-fi series ALMOST HUMAN may be a fun buddy-cop show, but it also manages to address interesting issues of human/android tensions in working relationships. During press interviews at the Warner Bros. Mondo International Press Tour, star Michael Ealy shared what is like portraying an android in a human world and the joy of playing a character with such surprising humanity in his life.

Karl Urban talked about how Dorian’s been teaching Kennex to be kind of more human. Do you have a different take on that?
MICHAEL: No, absolutely right. Every day I try to teach Karl how to be a human. (Laughs) No, I think one of the things that was so compelling about the show was this idea that a machine could have more humanity than a human. It seemed so farfetched to me at the time, but that’s what also made it challenging. In hindsight and in learning what I’ve learned about Dorian ?? and I constantly call him, a reflection of the humanity that we all take for granted ?? and there are days when I personally am not the best human being that I can be –I now understand how we tend to neglect the humanity that makes us all equal. We tend to neglect that because we’re in a bad mood because somebody pissed us off and all these other things, and we don’t feel like we got a fair shot or whatever. That’s what Kennex is going through, and Dorian doesn’t have that baggage. That’s what’s so special about him. He doesn’t have that baggage. So what he brings is kind of a fresh openness that I find is, hopefully, more refreshing and influential when it comes to Detective Kennex.

Dorian’s not exactly a blank slate. He is always constantly referring to his previous occupation as if it was some, like, tainted existence that he had before. Like he’s trying to distance himself and trying to be a better person himself from before he was decommissioned.
MICHAEL: Oh, yes. What happened to Dorian before is interesting. What happened to his kind is even more interesting. Did they tell you what happened? No. So I’m not going to screw that up. (Laughs) But when we explore what happened to the DRN model, it’s fascinating. It’s absolutely fascinating. And it kind of helps you understand why Dorian is so eager with his second chance at being a cop and why he can be a little bit more concerned about going down the possible path that other DRNs went down and why he was decommissioned in the first place. So, he’s got a lot to prove, being the only one that’s doing police work.

What has been the most interesting conversation that the show has brought up?
MICHAEL: Interesting conversation. Off camera? A cameraman asked me if we would ever deal with race on the show. And I told him, “I hope not.” I feel like if Dorian were white, it would never come up. It would be about class at that point, I guess; right? So just because Dorian is being played by a black actor doesn’t mean we need to go run down the race episode. You know what I mean? So that provoked a lot of thought, actually, because nine times out of ten when you see a black man and a white man in a show, we’ve got to deal with racial issues. Or you see a white man and an Asian man; we’ve got to deal with the racial issues. It’s just that’s the American way, apparently. But this is interesting. This is 2048. This is the future. And I think it’ll be much more interesting if we walk away from that and just let it be what it is, because Dorian is a machine ultimately. He is a machine being portrayed by a black actor. But when does that stop making a difference? When does that not matter? So that was probably one of the more provocative conversations that came up on set off camera.

Home video offers us through DVDs, through Blu?ray, through digital ways to watch television shows all at once. Is that something you like to do?
MICHAEL: Absolutely. I do. I watched HOUSE OF CARDS in about three nights. You know, when I first started in television, my first show was SLEEPER CELL, and Showtime put it out there. This Netflix thing isn’t new. Showtime did that with SLEEPER CELL. We put it out there, all eight or ten episodes, all at once. You could either watch them weekly, or you could watch them all in one sitting. So I like to think that we were a little bit ahead of the curve at that time. And right now people watch, I guess, when they can. They watch when they can. And that affects certain shows. There’s no doubt about it. That affects certain shows. You need people to watch live. You really do.

What do you think are the advantages of being able to see several episodes, one after the other?
MICHAEL: I think when you’re able to see multiple episodes, you’re able to get a better idea of whether or not the show is for you, bottom line. If you see four or five episodes and you’re like, “I still don’t connect,” don’t watch the rest. You might see one and be like, “I love it,” and then the next two aren’t that good. And then you see another good one, and you’re like, “It’s a little inconsistent. I might watch it. I might not.” You might see one and hate the rest and be like, “No, thanks.” But I just think it’s important that if you want to watch it ?? and we’re asking people for their time — so we gotta make a product that’s worth their time. And I feel like people will watch when they have the time. That’s just a sign of the future. It’s not going back the other way, to the way it used to be. That’s for sure.

There’s some big sci?fi names working on this show. Did you feel like there was something that you needed to know, like picking their brain? Or do you feel like you just went your own way with it?
MICHAEL: Good question. When I first got this role, I thought, “Okay. I need to go just imbibe as much as sci?fi as I can,” because I’m not a big sci?fi guy. I’ll be the first to tell you that. I don’t have a huge background in sci?fi or comic books. I just don’t. And after my initial response, that I want to watch this and I want to watch that, I watched “RoboCop.” Let me correct myself. I tried to watch “RoboCop.” I loved it as a kid. I couldn’t sit through 10 minutes of it as an adult. And it just made me stop and say, “You know what? At the end of the day, this show, while it does have a sci?fi component, it’s about the relationship between Dorian and John and man and machine.” So I’m just going to play it ALMOST HUMAN and not worry about the technology that’s going to go on around me. I’ll let the experts deal with that. But what I’m going to bring to it is a fresh sensibility, if you ask me, that is not rooted in a deep sci?fi tradition. That might not work. But it’s the choice I’ve made to approach this character and this show.

All new episodes of ALMOST HUMAN air Monday nights at 8:00 p.m. on Fox.