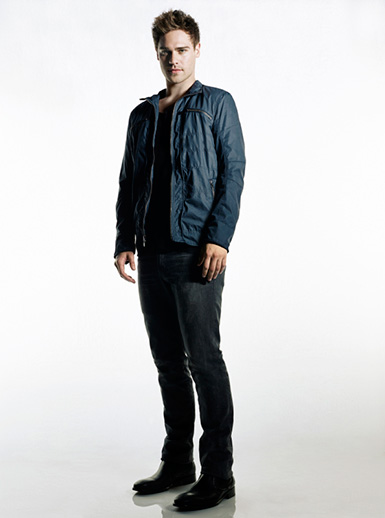 Unlike many stories where the school golden boy immediately takes umbrage to welcoming outsiders, the CW’s new series STAR-CROSSED threw in a curveball. In their story, the school’s most popular teen extends the olive branch and offers the new visitors his support. Perhaps it is because he wants to win the heart of the new girl in school, or perhaps he just does not think the newcomers are all that much different. Whatever the motivation it is a welcome surprise.

In an exclusive interview from the set, star Grey Damon talked about his character Grayson, a popular kid who surprises everyone:

As Grey describes his character, Grayson is a smart kid who is a bit naïve about how tense things are going to get between the Atrians and the humans with the recent government order to integrate into the high school. But he is pleased that Grayson surprises everyone by trying to handle things in such a diplomatic and responsible manner. Teenagers are not known for taking the higher road when it comes to politics, but Grayson is making the effort to be a better example of who humans should be in welcoming the Atrians. Unfortunately, since he has a more personal stake with his growing interest in Emery (Aimee Teegarden), perhaps being a good example may be harder than he thought. Grayson quickly takes notice of the growing attachment between Emery and Roman, one of the Atrian teens and it puts him in a bit of a competitive mode. Yet how does one win the heart of a girl who may be falling in love with an alien?

Despite the difficult human/Atrian relations on the show, Grey happily shared that working with his castmates on the show was a much easier and warm camaraderie-filled experience. He enjoyed working in such a respectful and loving environment.

When asked how humans today would actually welcome extraterrestrial visitors, Grey admitted that it would probably be similar as depicted in STAR-CROSSED. As humans we are quick to greet that which we do not find familiar in a hostile and guarded manner, if not without outright aggression. That which we do not understand seems to invoke a need to protect ourselves before trying to welcome anything or anyone new. That is one of the prevailing themes of STAR-CROSSED: how humans respond to things they do not understand.

STAR-CROSSED may be about teens meeting new cultures and finding that they are caught between warring factions of political interests, but it is also about them discovering love. Young love is powerful and persuasive. It may just also be the secret ingredient to ensuring peace on Earth.

To see how successful Grayson is in his quest to secure Emery’s love and whether it will ignite more than jealous and competitiveness with the Atrians, be sure to tune in for all new episodes of STAR-CROSSED on Monday nights, starting February 17th, at 8:00 p.m. on the CW. You can read more about STAR-CROSSED here: STAR-CROSSED Scoop: Introducing An Alien Tale of Forbidden Romance, Forced Integration, and How Its Story Differs from ROSWELL.