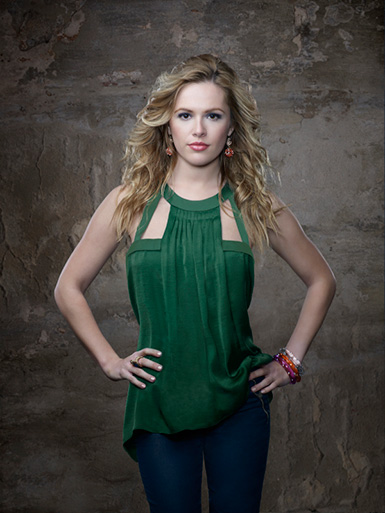 It is nice to be queen. In the new CW series STAR-CROSSED, Natalie Hall portrays the social queen of Marshall High. Her character Taylor is the one everyone looks to for the social cues and she can literally make or break any social circle. But in a nice twist, this queen-bee is deep down a very nice girl. There will be no mean-girl tactics on her watch; well, unless they are rightfully deserved. Taylor is not only the social leader of the school, she is the fashion trend-setter too. Confident in her style, her social prowess and her power to keep things running smoothly under her watch, Taylor is a force of nature.

So when the government mandates that seven Atrian teens are going to be attending Marshall High as a trial integration program, Taylor wants to be the first to welcome them. But what Taylor never anticipates is that one of the aliens is going to catch her eye. Love truly does blossom in the most unexpected of places. If anyone had told Taylor that her destined true love would be found amongst the stars, she would have been the first to scoff at the idea. That is until the day she found it does.

In an exclusive interview from the set, star Natalie Hall talks about Taylor’s uncanny knack at being drawn to bad boys, the joy of working with her co-star Greg Finley and how Taylor embraces the political challenges that have come to Marshall High:

What Natalie loves most about her character Taylor is that Taylor has a funny side. Being the Queen Bee of high school is great, but it is even better if she has a sense of humor. The other thing that really surprised her was what a big heart Taylor has – and it is that big heart that really gets Taylor in trouble. Well, perhaps “trouble” is too strong a word. More like gets Taylor in a complicated situation. The last thing Taylor needs is to fall in love with an alien, but the heart wants what the heart wants – and Taylor’s heart is head over hells in love with Drake (Greg Finley). It will not be obvious at first, but soon human/alien relations will be taken to an all new levels as love seems to beckon across the two species and no one can resist its call.

Simultaneous to the blooming love affair between Emery (Aimee Teegarden) and Roman (Matt Lanter) will be an even quieter one between Drake and Taylor – and “quiet” may still be the wrong word as their love will be explosive. Yet as passionate as Drake and Taylor’s physical attraction maybe, what surprises them the most is how it allows them to be vulnerable with each other too.

This is perhaps why Taylor sees Emery as more of an ally from the start and not a threat in her new world order at Marshall. She instinctively feels that they share a bond. Like Emery, Taylor is not afraid of the Atrians, instead she is intrigued by them; and once she feels the pull of attraction, she allows herself to explore that interesting possibility. Plus, once Taylor makes up her mind she wants something, she gets it. Life should not be about resisting temptation, but rather exploring it.

If only more humans were as adventurous and open-minded. The Atrians may be from another planet and they may wear tattoos, but they are an awful lot like the humans that they find themselves forced to live with. So while Taylor may be the social queen, a fashionista at heart, and a risk-taker in love, one of her special abilities is to be able to assess people. Human or alien, she can sense if there is something innately good about a person. Those instincts will prove valuable as she navigates the treacherous waters of an inter-species relationship; and we applaud how she will follow her heart no matter what the cost.

To see the lengths Taylor will go to in order to protect her new love, be sure to tune in for all new episodes of STAR-CROSSED on Monday nights, starting February 17th, at 8:00 p.m. on the CW.

You can read more about STAR-CROSSED here: STAR-CROSSED Scoop: Introducing An Alien Tale of Forbidden Romance, Forced Integration, and How Its Story Differs from ROSWELL.