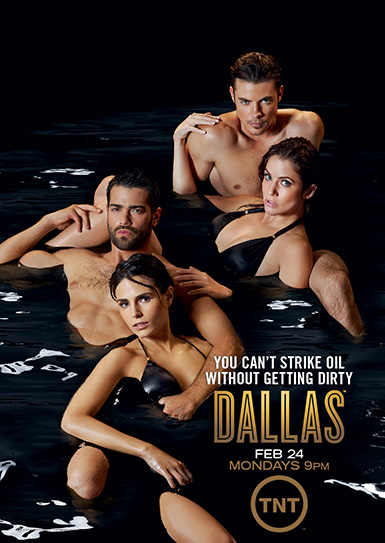 All the things fans love are coming back with a vengeance in Season 3 of DALLAS. Those wily Ewings and their many nemeses are back with blood feuds, scandalous sex, and big money deals. The world of DALLAS has never shied away from going big. It’s go big or go home. That’s their style and they feel perfectly at home amongst the vast prairies and oil fields of Texas, as well as the high-powered boardrooms and lascivious bedrooms.

The Season 2 heart-break of losing J.R. Ewing (R.I.P. Larry Hagman) is a shadow hard to overcome, but DALLAS remembers its roots and allows John Ross (Josh Henderson), the son of J.R. to take the spotlight as the show’s slippery hero with a devastating smile. It also showcases the other Ewings and their Barnes and Ryland counterparts with equal measure and allows each to carry a storylines deeply intertwined in each other’s lives.

John Ross, like his father, is obsessed with the Ewing family legacy. He not only wants to control oil, but seeks to conquer emerging fields of natural gas as well. He also wants to renovate the Ewing family home, as newly married, he thinks it is time to add some much needed elbow room in the house. But Bobby (Patrick Duffy) being Bobby, is determined to honor his mother’s wishes and keep the ranch house and farm intact, even if it means butting heads with his nephew. As for Sue Ellen (Linda Gray), she is just trying to keep watchful eye over John Ross to ensure he does not take the same dark path of his father. As for everyone else, they had just better be careful not to cross an Ewing. Bad things tend to come to those who get in their path.

However, with Harris Ryland (Mitch Pileggi) and Cliff Barnes (Ken Kercheval) behind bars (at least at the moment), that may mean that Pamela (Julie Gonzalo), Emma (Emma Bell) and Elena (Jordana Brewster) will be stirring things up for the various Ewing men. Haven’t they heard of the saying, “Hell hath no fury like a woman scorned”? The same can be true of a woman on a mission. Scratch a Texan woman and she will return the pain a thousand fold in ways you will never see coming.

In press interviews, the cast took a few minutes to talk about their characters and what fun things Season 3 has to offer in DALLAS:

To see what exactly newcomer Nicholas Trevino (Juan Pablo Di Pace) is up to and how he becomes integrally involved with the Ewings, be sure to tune in for the Season 3 premiere of DALLAS on Monday, February 24th at 9:00 p.m. on TNT. Texas oil is responsible for more burning passions than television can show!

To find out more about Season 3, be sure to check out these articles:

On the Scene: Deep in the Heart of DALLAS, Texas

(Note: This set visit and opportunity to interview the cast of DALLAS was provided by and sponsored by Warner Bros. Television.)

Based in Manhattan at 466 10th Ave (at 37th street), the station features gas at $1.98 per gallon — a price that drastically undercuts the local competition. DALLAS star Josh Henderson revealed the price when opening the station at 8:00am with an official ribbon cutting.

The station will remain open until 8:00pm (or while supplies last). Fans nationwide can also participate in this exciting event by visiting the Dallas Facebook page to enter to win a Black Gold gas card valued at $50.00.

New York readers are encouraged to head over for cheaper gas! And, of course, do not forget that Season 3 of DALLAS will premiere tonight on TNT at 9 p.m. (ET/PT).