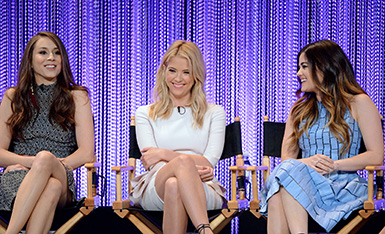 With the big Season 4 finale looming, it was fun to catch up with the cast of PRETTY LITTLE LIARS at this year’s PaleyFest to find out what is coming up in the love lives of the “little liars” and how insane this season’s finale is going to be.

Troian Bellisario mentioned her favorite couple is still Spencer and Toby right now, especially since they seem to be the only couple still together, as one has been on the rocks for Aria and Ezra, Hanna and Caleb, and Emily and Paige.

Shay Mitchell has a lot of love for her co-star Ashley Benson, who she cited as portraying her favorite character on the show. But when it comes to romance, Spencer and Toby claim that crown still. Shay is Team Scoby all the way!

Sasha Pieterse was very coy about Allison’s love life, but did not deny that Allison may have her eye on a special someone. After all two years pretending to be dead without a little human companionship is a lot to ask of a girl! Sasha also made to to mention that the Season 4 finale is going to have a lot of tension with crazy stuff, some of which is downright twisted. She thinks it may be there craziest finale ever. But on the plus side, there are going to be tons of answers for the fans.

Lucy Hale admitted that Aria has kind of lots her mind right now, but she is loving the chance to play something different. As for which couple she is still rooting for, hands down it is Aria and Ezra. Things may be up in the air between them, but she thinks they are the heart of the show and that there is a lot of love still there.

Keegan Allen was quick to admit that Spencer still holds the keys to Toby’s heart and he is behind that all the way. As for who “A” could possibly be if it were on of the girls, he has no idea but thought it was be shockingly amazing if it turned out that one of them were “A.”

Janel Parrish then confessed to loving playing Mona in such a way that the audience is always having to guess what side Mona is really playing for. But outside of Mona’s devious ways, Janel also loved having Mona and Mike together as a couple and hopes that is still in the cards for them.

While the cast seems to be firmly on the side of keeping the couples together and rooting for love, they are absolutely not sure where the story is going next. They could only promise that the Season 4 finale is going to be amazing and twisted fun. They, like the fans, are dying to see what Season 5 will bring next summer.

In the meantime, be sure to tune in for the Season 4 finale of PRETTY LITTLE LIARS on Tuesday, March 18th at 8:00 p.m. Will “A” finally be revealed? Is the “A” game over? And if it is, then what?