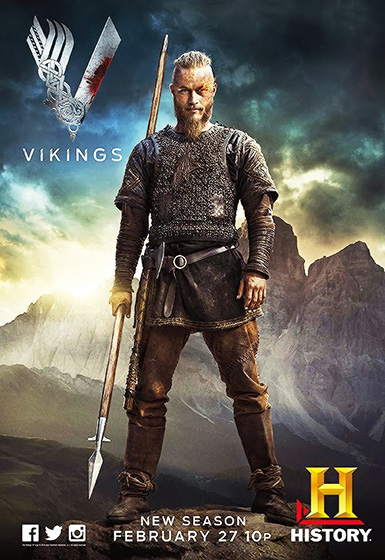 Press Release: HISTORY® announced today that it has picked up a 10 episode third season of the acclaimed drama series, Vikings. The renewal comes for the series created and written by Michael Hirst just four episodes into the second season. Six new episodes remain in the sophomore season, airing Thursdays at 10pm ET/PT, with the season finale scheduled for Thursday, May 1.

“With top Canadian talent both in front of and behind the camera, it’s gratifying that Vikings has become must-see television for Canadian audiences,” said Barbara Williams, Senior Vice President, Content, Shaw Media. “We can’t wait to bring viewers a third season, and to give this first-class creative team the opportunity to further explore the richly drawn characters and complex relationships that remain at the heart of the series.”

Vikings season one was the #1 specialty drama of 20131 and earned seven Canadian Screen Award nominations. Season two is currently the #1 Canadian specialty program2 among multiple key demos and is the #1 program on HISTORY3.

Production on season three will begin this summer to air in 2015.

Vikings centres on Ragnar (Travis Fimmel), a restless young warrior and family man who longs to find and conquer new lands across the sea and claim the spoils as his own. Now that he is an Earl, with more power than ever before, his desire to sail west and explore new kingdoms remains unquenchable.

Vikings is an international Irish/Canadian co-production being co-produced by Canada’s Take 5 Productions and Ireland’s World 2000. HISTORY broadcasts both domestically in Canada and in the U.S. MGM Television brings Vikings to global audiences, serving as the worldwide distributor outside of Ireland and Canada. Vikings is produced in association with Shaw Media.