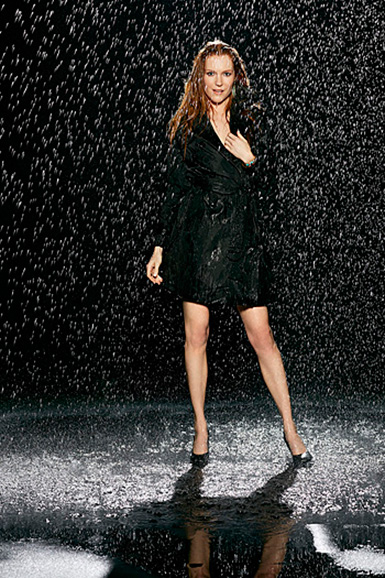 I spoke with incredibly talented actress, Darby Stanchfield about her role on ABC’s political powerhouse, SCANDAL. Darby describes her audition for the role of Abby, her opinion on Quinn joining B-613, and what we can look forward to in tonight’s episode.

In the past, you’ve guest starred on CASTLE, NCIS, and MAD MEN, have you taken anything from those shows or working with those casts and applied it to SCANDAL?
With every single TV acting job I’ve had, I take something away for the next. I definitely always look at every experience as a learning experience whether it’s a positive or a negative one. Fortunately, I’ve had mostly positive experiences. Whether it’s the dynamic or a certain actor you’re working with that might work completely different than you, or a really supportive set, or having to shoot an emotional scene at two in the morning. There is always something that I take with me.

How was your audition for Abby? Was the character a lot like the one we see on TV; did you help further develop her?
My audition for Abby felt really natural when I read the script, I felt like I really knew who this woman was. It didn’t feel like a big stretch, it just felt like I channeled a certain set of characteristics of myself. I think [with] Abby, as well as all of the other characters, there is an evolution of what I bring to Abby and what Shonda (Rhimes) and the other writers see. Shonda loves actors, even the writer’s love actors, so if they see you work really well with someone they try to develop those sequences together. If there is a characteristic of how you’re saying that line or what your behavior is like, or how you play out the scene, the writers see that and it definitely feels collaborative. I feel at the same time Abby’s had a very distinct voice that Shonda created from the beginning and I feel they have kept true to that.

Have you ever pitched an idea for a storyline to the writers?
Absolutely not! I often get asked, “What’s the thing you would like to see happen to Abby?” My answer always is that the writers completely blow any of my ideas out of the water; their ideas are so deliciously entertaining. I just feel full confidence in leaving it in there hands; I love playing with what they’ve given me. Sometimes we might have a talk on set that might have to do with continuity like ‘well does Abby know this information at this point, would she be this judgmental or does she not know?’ There might be small continuity things that we sort of address the day of shooting. The overall character and direction and story, they’ve got something going so good, it’s not something that I feel is lacking in anyway. I don’t feel unsatisfied or bored—I’m completely entertained. (Laughs)

Will we ever learn more about Abby’s back-story or about her marriage?
I keep hearing that that’s coming; we don’t get it by the end of this season, but going forward that’s something still up their sleeves to explore, I’ve heard from a couple of different sources that seem quite reliable. The writers plan out the season episode to episode, they write one episode and they don’t really have an idea of what they are going to do in the next episode. They have all of our arcs but then they also sort of write with what’s working and what’s cooking. I know what’s on their agenda; we don’t get it this season.

How would it have affected the show if David (Joshua Malina) had been killed instead of James? (Dan Bucatinsky) How do you think Abby would have dealt with that?
That’s a great question. I think that would have thrown Abby for a bit of a loop. David Rosen is the most normal relationship on that show; it’s really healthy. Within their conversations Abby will say things to him like “we don’t do that anymore, we don’t lie to each other, we don’t keep things from each other.” I think she’s experiencing a real, healthy, somewhat normal relationship with which she’s finding trust and experiencing love. I think if that were to be ripped out from under her it would make Abby sort of spiral and make her question everything. That’s something that’s keeping Abby really grounded and blooming, Abby in this episode really starts to bloom, she really starts to become Olivia Pope’s (Kerry Washington) right hand person. Olivia really turns to Abby, so if David had been killed I don’t know that Abby could be doing the job she set out to do in this episode.

What do you think about Quinn (Katie Lowes) joining B-613?
As a viewer it’s been highly entertaining and fun to watch this character rebel and go off into this other world and kind of come into her own in terms of confidence, special skills, and what she’s good at. In this point from what we’ve seen Abby doesn’t know, she doesn’t know that she isn’t a gladiator anymore. She doesn’t know all the shenanigans that Quinn has been up to. Let me tell you, later on in these next three episodes Abby and Quinn end up in the same room together a couple of different times and every time Abby has an earful for her and she’s snarky and she let’s her know exactly what she thinks. It’s really hilarious.

Aside from Abby which back-story are you most excited to hear about this season?
I really am fascinated with Vice President Sally Langston (Kate Burton) with what she’s experienced and her point of view. I feel like that character is really crazy (laughs) so I’m a little fascinated with what’s going to come out of her mouth next and where she might be going with running against the President and being the Vice President. That’s a really interesting situation that the character is in.

Your live tweets during the show are so great! Do you think twitter played a big role in the success of SCANDAL?
Yeah! I do, I think one of the reasons this show grew so explosively is the audience discovered it on their own in their own way. There was a great campaign that ABC did on terms of advertising our show, but it seems like it was more of a grassroots discovery for some people, that they talked about it around water coolers and they saw it on twitter. In fact, Oprah even discovered SCANDAL through twitter. She kept seeing SCANDAL being tweeted on her Thursday timeline and that’s how she discovered the show and she came to the show and did interviews with Shonda and Kerry, and did a whole special on it. Twitter is part of the SCANDAL experience for fans. For me on Thursdays I put my caps lock on and I kind of channel Abby and I say a bunch of snarky stuff and use a lot of emojis. That’s how every SCANDAL series writer, every star kind of has a different twitter voice, and I have found this Abby-esque sort of twitter voice that I just comment on the show in an Abby sort of way. It’s really fun, and it’s a nice way to give back to the fans, I feel like there was some sort of gradual request that started to happen in the early days with SCANDAL on twitter, we have a ball now.

Can you give us any spoilers about tonight’s episode? Can you tell us a little bit about why Abby is at the White House?
The presidential campaign is in full swing and there is some serious mud slinging that is happening, it’s messy, and Olivia is involved in her own personal crisis and she really needs help putting the fires out at the White House. That’s why Abby goes in there and Abby is not well received at the White House. She even wears the Olivia Pope white coat going in. She gets shot down pretty quick but by the end of the episode Abby has done more Olivia Pope things than you’ve see from her in the whole series. Within one episode you actually see her grow in her ability to be more of a political operative than an investigator.

You can watch Darby tonight (Thursdays) on SCANDAL at 10PM on ABC (City in Canada), and you can follow her on twitter at @darbysofficial